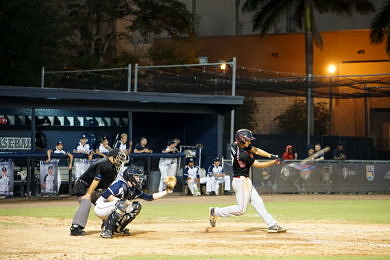 Andre Juhasz had four hits and three RBIs in the win.

The Monarch Knights spoiled “Senior Day” for the University School Sharks with an 11-5 win on Tuesday night. The Knights answered back from a shutout loss handed to them by these same Sharks a season ago.

The Knights came roaring back in the top off the fourth to take control. Diovanni Mateo drew a lead-off walk that later led to a sailed pick-off throw that moved him to third base, where he then scored on a wild pitch.

The rally continued thanks to a Andre Juhasz single, and he scored due to some Sharks’ miscues and heads-up base running to make it 4-2. Duncan White then singled with a man on third to make it 5-2 Knights.

“They came out with great energy today,” Monarch manager Dave Hollingsworth said. “What I was pleased with most was the way they responded to University School going up twice in the game. We haven’t done a lot of that this year, but tonight we did a couple of times and won the game.”

University School struck early in the first inning, after Armani Davis got on base with a bunt single, and later scored on a double by Alex Wertman.

The Knights answered right back in the top of the second inning with two runs of their own. Juhasz and Dominic Dingus started the rally with back-to-back, one-out singles. Juhasz later scored on a wild pitch to tie the game. Dingus also scored later in the inning on a sacrifice fly by John Benitez to make 2-1 Knights. 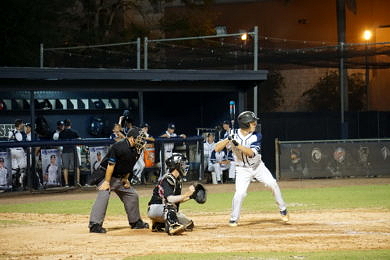 Alex Wertman Had a Huge Day Offensively at the Plate.

In the bottom half of the third inning, University School got something going. Senior Drew Snow led off with a single, but was later thrown out trying to steal. The Sharks got right back up with a walk to Davis, and then a single by Anthony Trotta to set up yet another RBI opportunity for Alex Wertman. Wertman delivered with an RBI single to tie the game at two.

University School also answered back quickly in the bottom of the fourth. Back-to-back leadoff singles led to an RBI base knock by senior Ryan Albright.

The Knights made a move to the bullpen and brought in Nicholas Marchione to get them out of the jam,

“I just needed to get some outs. That was my job,” said the junior right-hander. Marchione produced a fly out and a strikeout to end the threat.

The Monarch offense picked up where it left off in the top off the fifth inning. Duilio Baltadano led off with a hit-by-pitch, and later advanced to second on sacrifice bunt by Mateo. That brought up Juhasz, who was already having himself a day. Juhasz stroked one over the left fielder’s head for a double to give the Knights back a three-run lead. He finished the day 4-for-4, and just a home run away from the cycle.

“I wasn’t as confident my first two at-bats, but my last two I felt I had a better approach, and was able to come up with big hits there,” the freshman center fielder said about his night at the plate. 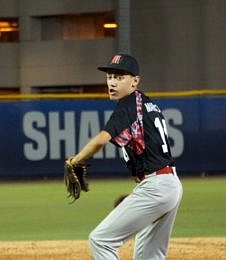 Nick Marchione got the win for the Knights.

The Knights tallied another five runs in the top of the sixth to break it open at an 11-3 mark.

Marchione kept the Shark bats quiet in their half of the fifth and sixth innings, but ran into some trouble in the bottom of the seventh inning.

After an Armani Davis single, Marchione got two quick outs, but the Sharks didn’t quit. Cameron McDuffy kept them alive with an RBI double, and later scored on a single by Lanel Delgado to make it 11-5. Marchione was able to regroup, and induced a pop out to end the game and get his first win of the year.

“It’s tough to compete when pitchers can’t throw strikes,” Sharks manager Josh Snyder said. “We had eleven hits so we probably should’ve scored a little more, but I think a combination of our pitchers being ineffective and not hitting with runners in scoring position was the result tonight.”

Snyder also had a few words for his seniors, Drew Snow and Ryan Albright.

“These two guys are the epitome of what hard work can do,” Snyder said. “They’re going to be playing college baseball next year and that says a lot. I’m super proud of them and I wish both Drew and Ryan the best of luck at the next level.”