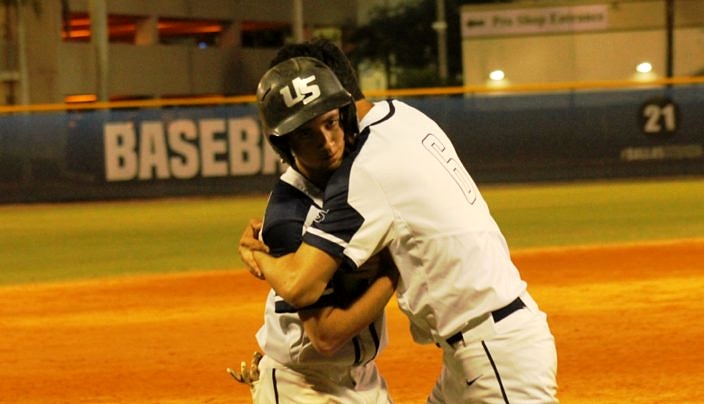 Jonathan Ostrow is hugged in celebration by teammate Drew Snow after his RBI triple in the bottom of the sixth that pulled the Sharks within a run.

The Lake Worth Christian Defenders made it a point to schedule as many challenging opponents as they could this season, to help better prepare them for the rigors of the playoffs. Thursday night the club traveled down from West Palm Beach to take on the University Sharks at Ian Besner Field on the Nova Southeastern University campus, in a non-district game against one of the toughest teams in the 4A state playoffs last season.

After the way his club responded with a balanced, 2-1 victory, Defenders manager Kraig Lawrence had a tough time finding anything to be disappointed by. Zjeanuwayne Braafhart and Alden Stacie combined for a great outing on the mound, while the club played mistake-free defense and also made the most of its few offensive opportunities against Sharks crafty left-handed starter Will Frank.

“Everybody played great,” Lawrence said. “I am just really, really happy for them. We’ve worked really hard and we’ve played some better teams this year, like Santaluces and Forest Hill, teams that are better for us. This is also only our second night game of the year, and it is tough and different for our outfielders who were having a hard time seeing the ball because they are not used to seeing it pass through the lights.”

The way the Defender pitchers were working on Thursday meant very few baseballs ever found their way into the outfield. Braafhart struck out seven in five-and-two thirds innings of work to earn the victory, while also scattering five hits and four walks. Lawrence admitted that he has a veteran pitching staff, which also includes the team’s starting catcher.

Stacie came on in relief in the pivotal point of the game, and he delivered to help preserve the victory. After Nicholas Pfister worked a two-out walk in the bottom of the sixth, Sharks pinch-hitter Jonathan Ostrow laced a shot deep to center field for an RBI triple that put the tying run ninety feet from home. But Stacie responded with a strikeout that left Ostrow stranded, and he struck out two more in a scoreless seventh inning that closed it out and earned him the save. 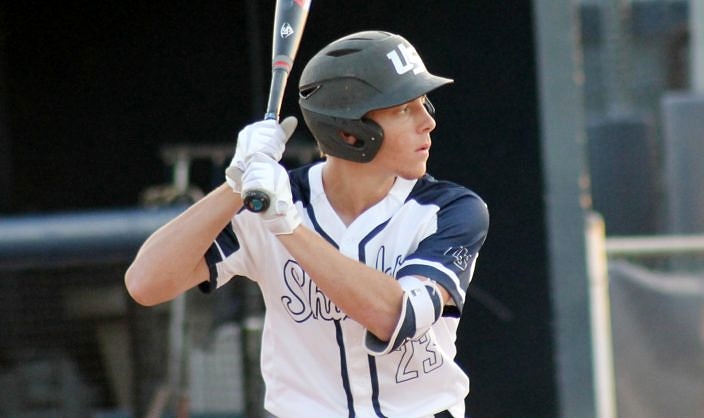 Alex Wertman reached base three times with a single and two walks for the Sharks.

Tahir Mulens accounted for both runs for Lake Worth Christian. The shortstop led off the game by dropping down an excellent bunt and then showcasing his speed to beat the throw to first base. Roy Glaum moved him over with a sacrifice bunt and Tanner Martinez drove Mulens in when he ripped an RBI single past the diving second baseman.

Mulens then scored the deciding run in the third. He started with a single up the middle, stole second and advanced to third on a throwing error, and then scored thanks to a sac-fly RBI from Stacie. Those were the club’s only hits on the night, however, thanks in large part to an excellent Sharks defense.

“Coming into the season we knew our defense was our strong point, that we have guys with plenty of range and good arms,” University manager Josh Snyder said. “Our defensive ability has been our best aspect, and our pitching has evolved. We are a younger team with a lot of guys without any varsity experience. Our starter, Will Frank, this was his longest outing of the year. He’s getting a little bit stronger, and any time a pitcher gets on the mound and has confidence in his defense he is going to throw any pitch that he wants. He has a catcher that blocks everything in the dirt and guys that want the baseball hit to them, and that is what you want.”

The defense executed the routine plays and even made some of the tougher plays look easy. First baseman Lanel Delgado found himself particularly busy on the night, with four unassisted putouts and an assist when he flashed the glove to make a nice play for a 3-1 putout that ended the sixth. This allowed Frank to do his part and keep the club in the game, as he allowed just three hits and struck out six in five innings.

The offense did not find as much success. Anthony Trotta led the way in going 2-for-3 with a double and a walk, and Alex Wertman had a single and two walks to reach base three times. The young batters know the playoffs are approaching and every at bat will be crucial.

“They guys are hungry and they keep grinding every day, and it is a resilient group. I guess that is the good thing about being young,” Snyder said.