West Broward Comes Back For 3-2 Win Over Nova 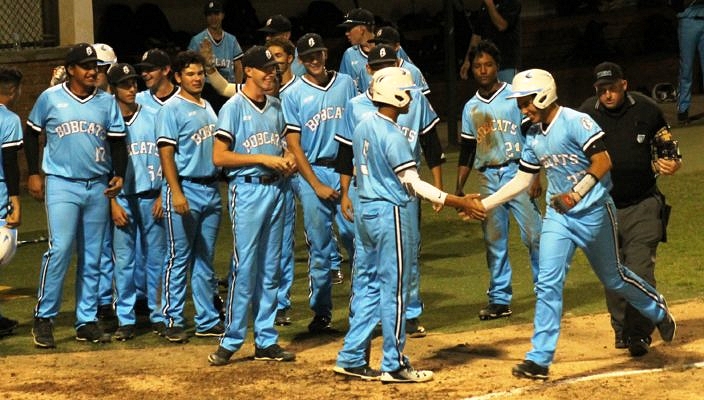 The Bobcats congratulate Roberto Lopez after his two-run home run that put them ahead with the winning runs.

With the playoffs now right on the brink, every team is looking to build a little positive momentum to help carry it through the challenges ahead. Even despite a strong regular season, the one thing that has dogged the West Broward Bobcats all season has been their inability to stage late comebacks. Wednesday night the Bobcats finally broke through to shake off that monkey and earn a 3-2 comeback victory over the host Nova Titans in a game they trailed most of the way, thanks to a two-run home run from sophomore Roberto Lopez in the top of the sixth inning.

Trailing by a run and up against Nova’s tough lefty ace, Trace Moore, Lopez came to bat with one on and one out after Alan Espinal reached on an error. Lopez connected on a drive that carried over the left field fence to entirely swing momentum in their favor, in what then stood as the final runs of the night.

“The previous at bat I got walked and we didn’t do our things in that situation. But then I just came up lucky with the right pitch in the right spot to do what I needed to do,” Lopez said. “This is probably going to help us, now that we have the district playoffs with the confidence of that. We can win those games and we don’t have to press after the fourth inning. We can come up and know we can play baseball to the end.”

In his final tune up of the regular season, Trace Moore may not have been his sharpest, but that stands all the stronger testament to the type of baseball player he is. Although the senior issued a season-high four walks, including one intentional pass, to go along with seven hits, he still managed to do his job well enough to go the distance for the eighth time this season. The southpaw allowed two earned runs and recorded four strikeouts, which inches him just shy of reaching 200 career strikeouts in his three-year varsity career.

West Broward found just enough offense to get the job done against Moore, its other run coming via a solo home run from Nick Hardy leading off the top of the second inning. The Bobcats (17-4) also countered with solid pitching of their own, as Danny Garcia allowed one earned run on two hits and a walk in three innings of work. Garcia was spelled by Hardy, who came out riding a blazing fastball that pounded the strike zone to help pave the way to victory. Hardy held the Titans (18-3) scoreless over the final four innings. 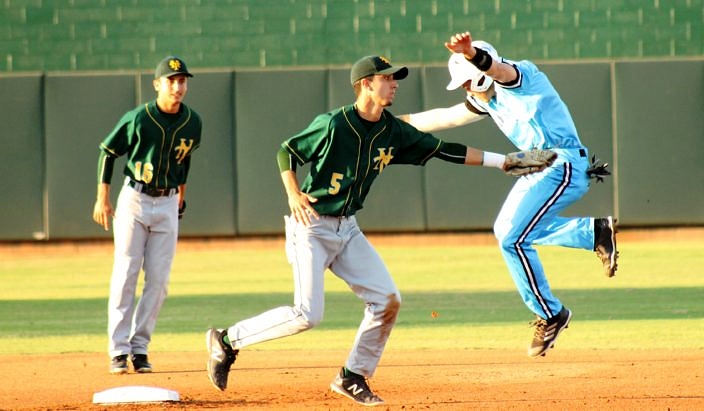 The Nova defense erases a West Broward base runner in the first inning.

“We were up 2-0, and we’ve got to be able to hold that lead, because it is playoff time,” Nova manager Pat McQuaid said. “We gave up that home run in the top of the sixth, and that is when we have to be able to close it out with our best kid. Meanwhile, their second guy struck out eight of nine batters in the last three innings, and you cannot win if you cannot get base runners. It’s as simple as that. We’ve got to hit the ball better. West Broward is a good team and they only have four losses, most of them right there in their district. We just need to go back to work and get a little bit better. It’s playoff time, so our bats have to be better going into the playoffs and hopefully the kids understand that now.”

Hardy certainly gave them every bit as tough a challenge as Nova will see in the playoffs. The junior right-hander worked fast and efficiently, while rarely needing his defense. Hardy allowed a hit and a walk while piling up nine strikeouts. After coming on in relief with his team trailing, he then earned his third win of the season after the Bobcats rallied back.

“I was just going out there trying to throw strikes and keep my team in it,” Hardy said. “I wanted to just pound the zone so they couldn’t hit it and win the game for us. After we had the lead I went out there with my same approach, to just pound the zone and blow it by them with the fastball and then roll the slider in there. I was focused in the bullpen and my coach had me right before the game, coming up to me and showing me the game plan of what was going on. It just helped me focus on the game and helped me throw strikes.”

As critical his performance on the mound was in the final result, it could not be forgotten how Hardy’s solo home run early on helped provide a spark to cut the early deficit in half for West Broward. Nova took the lead in the first, as Andre Martinez singled to center, Jared Campbell followed with a hit that ate up the infield defense and Matt Patella reached on an error that plated both base runners. But West Broward got out of the inning by getting a close force out with two runners on base, and then Hardy got his club on the board and swinging with some confidence with a solo blast over the left field fence.

“I saw Trace early before in the season and I knew all his stuff. I saw a 3-1 fastball and I just hit it right,” Hardy said. 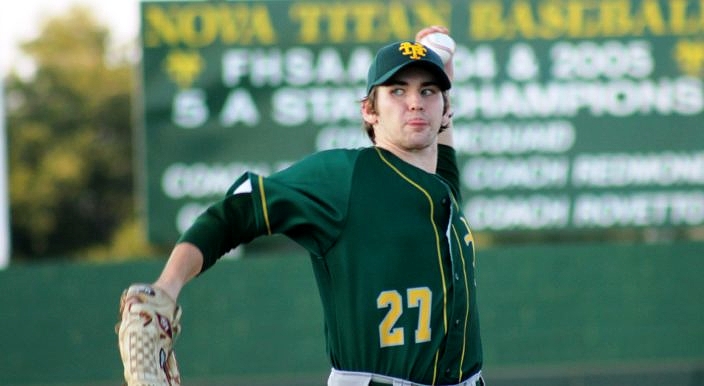 Nova senior Trace Moore made his 30th career start and his final regular-season start for the Titans. He allowed two earned runs and struck out four in his eighth complete game of the year.

West Broward won its second straight, and the Bobcats have won nine of their past ten games. First-year manager Howard Stein has the club playing well heading into his first district playoffs as the Bobcats skipper, and opponents like the Titans are exactly who the club wants to see to get ready for next week.

“It is always great coming to Nova and playing against Coach McQuaid, and it is always an electric atmosphere, and we played well,” Stein said. “Danny Garcia threw great, Nick Hardy was lights out and he came up with the home run early. Roberto hit a big home run and we pitched it well today. After the first frame today we really pitched it clean.”

As solid a year as West Broward has put together, it is a sign of the strength of its district that the team enters the district playoffs as the third seed behind both Flanagan and Cypress Bay. The team gets another shot at the Lightning as the next step in keeping its season going.

“We lost two one-run games to Cypress Bay, and they are a similar team to Nova that they pitch well and play good defense,” Stein said. “They are solid all around and we couldn’t get it done against Cypress Bay twice, but we came back in the sixth today and that is the first time late in the game that we won all year. So I think that is going to give us a lot of momentum going into that game.”