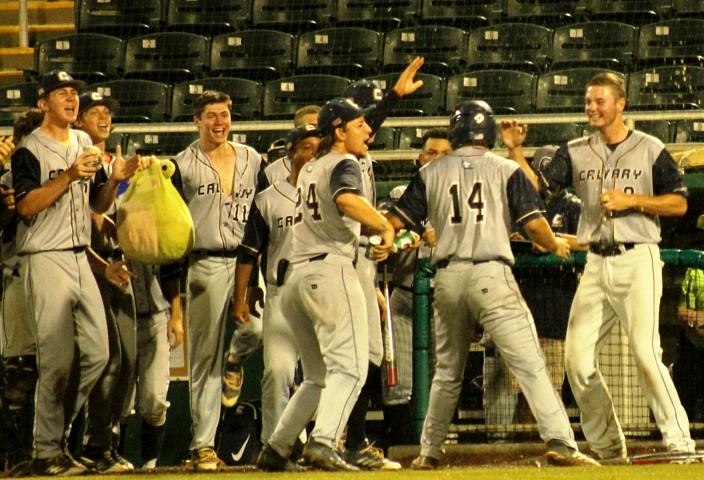 The Eagles celebrate with David Judge following his massive solo home run in the third inning.

When David Judge makes an impact in the ball game for the Calvary Christian Eagles, it is usually very loud. Such was the case late Wednesday night in the 4A state semifinal at Hammond Stadium in Fort Myers, as Judge made his presence known loudly with his bat. The first baseman connected on a mammoth home run in the third inning that provided some extra momentum, and the Eagles rode that to a 3-1 victory over the Benjamin Buccaneers.

Judge played a large part in the result. He also drove in the first run of the day with an RBI walk that scored Ben Rozenblum in the bottom of the first, and was hit by a pitch and scored on an RBI double from Mykanthony Valdez in the fifth. But it seemed that the moment his home run left the bat Calvary was in the driver’s seat to victory.

“That was a very big game-changer right there,” Judge agreed. “Our energy really boosted and we had all the confidence in the world to go forward. We were just doing our thing and Christian kept hammering the zone. He was getting outs and we were making plays and it was all good.”

The Eagles (16-15) advance to their second state title game, where they will face the Calvary Christian Warriors in a match up of the last two 4A state champs. The defending 4A state champion Warriors (30-0) also advanced to their second state championship following a 2-1 win over the Trinity Christian Conquerors in Wednesday’s other semifinal action. The meeting between the two sister schools brings a much-anticipated showdown between two of the most talented teams in the state.

“We’re excited,” Calvary manager Alan Kunkel said. “At the end of the day, it is a cool thing to see Calvary Christian versus Calvary Christian. For us to be able to lock horns with Calvary, and we both fly the same flags, we both love Jesus and we get to end the season on the field. Somebody is going to win and somebody is going to lose, but we are excited about that opportunity.” 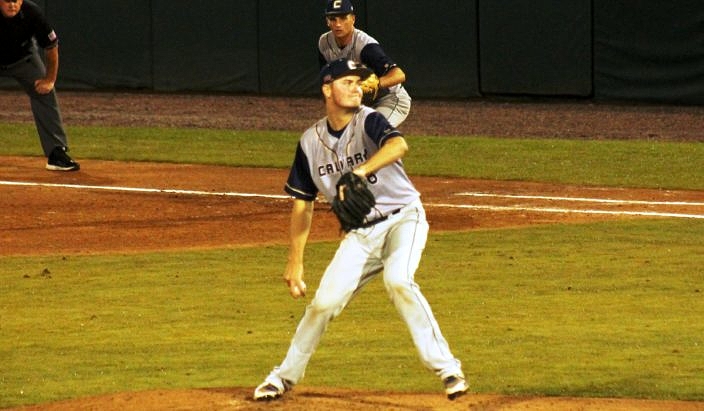 One of the most excited spectators for the action is the guy largely responsible for helping get the Eagles there, in senior hurler Christian Scott. The right-hander tossed a complete game on Wednesday in his final action of his impressive high school career. Two seasons ago it was Scott who pitched and won the team’s first state title, and Wednesday night he made his final start just as memorable.

Scott had command of the strike zone throughout, and he seemed to find his best stuff when he needed it the most. He walked three and struck out six, and managed to consistently work out of trouble to keep Benjamin scoreless even despite eight hits against him.

“It all kind of hit me at the end that this is my final high school season, and it was fun to come out here and grind with the guys,” Scott said. “It was competitive, but we have been here three years in-a-row so we kind of knew how to control the adrenaline. I think the experience definitely helped us with the game and how to control ourselves, not get too far ahead of ourselves and just focus on the next pitch.”

The Bucs threatened to break things open several times, but were unable to come up with that one big hit that got things started. They managed base runners in nearly every frame, but stranded six runners through the first six innings. They finally broke through to get on the scoreboard and suggest a different outcome with their final swings in the bottom of the seventh inning.

The Bucs (24-5) loaded up the bases to push Scott closer to his pitch-count limit. Jack McCluskey singled to left, Isaiah Thomas was hit by a pitch and Kris Armstrong singled to center. Paul Lanoce then battled in a great at bat to earn himself an RBI single on a liner to center field that broke up the shutout. 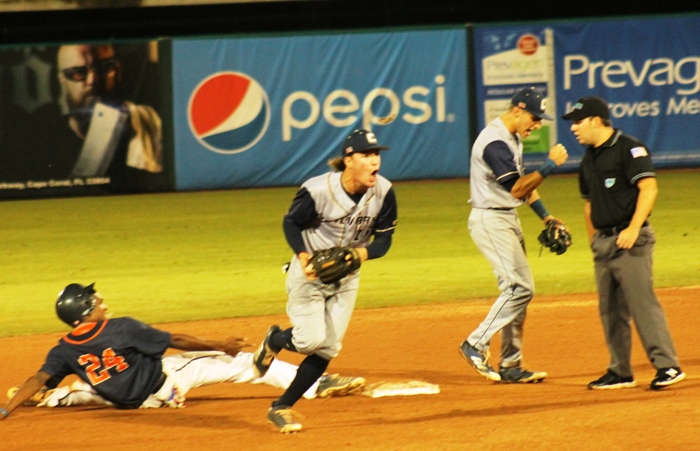 Roberto Pena races off the field after catching out a potential base-stealer in second inning.

But Scott dug in and struck out the next two batters to finish things off and send the Eagles back to the championship game. Now in order to be crowned the champ they must dethrone the current holder, a team that has won 60 straight games dating back to the start of last season.

The Warriors and Eagles missed a chance to compete against each other in last year’s title bout when the Eagles were defeated by Pensacola Catholic in the semifinals.

“This is what we wanted all year. We know we’ve got to be after these guys to finish it off and win states,” Scott said. “They won it last year, we won it the year before, so the third time is the charm. We’re trying to get it done, it is what we have wanted all year and what we have played for. It’s going to be competitive, and a lot of these guys play with each other in the summer. It is going to be a fun and competitive game and we hope to come out and give it our all, and we know they’re going to give it their all.”

Coach Kunkel recalled the tough road the Eagles went through during the playoffs. Calvary battled past two of Miami-Dade’s toughest in Westminster Christian and Florida Christian, while also enduring multiple weather issues that plagued the state during much of the regional playoffs. Games were started and then stopped, and rescheduled numerous times. It added further challenges to an already challenging situation.

“It’s so tough to get here,” Kunkel said. “It was the first time that we ever had to deal with weather like that with the new pitch-count rules. So we’re grateful that we had the opportunity to give Christian that start in a Final Four scenario.”