Cypress Bay Walks Off West Broward To Reach 9A-12 Final

Written by Sebastian Caballero on May 1st, 2018 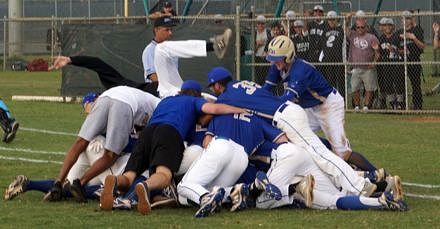 Cypress Bay punched their ticket to Regionals for the first time since the 2015 season.

Despite being down through the first six innings, Cypress Bay rallied in the bottom on the seventh and came away with a 3-2, walk-off victory against West Broward in Monday’s 9A-12 semifinal.

Jesus Pacheco drove in the winning run with a suicide-squeeze, RBI bunt in the bottom of the seventh.

The Lighting had swept the season series between the two ball clubs, but in post-season baseball everyone is 0-0 again, and the Bobcats aimed to win when it mattered the most.

West Broward struck early, as their first three guys reached base without putting a ball in play. They tallied their first run on a sacrifice fly by Nick Hardy. Later, Chad Shim drove in a run on a ground ball to second to make it 2-0 Bobcats, without producing a hit.

Bobcat’s starter Danny Garcia came out of the gates dealing. Cypress Bay struggled to get anything going against the senior right-hander. Luckily for them, after a shaky first inning, their senior ace, Ben Pelman, settled down and kept the Bobcats in check the rest of the way.

“The first inning I wasn’t fully warm,” Pelman said. “After that inning, I knew if I kept us in it, my teammates would get those runs back for me, and they did.”

Pelman carried a no-hit bid into the top of the fourth. It was broken up by Shim, who singled with one out. That was the lone hit Pelman allowed in his outing. 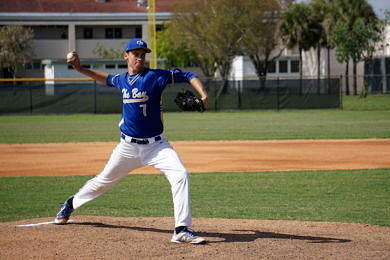 Ben Pelman allowed only one hit in six innings of work.

Cypress Bay still had a goose egg on the board entering the bottom of the fourth inning, as Garcia was pitching a gem. But in the fourth, Elliot Rodriguez got things going for the Lightning, leading off the inning with a single. Rodriguez then stole second and third, giving Ben Rushing a chance to drive him in. Rushing hit a deep fly ball to center, and Rodriguez was able to score easily on a sacrifice fly to make it 2-1.

Neither Garcia nor Pelman would give in, as both held the opposition in check heading into the seventh.

Pelman got into trouble as he walked the first two men he faced. Manager Bo Diaz elected to go to his bullpen and bring in Tyler Nejaime to get the Lighting out of the jam. Nejaime retired the first hitter via a strikeout, and then induced a line drive to first baseman Jake Pfundstein, who made the grab and had the awareness to dive back to double-up the runner at first.

Down to their last three outs, the Lighting skipper urged his team to leave it all out there.

The Lighting did just that. After the leadoff man reached on an error, Garcia walked Pfundstein to make it first-and-second with nobody out. After a sacrifice bunt, Caeser Franco drove in the tying run on a ground ball to second base. This made it first-and-third with one out for Jesus Pacheco. 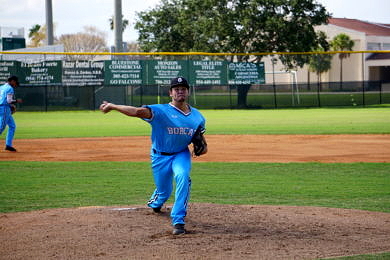 “Before I stepped in the box, I knew he was going to give me the sign. We practice that all the time and I am one of the best bunters on the team, so I was ready for it,” Pacheco said.

On the first pitch of the at-bat, Cypress attempted a suicide-squeeze to win the game. Pacheco laid it down perfectly, bringing in the winning run.

The loss ends a historic season for West Broward. Their 18 wins are the most by the program since 2012, only losing to two teams all year.

“We weren’t fundamentally sound today,” Bobcats Manager Howard Stein said. “We didn’t play our best game, and those guys took advantage of it.”

“They really battled all year. All of my seniors were incredibly. They showed great leadership and a lot of heart,” Stein said.