Eagles Call In The Calvary & March To Second State Title 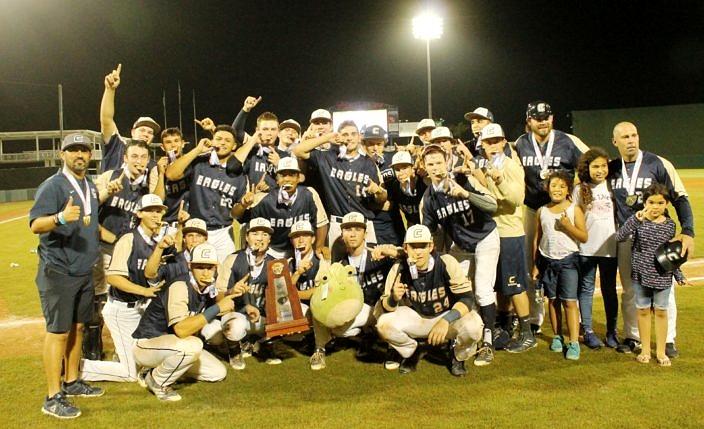 Something very special happened on Thursday night. Two of the most talented and selfless baseball teams in the entire state of Florida met in the Class 4A state championship, and they both showed up flying the same flags. The Calvary Christian Eagles from Fort Lauderdale took on the Calvary Christian Warriors of Clearwater, in a meeting of the past two 4A state champions at Hammond Stadium in Fort Myers.

The Eagles emerged 5-1 victors, writing the final incredible chapter that closes numerous storylines. The Warriors saw their two-year winning streak come to an end, while the Eagles (17-15) overcame forfeiture of numerous games earlier this season. But what mattered most was the brotherhood, that the two sides represented what they stood for by competing with all they had and then closing circled in a final prayer together. This was no civil war; this was baseball at its absolute finest.

“You’ve got to be so proud of your guys in how they kept their poise all year. I don’t know what kind of pressure Calvary-Clearwater felt, but it’s tough to win sixty-one straight games,” Eagles manager Alan Kunkel said. “We were relaxed, we came in swinging hot bats and we’ve been throwing the baseball well. They gave us fits, but through thick and thin our guys stuck together, and I’ve got to congratulate the senior class. They’ve done a tremendous job of forging great minds and creating the family that we wanted to forge.”

Tasked with pitching his way past a team that no hurler had succeeded in defeating in the last sixty straight attempts, Eagles junior Skylar Gonzalez delivered. The right-hander tossed a complete game while allowing one unearned run on four hits and a walk. Gonzalez struck out seven and also hit a batter.

“It’s a huge game, but in the bullpen I was talking with my coach and my fellow POs and you really just have to treat it like another game,” Gonzalez said. “You have to stay focused and you can’t let everything get to you. It was a loud atmosphere, so I just stayed in my mind and thought to myself. I didn’t let anyone come into my mind. It’s really exciting pitching in such a big game.” 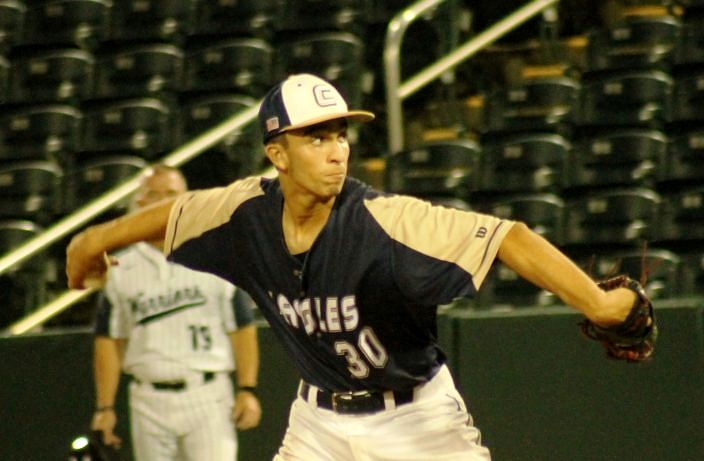 Skylar Gonzalez went the distance on the mound to earn the victory. He struck out seven and allowed four hits and a walk.

Gonzalez had command of his pitches and was able to dictate the tempo while he was on the mound. He settled in fast and never seemed to fall out of his zone, which helped to allow him to go the full seven innings for only his second complete game of the season.

“I didn’t expect to get that far, but it was just about throwing strikes,” Gonzalez said. “I found my two-seamer early and I worked off my two-seam, which moves one way, and my slider, which moves another way, to give them different angles. They have a really good lineup, so I really had to mix it up out there.”

The Eagles drew first blood right away in the top of the first inning. Raynel Delgado lined a two-out single to right field and Roberto Pena followed with a liner into the left field corner that sent Delgado racing all the way around the bases to score and fire up his teammates with the early momentum.

“I’ve been chasing this for four years,” Pena said. “Since the fall we’ve all had the same goal, we all love each other and we all have each other’s back. It’s incredible what this year has brought and I cannot describe it in words.”

The Warriors (30-1) are a team that thrives off defensive momentum, and that was the scenario that helped fuel them to their first run that tied things back up in the bottom of the third. After escaping a jam by turning a smooth, 5-4-3 double play in the top half of the frame, they got on the board when Sam Gordon lined a double past first base and then scored on a throwing error off a sacrifice bunt attempt by Eric Kennedy.

“This is the best group of men that you could ever be around,” Warriors manager Greg Olsen said. “Their heart is on display every single day, whether it’s practice or a game or at school. I’m very blessed to be their coach, and they’ve definitely made me better. We’ve just got an amazing group of guys.”

Things remained that way until the top of the fifth inning, when the Eagles loaded up the bases and chased starter Braden Halladay from the game. Ben Rozenblum and Dante Girardi both singled to left, and Delgado welcomed reliever Josh Emerson with a base hit to right that filled the bags. Pena then came through again, lining a single to center field that plated two runners to give his team a 3-1 advantage. 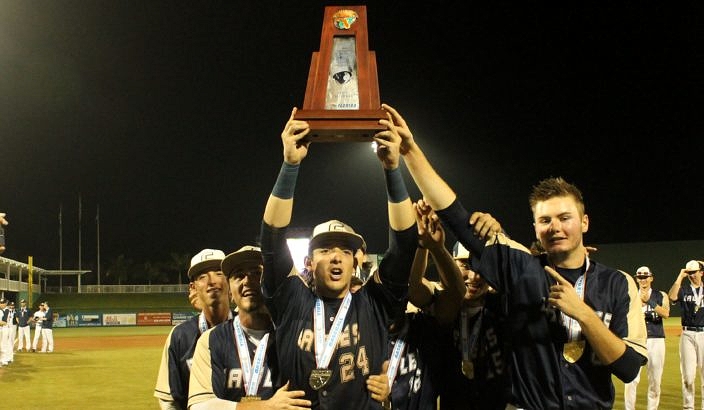 The Eagles celebrate their second state title in the last three years.

The Eagles added two final insurance runs late for some extra breathing room. Delgado walked and later scored on a wild pitch, and Pena was intentionally walked and scored when Ryan Keenan was hit by a pitch with the bases loaded for a tough RBI.

“It was a really good game. It did open a little bit there in the last inning, but it was a tight baseball game,” Olsen said. “They got a couple of two-out hits that were the difference, but that is baseball. If you turn on a baseball game on TV any given night that is the difference between winning and losing. Hats off to them; I thought their pitcher did a great job.”

One of the mainstays this season has been how each player did their job when called upon. The Eagles weathered adversity both on and off the field, and it only seemed to make them stronger. Kunkel noted how guys volunteered to go behind the plate and catch when their regular backstop was down with a minor injury, and how each player always seemed willing to do whatever was asked of him.

“It was great to be able to go to war and to coach a bunch of kids that not only dealt with some of the adversity that they have, but they have nonchalantly brushed it off,” Kunkel said. “At the end of the day, it’s the final seven games of the season that make the difference. They just wanted to play seven more games starting through the district tournament, and they got here. They got that opportunity, and it’s a really good group of kids. It’s a fun group that have really downplayed all of the distractions that could tear a team apart and they have embraced one another and built a strong family.”