Fort Lauderdale Rallies Past South Plantation In 8A-14 Semi 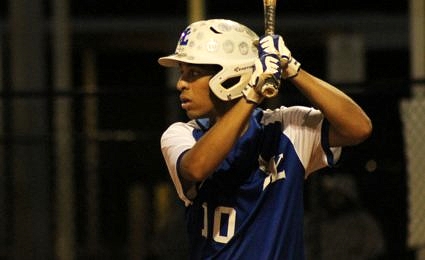 Rene Blanco drove in the winning runs with an RBI single in the bottom of the sixth inning.

Fort Lauderdale manager Terry Portice is not often going to allow one of his guys the green light to swing away on a 3-0 count.

Yet when the moment arrived late in Tuesday’s district semifinal against South Plantation, the Flying L’s skipper knew that senior Rene Blanco was capable of making something special happen.

Blanco did just that, lining a single into center field with the bases loaded to drive in the winning run, as Fort Lauderdale rallied back for a 7-2 victory over the Paladins.

“It was a 3-0 count, bases loaded, the score was 2-2 in the bottom of the sixth inning and I just knew that I had to do something,” Blanco said. “So the pitch was just perfect and I swung and it felt right. The atmosphere was great and everyone was hyped, and it really helped me get that hit. It felt great; I never felt a feeling like that before. My heart was racing so fast and everything was coming at me so fast. I was just so happy in that moment.”

The win propels the Flying L’s (15-9) into Thursday’s 8A-14 championship, where they will take on St. Thomas Aquinas. The Raiders also advanced with a 9-0 win over Piper in the other semifinal. Both teams also earned a berth into the regional playoffs, which begin next week.

“It feels absolutely outstanding to get out on the right side of this, because it wasn’t a textbook game tonight and so I am very elated to come out on the side we came out on tonight,” Portice said. 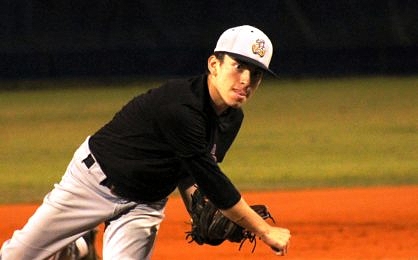 Early on it was the Paladins with all the momentum. South Plantation (7-11) broke out with a 2-0 lead after two innings of play, and starter Brendan Fogel stranded runners on base with a strikeout that ended each of the first three frames.

Fogel also played a large role on the offensive side of things. first he reached on an error to start the game, before courtesy-runner Kumar Lilman scored on an RBI single past third base from Brandon Holifield. Fogel then came through again with an RBI single that plated Jeffery Cohick, after the third baseman led off the second inning with a base hit and then advanced on an error into scoring position for Fogel.

Fort Lauderdale starter Cameron Pitzer settled in from there, and the left-hander went the distance for the complete-game victory. Pitzer allowed one earned run on five hits and three walks, and he finished with nine strikeouts for the second straight outing. But what Portice noted was most important was how his junior ace has grown and matured since last year and even the start of the season.

“Cameron is an incredible competitor and he pounds the zone,” Portice said. “He’s gotten much better discipline-wise and he’s not letting other things around him affect him as much. He’s grown so much this year in that area and I am just so proud of him for his maturity. Eight weeks ago that first inning with those few errors he might have been a little out of synch, and he focused on the next pitch, got through two tough innings and then settled in for the night and did a very nice job.”

It seemed whenever the Paladins made a move from there, Pitzer found a way to answer. Holifield was hit by a pitch and Robert Fernandez followed by smacking a double to left in third, but the southpaw quelled that threat with two straight strikeouts. Cohick walked and advanced thanks to a sacrifice bunt from Tyler Zirbes starting off the fourth, before Pitzer again retired the next two batters to end the threat. Again in the sixth it was Kyle Spohn with a double into the left-center gap, only for him to be stranded as the next two batters went down in order. 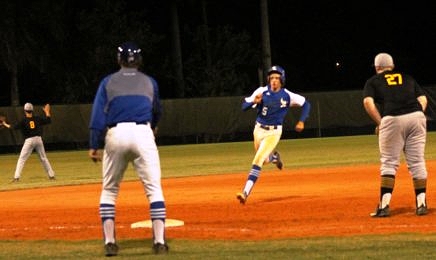 Kyler Johns pulls into third base before later scoring in the fourth inning for Fort Lauderdale.

This gave Fort Lauderdale all the opportunity it needed. Blanco helped tie the game back up when he was hit by a pitch, advanced thanks to a sac bunt from Spencer Regli and scored on a wild pitch in the fifth. His big moment then arrived after Aaron Miranda singled up the middle, advanced when Ryan Kanner unselfishly gave himself up with a sac bunt even despite having a single and a double on the night, Owen Sloane walked and Conner Batchelder singled up the middle to fill the bases. Blanco plated two, and Regli and Leandro Mastellone both reached on errors that allowed three more runs to score.

“We’ve had a very good season, and we have a really young team this year. We work hard, play together and it is just a solid effort overall. We deserve this as much as anyone right now for how far we’ve come,” Blanco said.