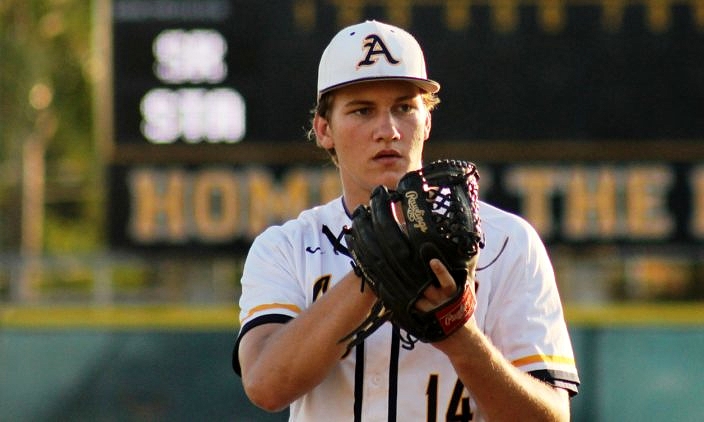 Blake Hely tossed a complete-game shutout for the Raiders.

Through the advancement in the game of baseball to current times, nothing ever seems simple on the baseball field anymore. With so many strategies and different lines of thinking nowadays, it is rare that occam’s razor is ever applied anymore.

In Tuesday’s home regional quarterfinal, St. Thomas Aquinas starter Blake Hely found that the most simple approach was the most logical. The right-hander attacked the visiting Spanish River offense, pounding the strike zone with pitch after pitch to work ahead and dictate his day. The result was a complete-game, one-hit shutout that was backed by plenty of offense, as St. Thomas Aquinas defeated Spanish River 12-0 at Ed Waters Field in Davie.

“Obviously it was a big regional game, and it was my first regional game. So I just wanted to come out and throw strikes,” Hely said. “We’ve been hitting all year, so I knew if I just did my job and filled it up they would do it for me. Our game plan coming in was just to attack. We had a good game plan coming in and I just had to trust Coach Tim calling pitches and just execute.”

Hely was not afraid to give the other team chances to hit the ball, throwing 44 of his 65 total pitches for strikes. Yet he surrendered just one hit, a single to right field off the bat of Sam Pirozzi in the top of the second inning. He also hit a batter but did not issue any walks. Although a few base runners reached via error, his defense responded by turning three double plays, which led to Hely facing only one batter over the minimum.

“He is a grinder and we know that every time he is going to throw zeroes-and-one, so all we try to do is put the ball in play and score for him,” Raiders shortstop Andres Antonini said of Hely. “We know he is doing his job, so now we have to do our job.” 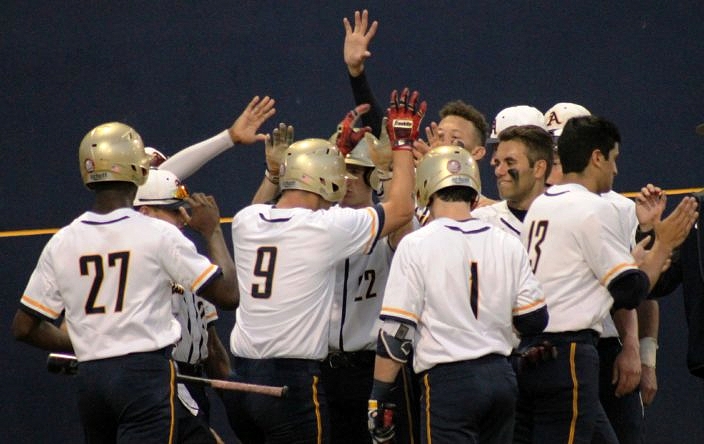 Raiders first baseman Riley Rosario is congratulated by his teammates after his two-run home run in the fourth.

Antonini and the rest of the Raiders (23-3) certainly did their part to back their starter, connecting for three home runs, including a game-ending grand slam from Antonini in the bottom of the sixth inning. It began right away in the bottom of the first, after Matt Archer connected for a lead-off double, Caleb Roberts drove a 3-1 offering over the center field fence for a two-run lead.

Three innings later it was Riley Rosario who got into the action, swatting a two-run home run over the left field fence. Catcher Nick Vera had gotten aboard with a double, and was replaced by courtesy-runner Raheem Salmon, who was able to trot home on the longball. Antonini then put a final exclamation point on the win, crushing a shot to center after Gabriel Terry and Wade Iben both walked and Archer singled to fill up the bases.

St. Thomas also managed to score four runs in the fifth on a few hits that barely stayed in the yard. Iben got it started with a double to left, and Archer and Antonini both reached to load the bases. Cade Fergus then delivered with a bases-clearing triple, before scoring on a sac-fly RBI from Vera that further extended the lead and made things that much easier on Hely.

“We put up ten runs in the last three innings, so as we kept putting up runs I just let my defense work, filled it up and let them get the outs,” Hely said. He finished with six strikeouts.

The Raiders advance to play at Coral Glades in an 8A Regional Semifinal on Tuesday, May 15th. The Jaguars defeated Fort Lauderdale 7-1 on the other side of the bracket to also advance. 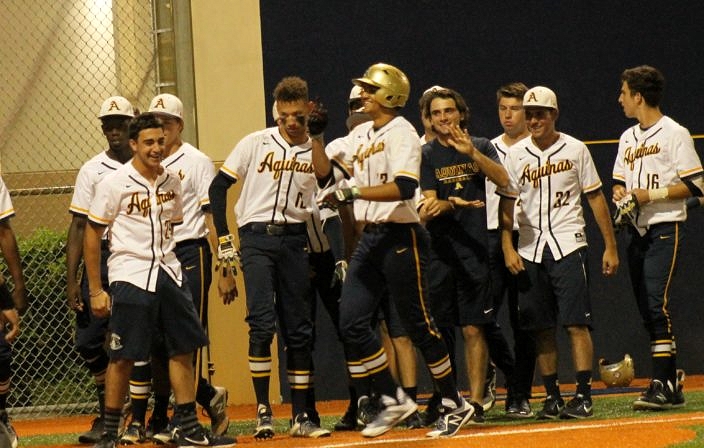 Andres Antonini crosses the plate after finishing off the Raiders’ win with a grand slam home run.