For the second week in a row, the HSBN Broward Game of the Week was won in walk-off fashion.

A gutsy call by McArthur Manager, Oddibe McDowell, a suicide squeeze play was executed to perfection by Joseph Desanctis to win the thriller 4-3 for the Mustangs in the bottom of the 8th inning.

“It was the right guy in the right spot,” McDowell said about his decision. “You have those moments throughout the game when you’re trying to predict what’s going to happen, and it was the right situation, and we executed.”

A much anticipated matchup between two district rivals, lived up to expectations.

The Mustangs wasted no time getting on the board, as a two-run homerun by Andres Dilone in the first inning gave them an early lead.

“I was looking for a first pitch fastball and that’s what I got,” said the senior first baseman. 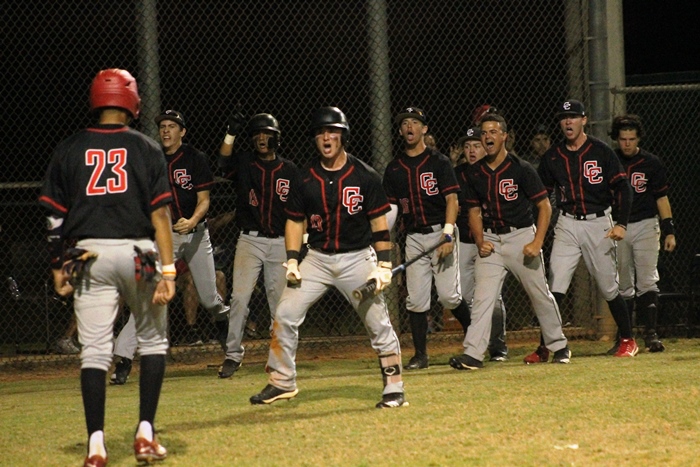 Despite the rough start, Cooper City ace, Jonathan Piaggio, was able to bounce back keep the McArthur bats quiet for the next few innings.

His counterpart, Kevin Iler, was dominant throughout, not allowing a baserunner until two out in the top of the third inning.

Iler was even  able to help himself out in the bottom of the fourth inning when he smacked an RBI double down the right field line to extend the Mustangs lead to 3-0..

However in the top of the sixth, the Cowboys finally got something cooking against the Mustangs’ ace.

After loading the bases, Cooper City right fielder Zayne Centi lined a ball in the gap to drive in two runs, to make it a 3-2 game.

Needing a quick inning on defense, the Cowboys sent their ace back out to keep the deficit at one.

“Piaggio is a bulldog,” Cooper City Manager Brian Clark said about his ace. “We told him if someone got on, we were taking him out, and he said ‘I’m not coming out, and he was able to get us out of the inning.”

The Cowboys picked up where they left off in the seventh, loading the bases with no one out. The rally was momentarily cut short when McArthur reliever, Yordys Valdes, was able to induce a groundball, and his defense turned a 3-2-3 double play. Just when the game seemed to be in the hands of the Mustangs, the Cowboys tied the game on a wild pitch to take the game to extra innings. 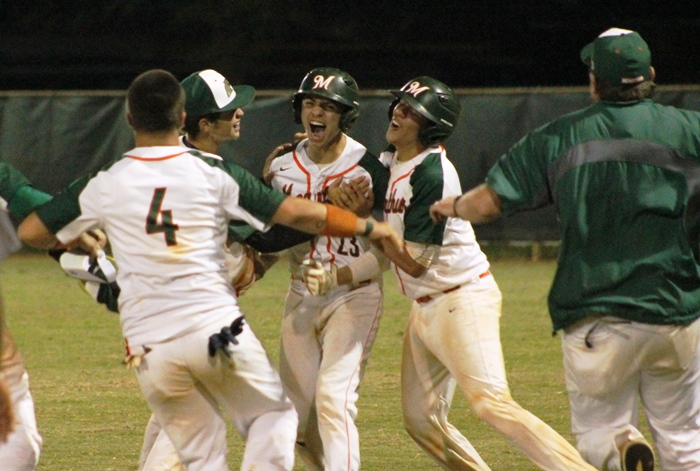 Both bullpens did all they could to keep their team in it, but in the bottom of the eighth, McArthur was able to load the bases with one out, and up came Desanctis.

“I was ready for it. I was just looking to put the bat on the ball to help us win the game,” the junior said before the suicide squeeze play.

Dilone who was on third took off on the pitch, Desanctis squared and laid down the bunt perfectly, and allowed the winning run to score, and seal a hard fought victory for McArthur.

The Cowboys look to bounce back this Friday with another big district game against Nova. McArthur is back at it again tomorrow against Everglades, and looking to improve to 4-1 on the year.