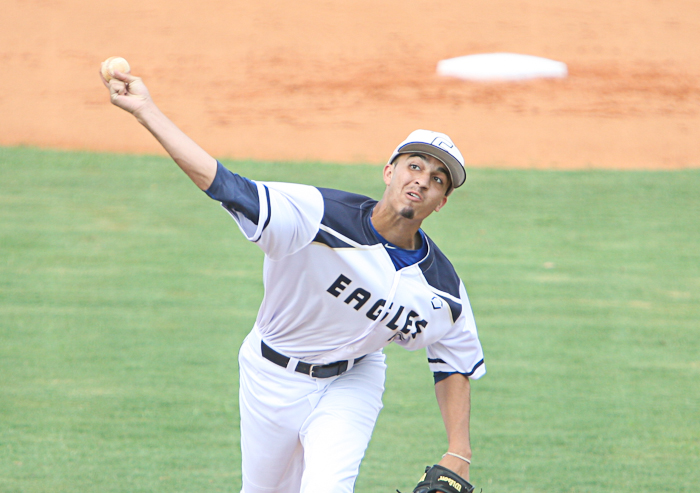 Calvary Christian Academy’s Skylar Gonzalez threw five strong innings and the Eagles broke a 2-2 tie with two runs in the fifth inning for a 4-2 win over the Westminster Christian Warriors in a 4A regional semifinal at home on Tuesday afternoon.

The Eagles (23-4) will play for the regional championship at 7 P.M. Friday at Florida Christian. The Patriots (20-8) were 1-0 winners over Westminster Academy in the other regional semifinal game on Tuesday.

Westminster Christian completes its season at 20-7.

“We had an early lead and gave it back but we were able to bounce back and respond the next inning and just put some pressure on them,” said Calvary Christian manager Alan Kunkel. “I felt like we put a lot of pressure on them the whole game. But you have to hand it to our seniors, they’re resilient, they’ve been in these situations a lot. So they never quit and they never give up.”

Ben Rosenbloom was hit by a pitch for the second time in the game to start a fifth-inning rally. With the score tied 2-2, Ryan Keenan followed with a single. Both scored, one on a bases-loaded walk to Jacob Howard and the other on a fielder’s choice ground ball off the bat of Tyler Knierim, who just an inning earlier had a solo home run that extended the Eagles’ lead to 2-0.

“Obviously in our ballpark the wind conditions come into play,” said Kunkel. “We don’t know what it’s going to be like. Some days the wind blows out, some days it blows in. Today it was blowing out to right field and I thought we had a good game plan. I thought our hitters executed the game plan well. We took some good swings.” 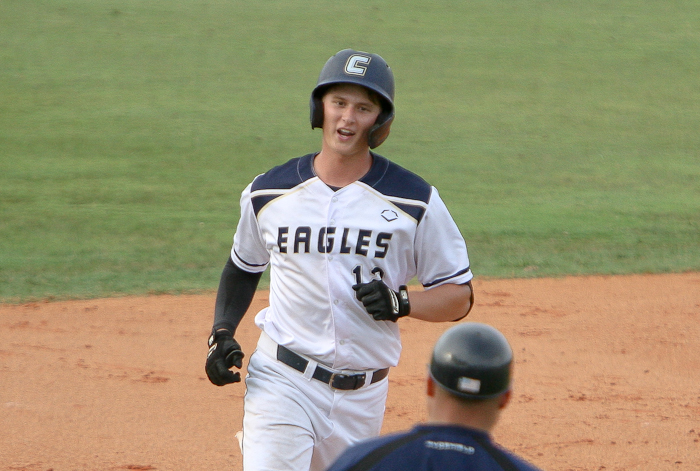 Knierim put a good swing on a fifth-inning fastball.

“(Westminster starting pitcher Kevin Martin) is a good pitcher,” Knierim said. “We know he likes to throw mostly fastballs. So on that pitch I was just sitting fastball.”

Knierim got what he was looking for, a fastball away, and he took it that direction into the wind and into the scoreboard beyond the right-field fence.

“I just took it where he threw it,” Knierim said. “We’ve been practicing (hitting that direction) the last few days, the wind’s been blowing out the same way. So practice works. Honestly, I thought it was a pop up, and it just kept carrying,” said Knierim, whose first thought after seeing the ball clear the fence was: “I just took a good pitcher pretty deep.”

The homer added to a lead the Eagles forged in the third inning. Ty Hollandsworth doubled and scored the first run of the game on an error.

But Westminster Christian fought back in the bottom of the fifth with a clutch two-out, two-strike, two-run single by Kevin Martin that tied the game at 2-2. Martin, who worked five innings on the mound, striking out five, chased home both Alek Jacomino and Richard Benitez with the tying runs.

Martin had two of the Warriors’ five hits. Raul Ibanez, Jamar Fairweather and Greg Penton added the others. Jack Barrett threw a perfect inning in relief of Martin, striking out one. 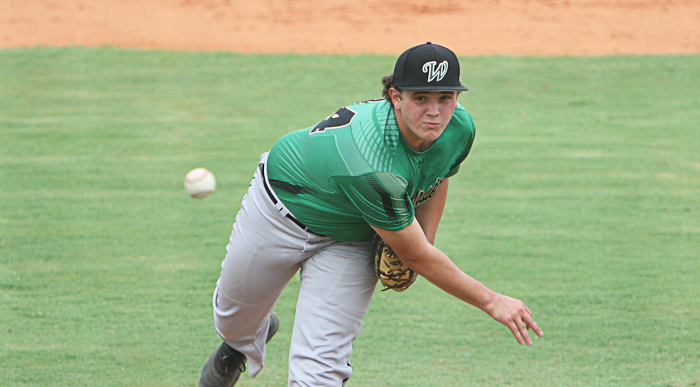 Westminster starting pitcher Kevin Martin went five innings, striking out five, and at the plate delivered a two-run single that tied the game on Tuesday.

The fifth-inning glitch was the only hiccup in an otherwise stellar performance on the mound from Calvary Christian starter and winner Skylar Gonzalez.

“They’re a good hitting team. They’re a good fastball hitting team, especially. I tried to stay out and away,” said Gonzalez who praised his catcher for calling a good game. “I only had to shake him off once and that’s telling that I don’t need to be carrying the team or anything; I have a great group around me. I had great defense behind me. It’s really nice to have a defense like that.”

Gonzalez threw five innings, striking out four before handing over pitching duties to Chase Cone, who worked two perfect innings to earn a save. Cone struck out five of the six batters he faced to close it out for the Eagles, who got two hits from leadoff batter Dante Girardi. Mykanthony Valdez also had a hit for Calvary Christian.