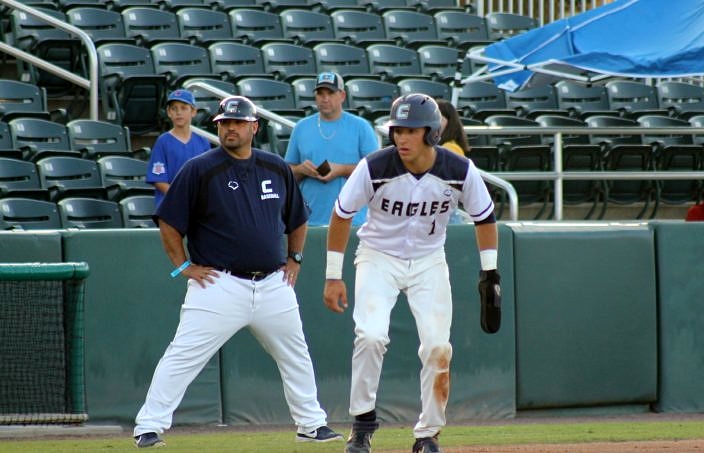 Dante Girardi creeps in rom third base, before scoring the Eagles’ lone run. Girardi was 3-for-4 on the night.

Nolan Hudi admitted that he does not think he has ever been more ready to go for a baseball game in his entire life. The rest of the Calvary Christian Warriors were right there with him, as the team again faced off against the Calvary Christian Eagles for a chance to be state champions again. Since losing to the Eagles last season in the 4A state final, the Warriors have worked solely to return and even the score.

Friday night they did exactly that, knocking off the defending 4A state champions with a gritty and passionate, 3-1 victory, in a 4A state semifinal at Hammond Stadium in Fort Myers. Hudi went the distance on the mound to do his part in sending the Warriors (25-4) back to Saturday night’s title game looking to add its second championship in the last three years.

“It’s been almost a year to the day that we lost to them and they snapped what would have been our 61-game winning streak. We wanted this game the whole year; the whole point of this year was to get revenge on them, and we did,” Hudi said. “That made the whole season worth everything, all the hard work we’ve put in. Together, when no one else is around every single guy works their tail off. So the whole year went towards this one game, and it feels incredible.”

Having two schools from the Calvary family enjoy this much success that they have developed a rivalry at the state tournament is unique and special. The common faith and fellowship mixed against the high caliber of talent on both squads led to excellent baseball, on a night that was a win for the Calvary community even before the game began.

“Rivalries are great, and we’d love to say that we’ll run into the them the next three or four more years,” Eagles manager Alan Kunkel said. “Two schools that are formed together for the purpose of making disciples for Jesus and you end up here in a state semifinal or a state championship on a year-in and year-out basis. For us to come four straight years and for them to come three straight years says a lot about the types of schools that we are and the type of development of kids and types of players that we have.” 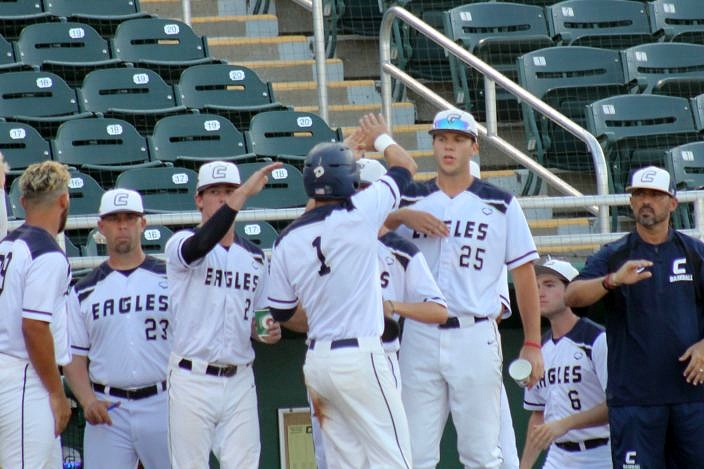 The Eagles celebrate after getting on the scoreboard in the bottom of the first inning.

Those types of players have helped the two teams combine to win the last three state championships in Class 4A, now with a chance of making it four years in-a-row.

“It’s great high school baseball,” Warriors manager Greg Olsen said. “We’ve got so much respect for their team and Coach Kunkel. We knew what we were getting into and it wasn’t going to be easy.”

The Warriors burst right out of the opening chute to grab the lead in the top of the first inning. Tommy White lined a two-out double down the left field line, and Vince Smith followed by putting the ball in nearly the same spot for an RBI double. Pierce Chambers then deposited a soft liner into shallow left field to push Smith across the plate for a 2-0 lead.

“They made some big plays and they had some extra-base hits,” Kunkel said. “We just didn’t get any extra-base hits going. I thought Dante Girardi did a great job against Nolan today, and all-in-all I thought we had some great at bats against him. We just trust the guys, and you go back a couple weeks and for us to come back from a 6-0 deficit against SLAM and do what we did in those last two innings when we just as easily could have not have been here. For us to continue to fight and scrape and put the at bats together that we did says a lot about the seniors,the pride and the belief these kids have in each other.”

The Eagles answered right back to cut that deficit in half with their first swings in the bottom of the first inning. Dante Girardi led off with a base hit to center, Ben Rozenblum was hit by a pitch and then Mykanthony Valdez put enough charge in a fly ball to allow Girardi to tag up off the catch and advance to third. Rozenblum initiated a double-steal and that allowed Girardi to break for the plate off the throw to second, to complete his trip around the bases and put the Eagles on the scoreboard.

The Warriors extended their lead with another run in the third, while also chasing Eagles starter Andrew Painter from the action. Cairo led off with a walk and then went from first to third on an errant pick-off attempt. Sam Gordon put down an excellent suicide-squeeze bunt that drove in Cairo while leaving the defense no options but to record the out at first. 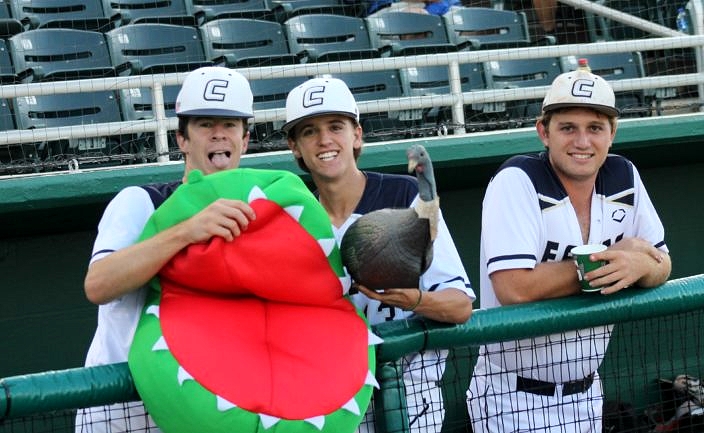 The Eagles share some of the magic mojo that helped fuel their playoff run this year.

White followed with a flare to the right-center gap to keep things going, and walks to Chambers and Hudi prompted a pitching change to Eagles senior Skylar Gonzalez. Gonzalez reponded to induce an infield grounder that ended the inning and minimized the damage.

A big defensive play helped the Warriors maintain that advantage. Girardi singled to center to start the third, Rozenblum reached on an infield single that also allowed both runners to advance a base off a throwing error. Valdez was then issued an intentional walk that loaded the bases to set up a force-out opportunity, and the Warriors turned a smooth 6-4-3 double play to quell the threat.

“You know about Nolan and what Calvary has done with him on the mound, and we knew coming in that he was going to be a formidable adversary,” Kunkel said. “He came in and he threw a great game. He is an emotional guy that runs on adrenaline and he made some big pitches to get out of some jams and they turned some big double plays.”

An inning later the defense produced the same result to quiet the Eagles again. Jacob Howard singled with one out, but then another infield grounder was gobbled up and turned into another 6-4-3 double play that ended that inning too.

Hudi continued to record outs and out things away. In the seventh he remained unwavering even after Howard led off by reaching on an error. A pair of infield grounders to second base led to two outs, and then an infield popout to shallow right was hauled in for the final out. 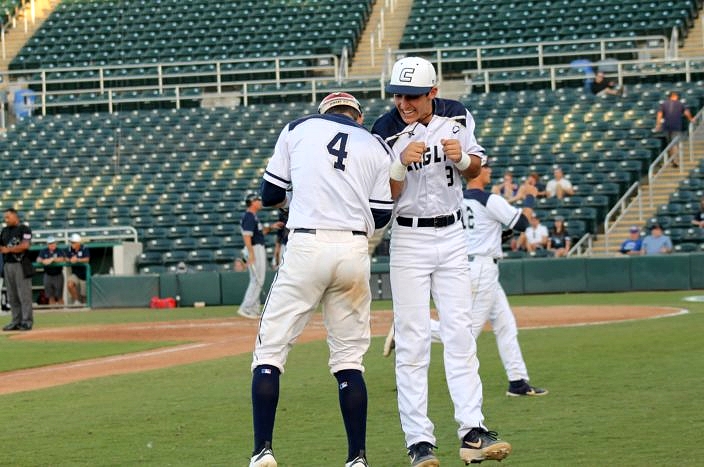 Ty Hollandsworth celebrates after making an impressive diving catch for the Eagles.