Sagemont Does It For Bill, Wins 2nd Straight District Title 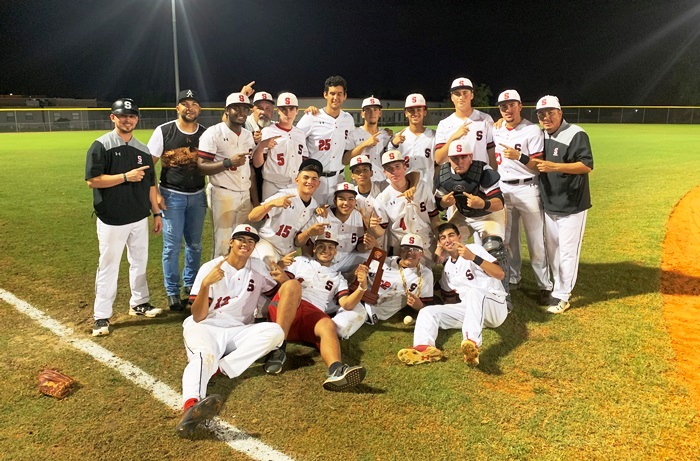 The 3A District 8 champion Sagemont Lions.

The Sagemont Lions could only hope that their biggest fan was somewhere out there watching and enjoying. Thursday night is a night that Bill would have enjoyed as much as all the other Lions fans.

Playing with heavy hearts following the recent passing of the team’s biggest fan, Bill, the Lions defended their 3A-8 title in winning back-to-back championships, as senior Armando Sierra’s complete-game shutout led Sagemont to a 2-0 victory over the Archbishop Carroll Bulldogs.

“Before the game I spoke to the kids to get them focused, and they told me that they did not need me to motivate them. They said, ‘We are motivated and our slogan is to Do It For Bill.” Sagemont Manager Armando Sierra said. “Bill is the bus driver who drove us to all our night games and he passed away last Thursday. He drove us to Archbishop McCarthy on Monday night and he passed away on Thursday. It was an emotional night for us. Bill was our biggest fan.”

The accomplishment came with an even larger reward than usual, as Sagemont has now advanced to the regional finals as well. Due to a disqualification to the team on the other side of the Class 3A Region 4 state playoff bracket, the spot has been vacated and Sagemont receives a bye into the next round. For the second straight year, the Lions (12-10) find themselves one win away from their first trip to the state tournament.

Armando Sierra allowed few opportunities for the Bulldogs (9-7), who managed just two hits on the night. The right-hander struck out four without allowing any walks, but did hit one batter. He needed just 74 pitches to go the distance, throwing 49 of them for strikes.

All the run support that was ultimately needed came in the bottom of the fourth. Lermit Pages lined a one-out single to left and Keshav Babu followed with an RBI double to center. Two batters later Babu came in thanks to an RBI single from Favyan Suarez.

Babu was 3-for-3 on the day, the only batter with multiple hits.