Sagemont Punches Ticket To States With 3A Final Win

Written by Sebastian Caballero on May 17th, 2019 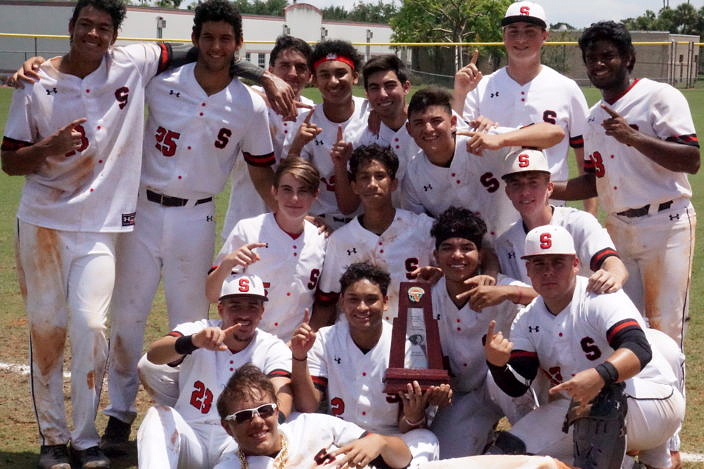 Sagemont heads to states for the first time in school history.

For the first time in program history, the Sagemont Lions are heading to the State final four. The Lions defeated the John Carroll Rams 1-0, in a pitching matchup between aces Nick Gorby and Armando Sierra.

“From day one, I’ve told our guys we’re gonna rely on our pitching and defense,” said Lions Manager Armando Sierra. “We’re not a team that’s going win scoring a lot of runs, but we’re gonna win a lot 1-0, 2-0 games because we’re going to throw lots of strikes and play good defense. And that’s what you saw today.”

The way both pitchers were throwing, both teams knew one run will get the job done. Neither pitcher was making that easy for their opponent.

Neither offense got anything in the first, as both went down in order.

In the top of the second, The Rams got a leadoff single from Spencer Adderly. The Rams advanced him to second, but Sierra was got out of the inning unharmed.

The Rams collected another hit in the top of the third, on a single by Jay Allen, but would be stranded as the Lions got out of the jam. The Rams Kelsey Ward singled in the fourth inning, but the Rams left him stranded as well. It would also be the last hit Sierra allowed the rest of the afternoon, which was exactly what he needed to keep up with Gordy on the mound.

“I’ve been doing this all year,” said Sierra. “I knew I just needed to stick with my stuff to get me through it. It’s been like this all year, defense making plays, knowing we would score eventually.” 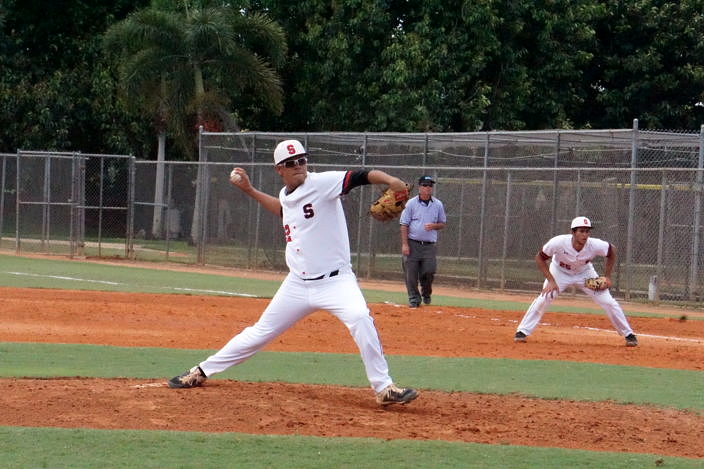 Armando Sierra tosses a complete game shutout in the win.

Meanwhile, Gorby had yet to allow a single baserunner through the first three innings. Gorby finally walked a batter in the bottom of the fourth, but got out of that inning without any damage.  Gorby pitched a scoreless bottom of the fifth, taking his no-hit bid to the sixth inning.

In the top of the sixth, Sierra got into some trouble after the Rams got a couple of runners on base. Fortunately for the Lions, the Rams ran into an out, when a ground ball made contact with their base runner to make the third out of the inning.

In the bottom half of the sixth, Sagemont finally got in the hit column, when Jonathan Vega singled through the right side to break up no-hit bid. Gorby got himself in a jam, but bounced back with a couple of strikeouts to get him out of the inning. This put the pressure and Sierra and the Lions in the top of the seventh.

Sierra didn’t get the start to the inning he wanted, hitting the leadoff batter with the first pitch of the inning. He quickly gathered himself and got the next hitter to line out to center. Needing to make another big pitch, Sierra got the Rams hit to into a 5-4-3 double play to get them out of the inning.

In the bottom of the seventh, Gorby needed a scoreless inning to send it to extras. He got the leadoff batter to ground out, and that brought Louis Zayas to the plate. The senior outfielder hit a groundball between third and short, and was able to get an infield hit for the Lions, now representing the winning run. The Lions then loaded the bases after a hit by pitch, and a walk. Zayas now was jut 90 feet away. On the first pitch, the ball got by the catcher.

“Takeoff,” Zayas said to himself on the play. “I told myself I had to score, and luckily for us it worked out.”

As Zayas crossed the plate, his teammates rushed to him ready to celebrate, as they walked-off to claim the regional title. 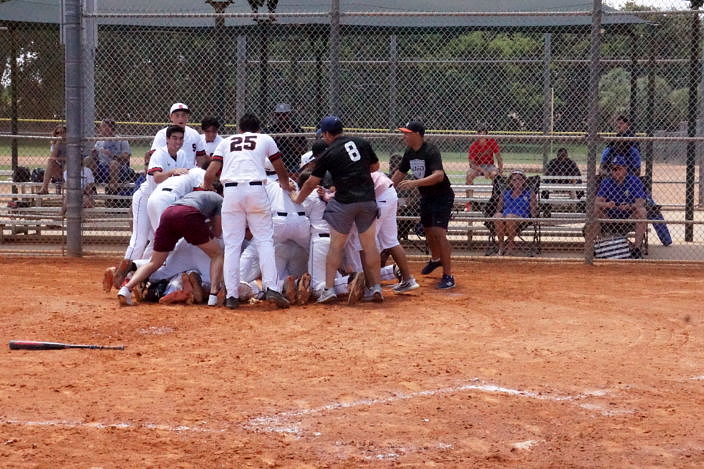 For John Carroll, their season comes to an end with a record of (20-6).  Rams’ manager Dan Taylor was proud of his guys, and spoke about his team after the game.

“I’ve been here three years, and most of them have been here the whole time,” said Taylor “These guys are back to back distrcits champions, and regional champions last year. This is one of the winningest senior classes in school history, and I couldn’t be more proud of them.”

Sagemont will now head to Fort Myers, and await their opponent in the 3A state champioship semifinal.