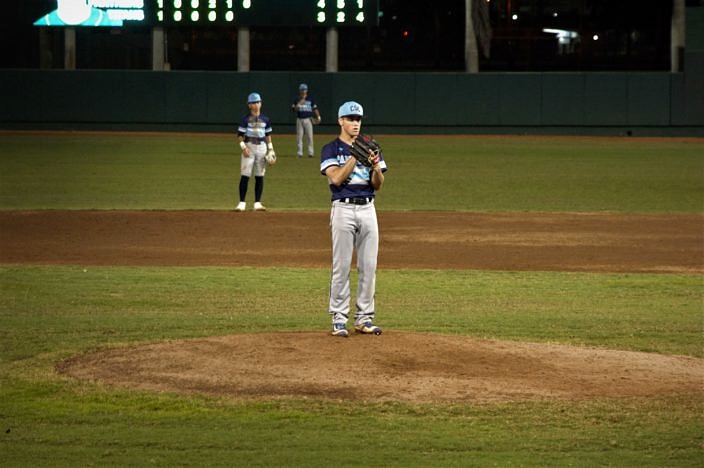 Joey Campbell gets set in the bottom of the sixth inning.

In a battle of unbeatens on Monday night, Coral Springs Charter, after giving up an early lead, battled back to defeat Nova 6-3.

“Our guys fought the whole way,” said Panthers Manager Charlie Fine. “We went down early and kept fighting on the way back, so I give my guys all the credit.”

The Panthers held the Titans to just three hits on the night behind the combined pitching efforts of Glenn Warden, Joey Campbell, and Chris Kahler.

“We have great competitors,” said Fine, “and all three pitchers that pitched today are great competitors. I just reminded them of that. They were all having trouble with the mound—their landing spot—but that’s going to happen. I challenged them to make the adjustment and they did. That’s what great teams do and it was great to see them do that.”

Warden started and settled in after surrendering three runs on one hit and four walks. He ended up going three innings, allowing two earned runs. Campbell pitched three scoreless innings in relief and came away with the win. Kahler got the save with a game-ending strikeout against Nova’s clean-up hitter Zakary Majer. 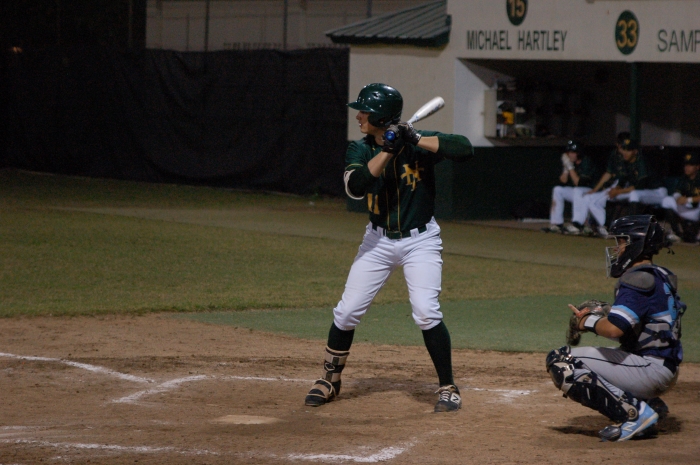 Zakary Majer digs in for his first at-bat of the night.

“I just try to breathe slowly and hit the zone,” said Campbell. “I had to hit my spots. I could tell they were early on everything, so if I just hit my spots, they were going to miss. They weren’t adjusting to it, so I just kept hitting the zone.”

Before Kahler came in for the save, Gavin Conticello provided Coral Springs Charter with some much-needed insurance runs. With one man on, Conticello connected with a Dylan Dorn fastball and took it over the right field fence for his first spring home run.

“I treat every at-bat the same,” said Conticello. “I try to stay focused and not do too much. Basically, I stayed true to myself, swung at a good pitch, and I hit it well.”

Aside from the seventh inning offensive spike, runs were hard to come by in this game. Titans Manager Pat McQuaid knows his team needs to clean up the defense moving forward.

“Well, we made four errors,” said McQuaid. “We were up 3-1 because we scored two runs on a passed ball and they made a mistake, and then we made two errors in the next inning to get them back in the ballgame.”

McQuaid described the defensive performance as “uncharacteristic” of the team, and he insisted that they’d be working on it tomorrow in practice. Despite the errors, McQuaid took nothing away from Coral Spring Charter’s performance.

“They’ve got a nice ball club,” said McQuaid. “They hit the ball, they put it in play. Coach Fine does a good job with their kids. He really does. Their kids came in, you know, and they threw three kids that threw strikes, and they’re undefeated.” 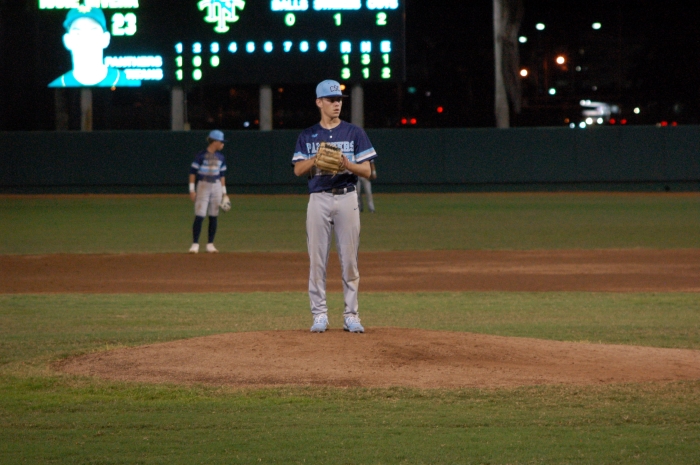 Glenn Warden finds his groove in a 1-2-3 third inning.

Even with their first loss, the Titans have started off above .500 at 2-1 in Pat McQuaid’s final season managing the squad. Videos sent in from former Titans honoring him played throughout several of the half-inning breaks. While the stories changed from video to video, the admiration for a legendary manager never wavered, especially from Charlie Fine.

“I cannot say enough about Pat McQuaid and what he’s done here and the precedent he’s set,” said Fine. “It’s an honor just to play against him, and I told him that at the end. To get a win was just incredible.”

The magnitude of his team’s win isn’t lost on Fine, but he wants to keep his team focused with back-to-back games coming up to close the week.

“We’ll celebrate this one,” said Fine. “This is a big one for us. This is a really good win. We’re going to celebrate this one tonight, but tomorrow it’s right back at it. We have two more tough game this week—Piper on Thursday, North Broward Prep on Friday—so we have to hit the grind hard tomorrow.”