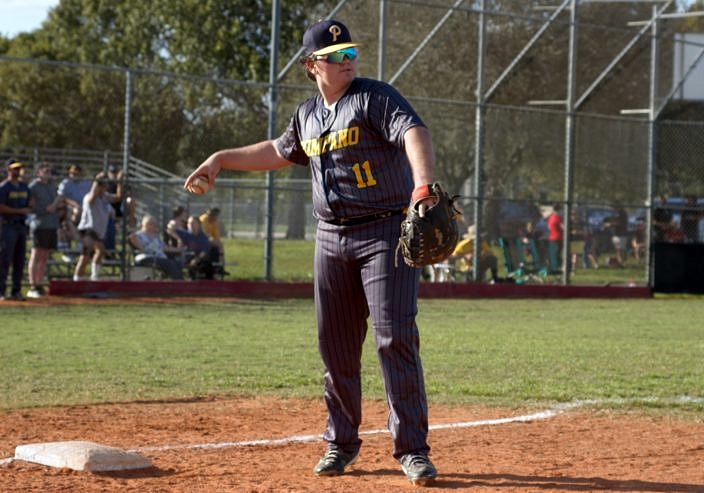 The Pompano Beach Golden Tornadoes and Monarch Knights players are familiar with each other. Aside from being self-described rivals, plenty of the players on both teams grew up playing in the same area. However, that didn’t stop the Golden Tornadoes from putting up a dozen runs against the Knights in a 12-4 victory Thursday afternoon.

After starting the season 1-2, Pompano has put together a three-game win streak with victories over Coral Glades, Hollywood Hills and now Monarch. This is also the second consecutive game that Pompano has managed to earn double-digit runs.

One of the main reasons the Golden Tornadoes have been able to produce so well at the plate recently is senior first baseman Matt McCrory. In his team’s last two games, McCrory has driven in 11 runs on 6-for-6 hitting with two walks. His biggest at-bat came of the week came in the top of the seventh on Thursday, and McCrory delivered big for his team by scorching a ball over the left-field fence, bringing the two men on base home. He finished the day with 7 RBIs. 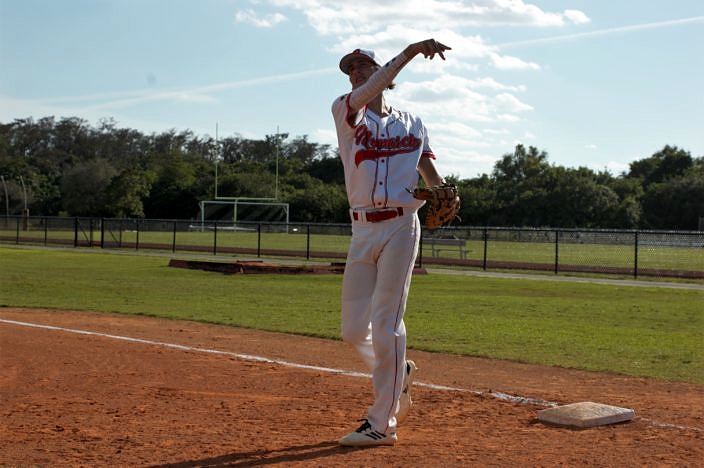 On top of his offensive dominance, McCrory also finished off Thursday’s game on the mound in relief of senior Riley Skeen. Skeen, a Broward College commit, threw five innings of three-run baseball and walked away with six strikeouts and the win.

“Coming off a loss to Gibbons, I really wanted to do the best I could,” said Skeen. “I was really reliant on my team because I know that they’ll have my back regardless of how I pitch. But I think today I was pretty sufficient.”

Skeen is one of the team leaders, according to Cohen. If there’s passion coming from the dugout, it’s usually because the “engine” of the team, Skeen, started things up. 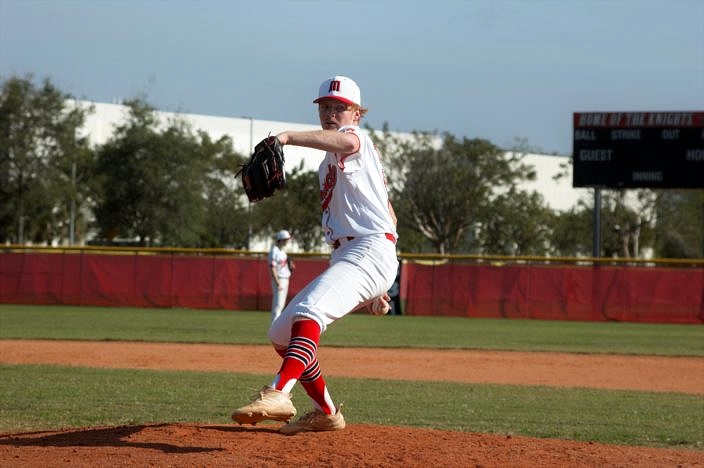 Duncan White on the mound for the Monarch Knights.

Monarch’s starting pitcher, Duncan White, is also committed to Broward College. He was charged with five earned runs on four innings of work. White will share a dugout with Skeen next year, but it won’t be their first interaction by any stretch of the imagination.

“I grew up playing with these kids,” said White. “They’re all from my area and we played little league together. So, it’s friends playing friends, but we beat ourselves today with mental mistakes.”

The loss was Monarch’s first of the year after beating Deerfield Beach, Northeast and Taravella to start the season. Despite scoring the first run of the game in the bottom of the first, the Knights were unable to get a runner across the plate again until the fifth inning.

“We’re going to use this as a wake-up call,” said Knights manager Mike Schmitz. “It’s early in the season. We want to try and win every game, but we’re not going to put too much emphasis on it. I want to use this as a learning experience and not come down on them negatively. Positive criticism works better than negative criticism.”

After the game, Schmitz said that his team struggled to put together all four phases of the game at once—hitting, pitching, baserunning and defense. He considered their pitching performance decent but thought that the other three pieces needed some more consistency to win.

Perhaps one of the contributing factors to that was the familiarity each team had with one another. Schmitz noted that Pompano came out ready to play because of the rivalry and that his team may have taken their opposition a bit too lightly.

“I didn’t like the way our guys played against kids they knew,” said Schmitz. “I knew that coming in the game and I talked to them before the game. I know there’s a feeling of ‘oh, we know them,’ but do not take it like this. It’s baseball. On any given day someone can beat you. I didn’t like the atmosphere coming into the game, but, as I said, it’s early in the season and we’ll learn from it.”