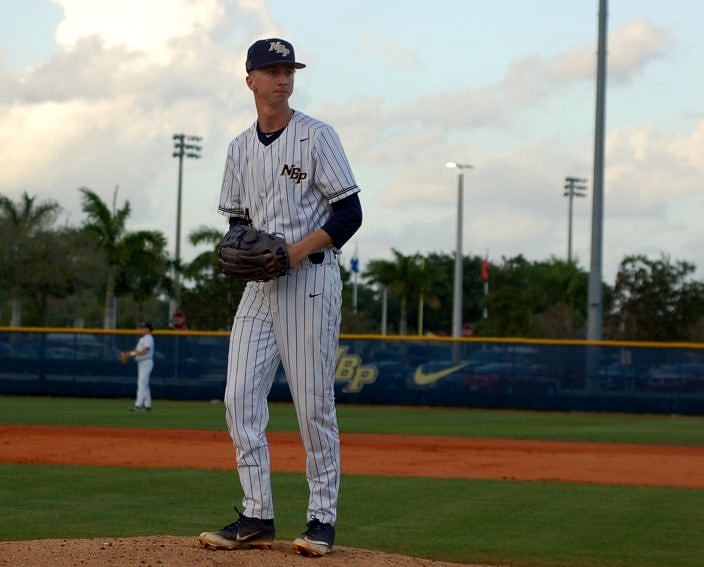 Dusty Snyder started the game on the mound for North Broward Prep.

For the second straight year, the North Broward Prep Eagles beat the Calvary Christian Eagles in a low-scoring, tightly-contested game. In 2019, Zac Schultz started the game for North Broward and Rusty Snyder closed it out. This Tuesday, Snyder got the start and Schultz returned the favor by shutting the door with a dramatic, bases-loaded strikeout on a full count to cement a 3-1 victory.

“I thought it was a well-played game by both teams,” said North Broward Manager Brian Campbell. “It was pretty clean defensively and we just got a couple breaks here and there, and that was the difference in the game. I thought our guys were really good on the mound, and they gave us a chance to win the game.”

Snyder pitched six innings of scoreless baseball and allowed just three hits. He finished the day with six strikeouts, but he got the Calvary hitters to fly out nine times before exiting the game. A self-described pitch-to-contact hitter, Snyder knew that the game would be a close one and that he’d have to trust his defense to make plays.

“Every time we’ve played Calvary in my four years here, it’s always been one-run, two-run or three-run games,” said Snyder. “It’s always been close. Tensions have always been high. It’s a big rivalry here and I hope it keeps going.” 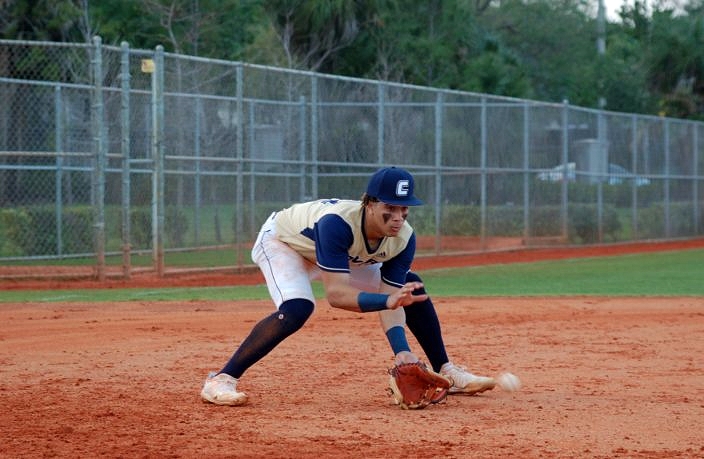 Before coming in to pitch, Schultz played a crucial role in his team’s offense. After driving home the first run of the night on a groundout to the right side, Schultz drove shortstop Kobe Benson in for the second time with a two-out double.

“I think that first inning was huge for this game,” said Schultz. “Kobe getting on base with that double set the tone, and it was really big when he got over to third with the passed ball. And the fact that I got him in was really big for our confidence as a team. Playing defense with lead is way easier, and you feel like you want the ball.”

Schultz’s fifth-inning RBI-double looked to be routine flyball for Calvary center fielder Ty Hollandsworth, but he lost in the clouds. Hollandsworth made up for shortly after with an outfield assist at the plate, catching Schultz and holding it to a three-run game.

“Usually my velocity comes from my anger,” said Hollandsworth. “Last game we played Calvary Clearwater and I mis-threw one to home, so I knew I had to make a precise throw to home plate. It went a little high, but I got him in time.”

All three of the players who scored for North Broward on Tuesday advanced on the basepaths on an error, passed ball or wild pitch. Manager Gil Morales said that his team was still adjusting to his system and that communication was something they needed to work on after missed signs and poor approaches hurt them.

“We don’t have a schedule that’s going to allow us to make mistakes,” said Calvary manager Gil Morales. “We don’t have a veteran team like a lot of people think. We’ve got a lot of young guys in positions that they’ve never played at the varsity level, and it’s not going to get any easier. I came down here to play the best competition we can. We have some adjustments to make, and once we figure that out, I think that this is going to be a pretty good ball club.” 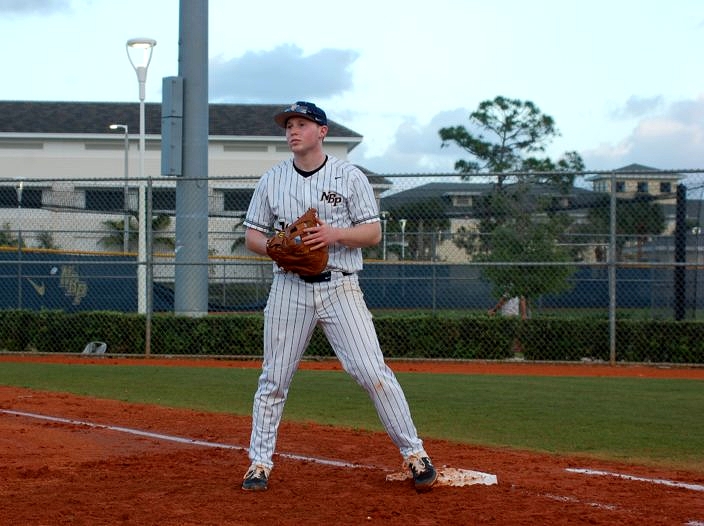 Zac Schultz started at first base Tuesday night and finished the game on the mound for North Broward Prep.

Designated Hitter Erik Blair left the game during an at-bat in the sixth inning after injuring his hip. Blair was helped off the field and sophomore Abe Rozenblum finished the at-bat by drawing a walk. After the game, Morales said that if Blair misses anytime, the team has enough depth on offense to weather the storm of being without their No. 3 batter.

Moving forward, both teams have several tough games ahead of them. Morales said his team is close to playing the kind of baseball that they want and that he expects their record to improve soon. After three straight wins, Campbell said North Broward is looking to keep things going.

“Our schedule has been really tough,” said Campbell. “Our kids are battle-tested. Every win we have is hard-earned, and every loss has been pretty close. We’re growing as a team and figuring it out, so hopefully, we keep going the right way and keep having fun.”