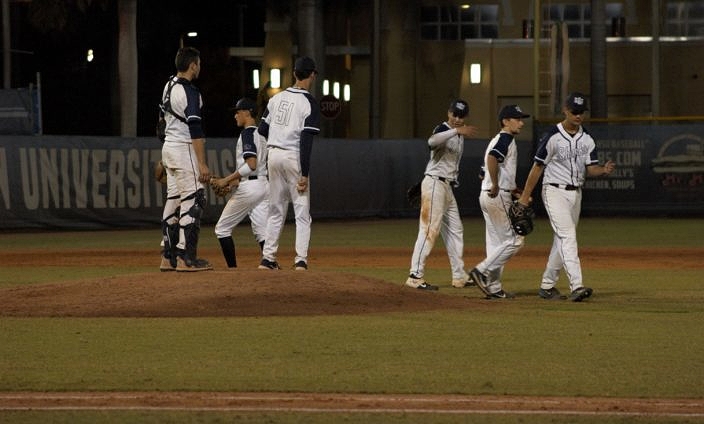 Sharks starting pitcher Jake Kustin and his team after a meeting on the mound.

The University Sharks (4-2) proved on Tuesday night that one big inning is all you need to win against a tough opponent. The Sharks defeated Chaminade-Madonna 5-0 in the HSBN Broward Game of the Week, a game that stayed scoreless until the bottom of the sixth.

“It was a great high school game,” said Sharks Manager Paul Herfurth. “The score is not indicative of how good it was. Their pitchers did an outstanding job. Their starter, Frankie Belissi, is a real competitor and did a fantastic job. My two guys did great—Jake Kustin pitched really, really well and I’ve got an outstanding closer that you saw there at the end.”

Kustin started the game for the Sharks and held the Chaminade Lions scoreless through six innings behind eight strikeouts. He came back out for the seventh, but he was relieved after the first two men reached without an out. Third baseman Grant Siegel relieved Kustin and retired the only three batters he faced—two via strikeout.

“It’s still early in the year,” said Herfurth. “That’s the most [Kustin’s] thrown all year, so I wanted to be careful. He was disappointed, obviously, but that’s what I expect. I want him to be disappointed because I want him to want to finish. At the end of the day, there’s no use risking injury when we have a closer like that. Jake’s our guy. We expect him to perform well in a big game and he didn’t let me down.”

After throwing a complete game his last time out, Kustin wanted a repeat performance. As he neared the 90-pitch mark, he took a chance by throwing a changeup with a full count. It didn’t work out, but that’s about the only thing that didn’t work for him on Tuesday.

“I noticed throughout the first at-bats [Chaminade] had that they liked to move up in the strike zone,” said Kustin. “That means they’re more confident with the lack of velocity, so I just had to keep hitting them with fastballs. And then guys like Fiori on their team like the fastball, so I moved off-speed so I could keep it low in the zone and minimize damage.” 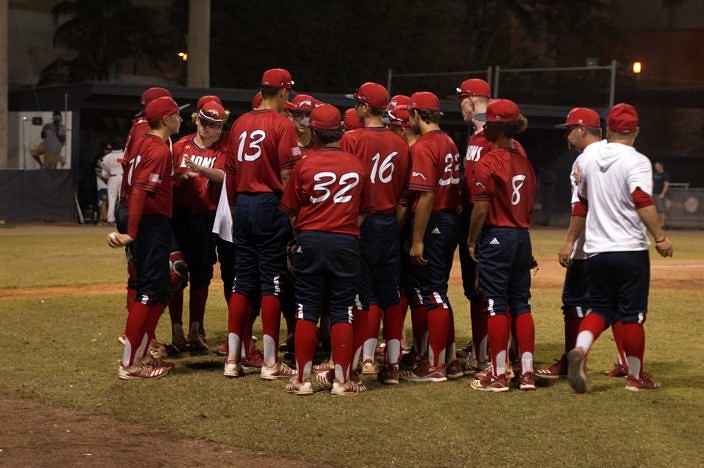 The Chaminade Lions in a huddle after surrendering five runs late in the game.

The Lions pitched a strong game too. Starting Pitcher Frank Billisi got through four unscathed innings before handing the ball over to Frank Villella, who came in from right field. Although four of the five runs University scored came against Villella, only one was earned.

“We got a good start out of Belissi,” said Lions Manager Dan Scott. “He got us out of a few jams and Villella did the same thing. Five errors are going to kill you every time. We have to put a zero in the error column.”

Villella got through a tense fifth inning with a bases-loaded strikeout against Saul Bendayan, who had already doubled to center earlier in the night. In the sixth, a shallow pop-fly to right field off the bat of University’s Matthew Manuel settled in for a base hit, scoring the first two runs of the game.

Villella returned to right field before the sixth ended, but he closed the inning with a diving catch that stopped the bleeding for his team. 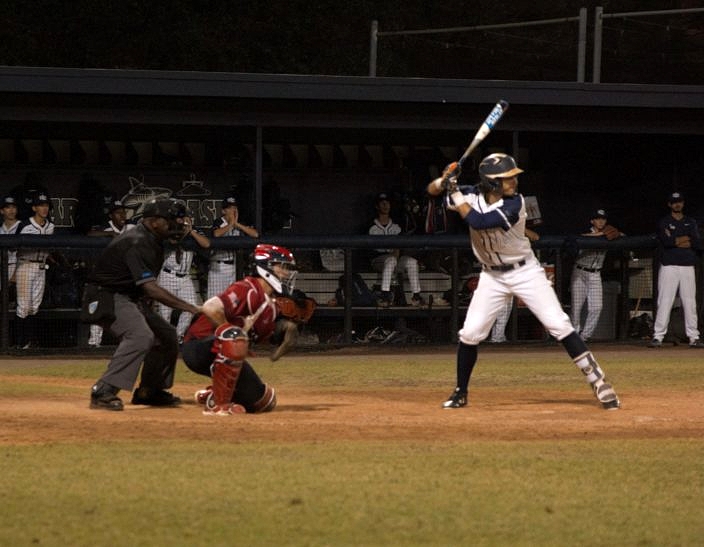 Saul Bendayan in the batter’s box for the Sharks.

Both managers stressed the importance of a good approach at the plate after the game. Scott said that his club would be focusing on shortening up the “big swings” he saw his team take Tuesday, and Herfurth praised his team for keeping their head down on a night where their typically strong offense was “shut down” by the opposition.

“We knew Chaminade was going to be really good,” said Herfurth. “Danny Scott was my former assistant when I was the head coach there, and he does an outstanding job. He’s got a good team, and there really isn’t a bad team in this district. Games like this—we got shut down and scored two runs on a bloop single. That’s why I love it. That’s why it’s the best game in the world.”