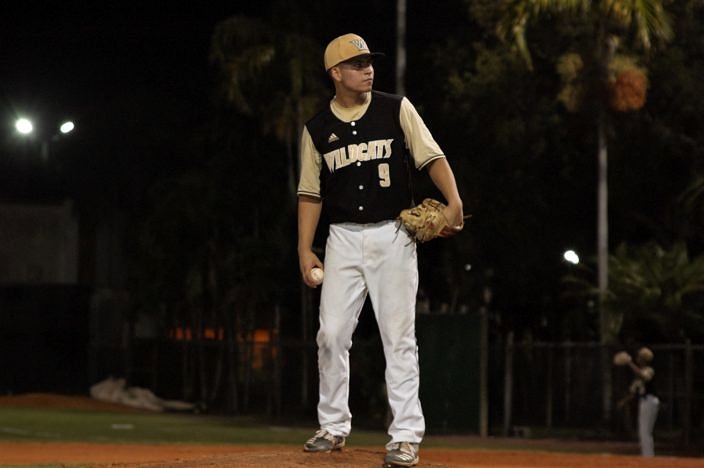 Nick Pineda takes the mound for the Western Wildcats against the Goleman Gators.

The Western Wildcats improved to 6-1 Wednesday night with a 4-1 victory over the Goleman Gators (3-2-1). Pitching was the story of the night for both clubs, but it was Western’s dynamic duo that prevailed.

Senior Nick Pineda got his first victory of 2020 after throwing six scoreless innings and hurling nine strikeouts. Nolan Braun came in to close the game and struck out the side after giving up a leadoff hit.

“They’ve been a great 1-2 punch here,” said Wildcats manager Onel Garcia. “We’re pretty beat, but our pitching is probably the best thing about the team right now, you know?”

Braun and Pineda met as sophomores on the team. Quickly, a friendship formed and that relationship seems to have created a strong sense of trust between the two pitchers. Braun joked that Pineda starting a game forces him to finish it off just as strong. By the sound of it, Pineda doesn’t mind having Braun there to back him up, either.

“I love having that guy behind me,” said Pineda. “I know he’s going to come in behind me and shut the door. We’re good buddies and I’m just glad to have him behind me.” 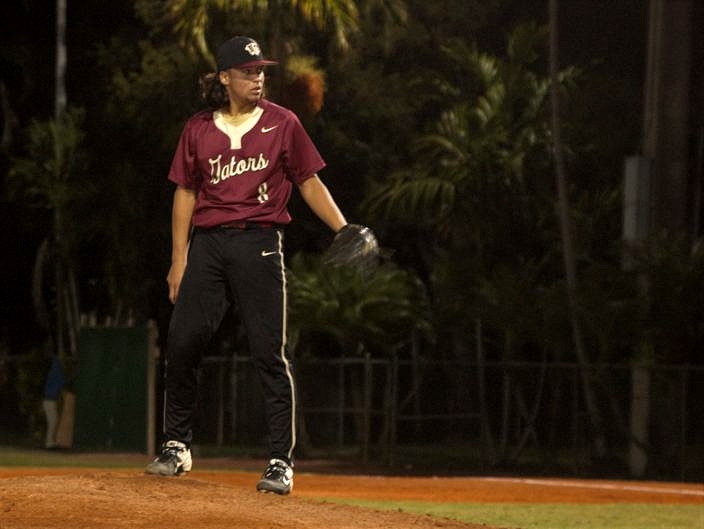 However, Pineda wasn’t the only starting pitcher to retire nine batters via strikeout on Wednesday. Brandon Olivera, a 14-year-old freshman for Goleman, matched the performance in just under five innings of work. Olivera earned the loss, but Gators manager Jose Lopez wasn’t let down by his young star.

“It’s early in our season and this is the most he’s thrown,” said Lopez. “I’m not trying to bring him to 90-100 pitches, and I think it was good enough. He struck out a lot of guys, so it was just a decision based on the number of pitches he’s thrown since the start of our season. He’s going to be a great one, I can assure you of that.”

Of course, Olivera wanted to keep the pitchers duel going when he took the mound in the fifth. The Gators had just scored the first run of the night, and he was in line for the victory. Olivera gave up a single to start the inning and soon four runs crossed the plate. Three of those were charged to Olivera before he came out.

“I was just trying to keep doing my thing and throw strikes,” said Olivera. “I was trying to get a ground ball for a double play or something to get me out of the inning, but they hit the ball good that inning and got a couple of runs across.” 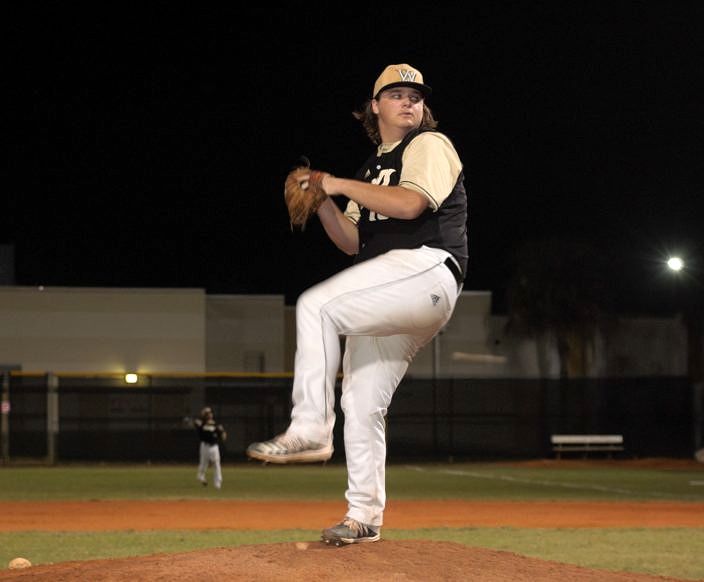 Nolan Braun strikes out three to secure a Wildcats victory.

In a game where pitching dominated, small adjustments made all the difference. The Wildcats have practiced with machines throwing 100-mph pitches, making it easier to make those adjustments after getting a feel for Olivera’s stuff.

“Olivera—that kid is really good,” said Wildcats manager Onel Garcia. “He’s not your typical freshman. He was blowing us down, but we hung in there and figure it out a little bit. We got a baserunner there and some good at-bats in the fifth inning.”

“One of our main things this year is to have a good strikeout rate,” said Garcia. “To keep it under 20 percent, we try and put the ball in play. We’ve been doing that until today, and that’s one of the things about high school baseball. One day you face a guy who’s throwing 78 mph and the next day you face a guy throwing 90 mph. It can make you come out a little flat.”

After the scoring in the fifth, neither team was able to add more runs before the final out. The loss, while disappointing, isn’t the end for the Gators. Lopez is getting his team ready for a big game against an undefeated Hialeah Gardens (6-0) team next Wednesday, and the tone is positive.

“I have a team right now that has a lot of good pitchers, but we’re still trying to find our identity at the plate,” said Gators manager Jose Lopez. “If you take a look at my roster and starting lineup, I only have one senior on the field. And that’s a big accomplishment. We’re battling every team and the kids are starting to buy in. It’s still early in the season, and we still have a winning record.”