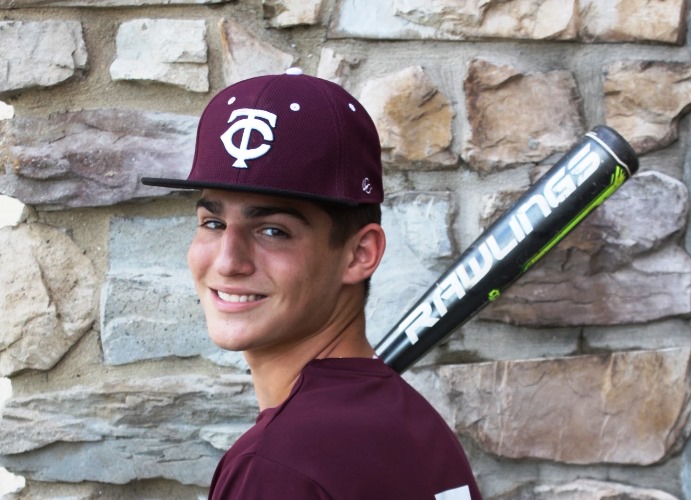 Tanner Martinez, #8, from the Trinity Christian Warriors, is a catcher/outfielder that graduates with the class of 2020. Tanner, like many seniors, had to deal with the emotions when his season was cut short. He gave us some insight into his greatest baseball achievement.

Baseball has always been a hug part of my life. I fell in love with the game from a young age and haven’t looked back. Not only do I enjoy the game but I enjoy the work I have to put into it.

I have always had a talent for the game but the working hard had to be learned. My achievement story is about making my first travel team. To most this probably seems small and unimportant, but it is probably my greatest achievements up to this point. As it taught me some valuable lessons that I apply to my life today.

When I was seven years old I tried out for a travel team out of Boynton Beach called the Indians and made it. When I made the team I was filled with joy and excitement. But to understand the full extent of this joy and why I was so happy I have to start from the beginning.

As a young player in recreation ball, I was always a stand out player, the game came easy to me and I was better then most of my peers. People soon recognized this and I was invited to try out for the Vipers.

The try out was at night and they started by grouping us up, and sending us to the outfield where we were hit fly balls. We then grouped up in the infield, then hit. I had done very well at the tryout and had a good feeling about making the team.

A week later my parents received a email from the Vipers. They sat me down and opened it and in the email it explained how I had not made the team. I was devastated by the news, it was the first time a team hadn’t wanted me and I couldn’t figure out why.

I had questioned myself and the team, was I not good enough?, Were they even paying attention to me?

Later that year my parents got news that I was invited to another tryout for the Vipers. I decided to make this one different and prepare for it. I worked with my dad everyday until tryout day came. Around the time of the tryout was Christmas and for Christmas my parents bought me my first big barrel bat. I was very excited about this and worked with it for a week to get used to it before my tryout.

The tryout was during the day and was structured the same way as the previous one had been. All I could think about during the tryout was using my big barrel bat to hit and because of this my performance suffered. Later that week my parents received a email that said I didn’t make the team. Again I was devastated as I had worked hard for this tryout and it seemed as if my hard work was for nothing.

This however didn’t stop me from continuing to work, not making the team for the second time was exactly the fuel I needed to better my game. Soon people started to take notice of this and another local team called the Indians contacted my parents and wanted me to come for a private tryout.

During this tryout I practiced with the team and had a very good performance. The coaches told my parents that they would discuss it and give us an answer the next day. I was anxious and couldn’t wait for the next day to come.

Finally it did and the coach called my parents and told them that I had made the team. When my parents told me I was filled with joy and excitement to get started. I ended up playing a couple tournaments this with them, where I performed very well, so well that the Vipers started to take notice.

They contacted my parents and told me that they wanted me to play some tournaments with them. When I got the news I was very happy and saw just what hard work can do.

My failure to make the Vipers motivated me and taught me some lessons that I can not only use in baseball, but in life as well. It showed that anything worthwhile doesn’t come easy and that if I really wanted something I’d have to prepare and work for it.

It showed that there is a process to the end goal and that there is no short cutting this process. It also taught me how to deal with adversity, as in life nothing comes easy. It taught me to bear down and get through, rather than coward away and quit.

Without my failure, these valuable lessons may have never been learned, so I am thankful for them and this is why making my first travel team is my greatest achievement.