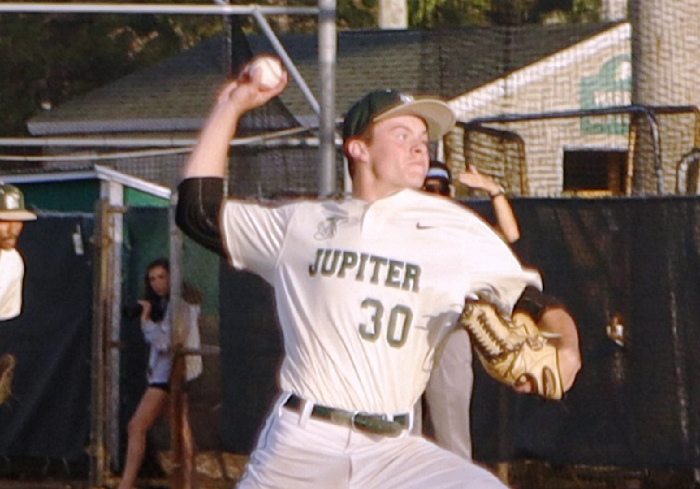 Chase was hitting near .300, with an ERA under .50 when his season was cut short.

Chase Senecal, #30, from the Jupiter Warriors, is a pitcher/outfielder that graduates with the class of 2020. Chase was hitting near .300, with an ERA under .50 when his season was cut short. He gave us some insight into what the past few months have meant to him.

My name is Chase Senecal. I am a senior at Jupiter High School in Palm Beach County. Baseball has been my life. I have played the game ever since I could pick up the ball. My father, grandfather and I all used to play whiffle ball whenever we would get the chance at family gatherings and holidays.

Baseball has been a part of my life for as long as I can remember. In middle school I never made the middle school team and was down on myself. Going into my freshman year my spirits were down and I had a lot to prove but I never lost that same love I had as a kid playing whiffle ball in my grandfather’s yard.

Coach Mook saw during the tryout that I had the ability to control the baseball and decided to give me a shot that fall. It was one of the happiest moments of my life up to that point. But I still had a lot to prove. The game that I showed that I was capable was one of the last games of the fall vs Dwyer Varsity.

The coach decided to give me the start because I had proven that I can control my pitches and throw strikes. I had butterflies because I was nervous. As a freshman on JV in the fall I was going up against Dwyer Varsity who was older and more experienced than I was. I calmed myself down by chatting and cracking jokes with my new friends who I had met thanks to baseball.

I ended up throwing a three inning shutout and gave up one run in the 4th inning before being pulled. It was the first time I had proven to myself that I can be better. I had met new friends thanks to baseball who have become like brothers to me.

We all pushed each other to get better and made each other better people in the process. Baseball has also allowed me to become a leader on and off the field. One of my friends asked me to be a part of a club called Student Aces which has changed my life.

Student Aces focus on student athletes who want to be a leader on the field and in the community, and they achieve this by putting us in situations we would have never thought we would be in through volunteering and group activities.

For example they have a kick ball game called Heros vs Hotshots at Roger Dean Stadium. They put me in charge of making sure all the other volunteers are doing what they were supposed to be doing. It has allowed me to become a better leader on the field.

The last game before the season was cancelled I was challenged with the start against Wellington, which had been on a hot winning streak. My father was an All-County pitcher there in high school. My entire family, aunts, uncles, grandparents, and cousins were there at the game. Going in, my ERA was under one and I knew this could be my last game in high school.

I pitched a six inning shutout. I know that night my team, coaches, and family helped me through. I wanted more. I wanted to continue to prove myself senior year by facing more high level competition.

However, the virus has ended that dream. Now I am looking forward because forward is where we need to go. I am very fortunate to be continuing playing ball at Pfeiffer University in North Carolina. I will continue to grind, continue to work, continue to dream, but I will ALWAYS be Warrior. Best wishes to all the Seniors. Stay Well!