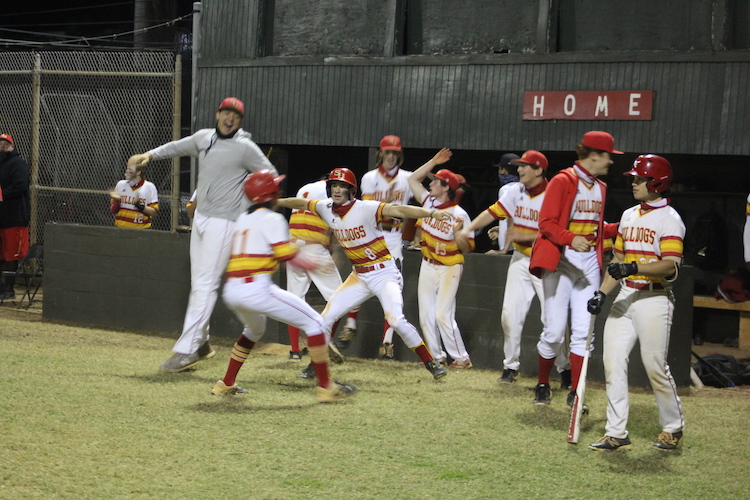 South Broward players celebrate following Tyler Ochs’ two-RBI single in the last of the sixth that gave them a 2-1 lead.

He may be the No. 8 hitter in the lineup but that meant little to South Broward second baseman Tyler Ochs.

When the clutch moment arrived for him on Tuesday night, he may as well have been the team’s number one hitter.

That’s because, with the Bulldogs and starting pitcher Jacob Laroque trailing 1-0 and having been frustrated all night long, Ochs stepped up in the last of the sixth with runners on second and third and poked a 2-RBI base hit to right field through a drawn-in infield to put his team in the lead.

And that’s all Laroque needed. Pumped up from being given the lead, the senior pitcher charged out to the mound in the top of the seventh and struck out the side in order, giving the Bulldogs a 2-1 victory over Fort Lauderdale at South Broward High School.

“I was late on the ball the first few pitches so I just shortened up my swing with two strikes and tried to put something in play,” said Ochs. “I knew the infield was in so I was just trying to get the bat on the ball and see if I could just poke something out there. I got a fast ball over the middle and found a hole. What a great feeling because Jacob had pitched so well all night and deserved to win this one.”

Laroque was brilliant from start to finish, completing his masterpiece effort with 12 strikeouts against just one walk and gave up just two hits as South Broward improved to 3-4 on the season.

“What I’ve been telling our guys the entire season and I was telling them again tonight is that it doesn’t matter what you’ve already done, it’s staying focused on what’s in front of you and what you are going to do the next time,” said Laroque. “No matter what happens or what goes wrong, you worry about what’s next. Just keep grinding and that’s what I did. It’s what you do in the moment when you need to that matters.”

An error that led to an unearned Fort Lauderdale run in the second inning, didn’t seem terribly significant at the time. But as the game wore on and Flying L’s pitcher Gavin Gonzalez, who was outstanding himself on the mound striking out seven and working his way out of two jams, kept putting up goose eggs on the scoreboard. It appeared that 1-0 lead just might hold up.

But then came the bottom of the sixth when Gonzalez struck out Alex Lopez to lead off the inning. But the third strike was in the dirt and went back to the fence as Lopez hustled down to first. 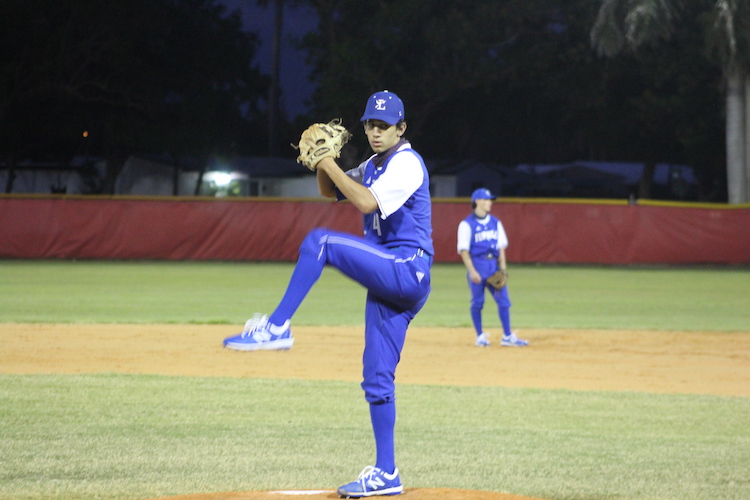 Fort Lauderdale pitcher Gavin Gonzalez was outstanding as well on Tuesday night as he struck out eight batters in a complete game effort.

When Laroque laid a sacrifice bunt down the first base line, Gonzalez and first baseman Cole Shefferman converged on the ball but nobody was covering first base and everyone was safe.

Anson Graumann then came up and dropped another bunt down to advance the runners to second and third setting the stage for Ochs’ heroics.

“Jacob is a four-year starter, a great competitor and brings pure positive energy for this team,” said South Broward Manager Darin Koch. “You never see any negativism from him whatsoever and he just gets after it. There is no fear and he’s one of the most natural leaders I’ve ever had and it paid off tonight. He kept grinding and keeping us in the game and then Tyler did a nice job of getting short on the bat and poking one past the infield.”

The Flying L’s plated their second inning unearned run when, with two outs and Jack McCoy on second, Shefferman bounced a slow ground ball to the right of first baseman Dominic Martinez. Martinez fielded it cleanly and tossed it to Laroque who was hustling over to cover first but couldn’t handle the ball which then bounced away allowing McCoy to round third and come home.

“That was on me,” said Laroque. “I had to make that play but didn’t. But like I said, you can’t dwell on anything that has already happened and I just had to get back on the mound and keep working, looking forward and hoping good things would happen which they did.”

Laroque suffered through more frustration in the last of the fourth when, after doubling to right center, reached third base with only one out.

It was here that Ochs stepped up and laid down a bunt on a safety squeeze play. The ball went high but Gonzalez made a great defensive play, grabbing the ball and firing quickly to catcher Alex Kareyva at the plate to cut down Laroque trying to score and keeping the Bulldogs in that 1-0 hole. 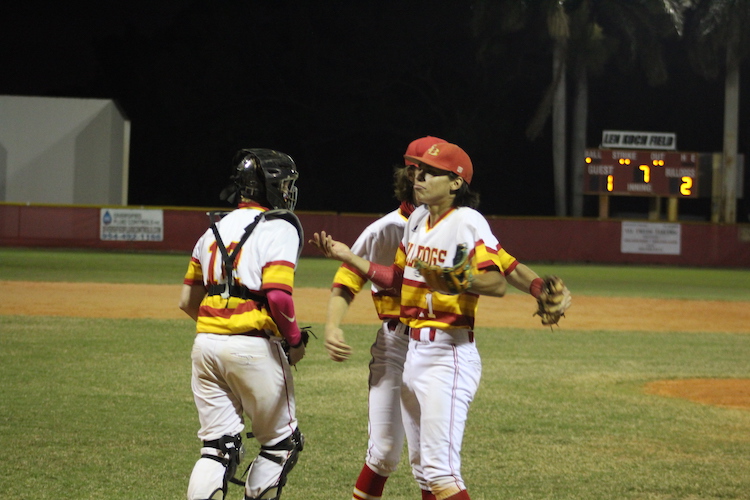 South Broward pitcher Jacob Laroque is congratulated by his catcher Anson Graumann after recorded the final out of an outstanding 2-hit, 12 strikeout performance against Fort Lauderdale.

More frustration in the last of the fifth for the Bulldogs when Luke Valenchis was on third with two outs. Martinez then ripped a rope to left center field that appeared to be headed to the gap. But Brennan, playing left field, managed to run it down, stretching his glove out to spear the ball and end the inning.

“Both pitchers were outstanding tonight which makes it sad that somebody had to lose it and unfortunately it was Gavin on our side,” said Fort Lauderdale Manager Terry Portice. “We just didn’t get him enough offensive support but of course South Broward’s pitcher had a lot to do with that as well. It’s not always the best feeling but I’m proud of our kids, they really battled tonight.”

Despite Tuesday night’s setback, Portice is optimistic and looking forward to the rest of the season and, after last year, glad that there even “is” a season.

“I’m excited at what’s ahead,” said Portice. “Defensively we showed real well tonight, our pitching staff led by Gavin is solid so we just got to get the sticks rolling. But hey, we’re just glad we’re even having a season right now because as we all know, last year we didn’t really have one so it just feels great to be out here playing baseball.”