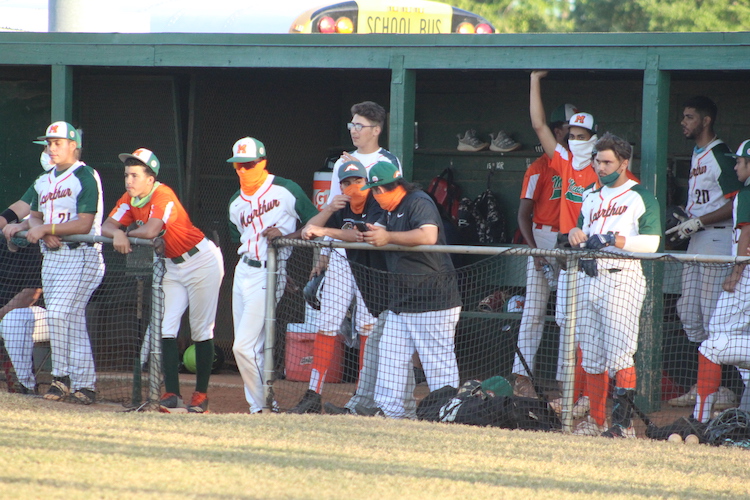 Just two years removed from a magical and historical run to the state final four and following 2020’s “non-season” due to the COVID-19 shutdown, McArthur manager Oddibe McDowell never could have envisioned a 2-7 start to the 2021 season for his Mustang team.

But that’s exactly the hand of cards that had been dealt the Mustangs during the first five weeks of the season.

And it’s why Tuesday night’s contest against an equally struggling Piper team was important as McArthur, desperately seeking some momentum in hopes of getting that 2019 mojo back, needed a win to try and start getting things turned around.

While it was hardly a thing of beauty, the Mustangs, after spotting Piper three runs in the top of the first, gradually fought back and eventually emerged with a 9-4 victory at McArthur High School in Hollywood.

“Nothing pretty about tonight,” said McDowell. “But when you only have two wins in your first nine games, you’ve got to take what they give to you and do what you can to win games and tonight we got one.”

The Bengals started strongly, thanks to a big first inning in which they scored three runs, with RBI singles from Eimir Perez and Spencer Lichstraw and a sacrifice fly RBI from Dylan Howell.

The Bengals took that 3-2 lead into the fourth inning.

That’s when McArthur, after having left eight runners on base over the course of the first three innings, including the bases loaded in the first and third, finally wrestled the lead away from Piper.

After catcher Joe Perez led off the inning with a bunt single and Miguel Baez was hit by a pitch, third baseman Andy Santana stepped up and ripped a shot towards the left center field gap. Piper left fielder Traves Knowles stretched out for the ball but just barely missed it as both runners scored and Santana wound up at third with a triple.

“Those first three innings were frustrating and before that fourth inning, we huddled up and said that we needed to execute,” said Santana. “My first two at-bats I had gotten a little bit jammed, I split the gap on the second one but the center fielder got to it so this time I was just trying to get the barrel to the ball, get out in front of it and hit it hard. I guess I was in the right spot at the right time.”

Meanwhile, after his rocky first inning Guzman settled down. Starting with the final out of the first, he retired 15 of the next 17 batters before hitting a small speed bump in the sixth.

With a 6-3 lead, Guzman gave up back-to-back two out singles by Lichstraw and Rafael Reyes putting runners on the corner. When a throw down to third by the catcher attempting to pick him off at third went into left field, Lichstraw trotted home to make it 6-4. There was no panic by Guzman as he quickly struck out Knowles on the next pitch to end the threat. 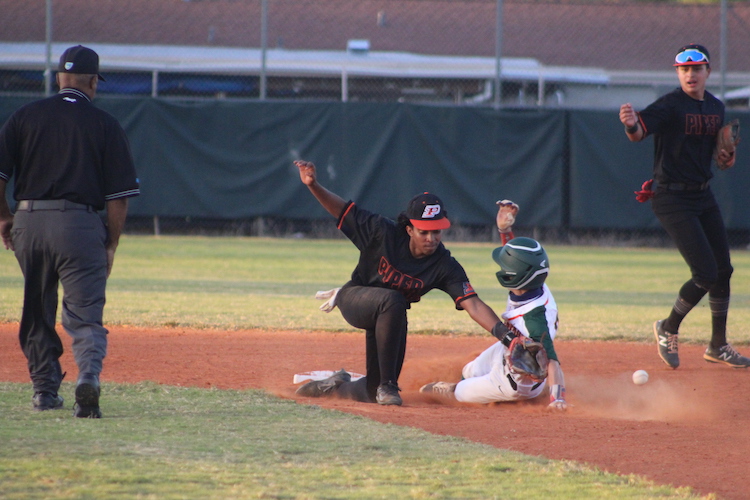 After the Mustangs plated three more runs in the last of the sixth, Guzman enjoyed a five run lead as he walked out to the mound in the seventh. He finished things off by retiring the side in order as he scattered seven hits, struck out eight and walked just one in the complete game effort.

“After that first inning, it was just a matter of trying to settle down, get in a rhythm and start hitting my spots and that’s what I managed to do,” said Guzman. “Everything just flowed from there. Once we got the lead in the fourth, I knew we’d be okay.”

What has not been okay for Perez and a few other seniors on this Mustangs team has been the slow start to their season. Perez was the starting catcher as a sophomore two seasons ago in that state semifinal game in Fort Myers.

Even though the Mustangs dropped an 8-0 decision to eventual state champion Plant City, the feeling was that theirs was a program that was ready to take off with years of success. Only to get the plug pulled on any momentum by the COVID shutdown a year ago.

“Two years ago was really amazing and then we came out last year ready to try and do it again and then as we all know, coronavirus shut everything down and just like that it was over,” said Perez. “No practice, no reps, no nothing and it pretty much cut into any momentum that we had going. Things have really been a struggle out here so far this season. I didn’t ever thing we’d be out of the gate 2-7 but here we were. But those nine games were behind us and tonight it was all about just trying to get a W and trying to see if we can start getting some of that momentum back and get that magic back we had from two years ago.”

McDowell, who played 10 seasons in the majors from 1985-94 for the Texas Rangers, Cleveland Indians and Atlanta Braves, concurred that, after arriving a few years back to build this program, last year’s plug-pulling curbed the momentum of a state final four appearance.

“It’s a crazy thing, you look back a year ago with everything getting shut down. You were so excited for your seniors and just like that, bam, it’s gone and I’d be lying if I said it didn’t deflate you a little bit to say the least.” said McDowell. “ Now it’s a matter of trying to get the kids back in the right mindset going about the game instead of going through a routine. We’re working on trying to build things back up again. We’ve gotten off to a disappointing start but I know we’ve got plenty of talent here so let’s see where we go from here.” 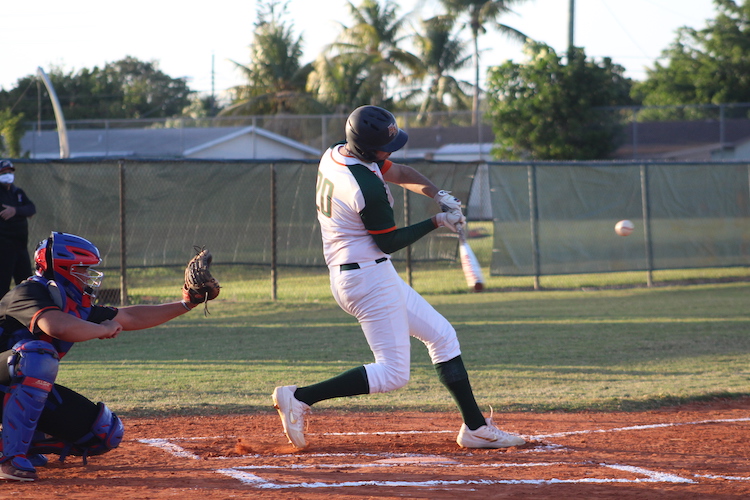 As disappointed as Piper Manager Zach Crosno was over his team’s performance, he was just happy his team was even able to play a game.

With six of their games having been postponed due to COVID-19 quarantine protocols issues, Tuesday night represented just the fourth game this year for the Bengals who fell to 1-3.

“This year has been really difficult and I just feel so bad for our kids,” said Crosno. “Never knowing whether you’re going to play or not, it just doesn’t allow you to get into any kind of rhythm going. This has pretty much taken away half of their season so far so at least tonight we actually got to go out there and play so that in itself was a plus despite our struggles. We’ll just get back out on the field and keep plugging away.”