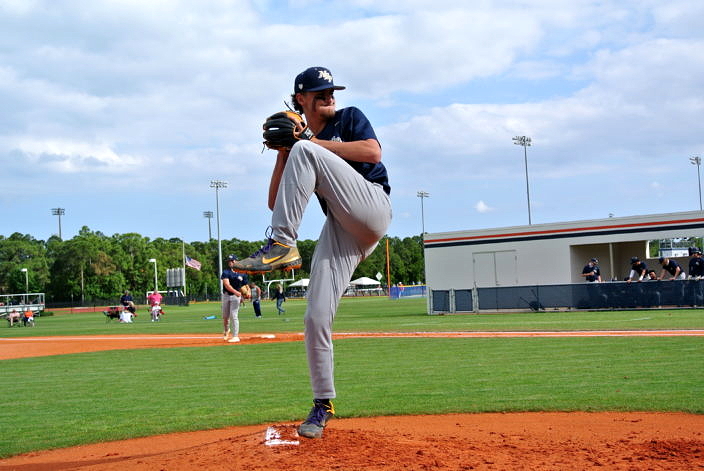 A Tuesday afternoon tilt between the North Broward Prep Eagles (7-6-1) and the Benjamin Buccaneers (5-8) took place at Jacob’s Field in Palm Beach Gardens. The Benjamin faithful were a gracious host to the caravan of Eagles fans who made the lengthy drive north from Broward County. Fans were treated to a tight contest for the first half of action. The Eagles were ahead 4-2 through four innings, but pulled away in the fifth when they hit around the order, closing out the 10-3 victory.

The Eagles pitching limited opportunities for the Buccaneers offense and the Eagles defense clamped down in tough moments. North Broward Prep Manager Brian Campbell offered his appraisal of the game.

“We normally rely on pitching and defense. Today we were able to put the bat on the ball and executed some situational hitting. Top to bottom it was a clean, well played game.” said Campbell, after the Eagles climbed over .500 on the season with the road win.

However, the Buccaneers tipped the game their way early. Junior starting pitcher, Freddy Beruvides held the Eagles hitless for the first two innings which kept the score tied at zero. The Eagles briefly took the lead after scoring in the top half of the third to go up 1-0. But the Buccaneers quickly regrouped in the bottom half and reclaimed the lead with back to back RBI doubles by underclassmen Ethan Pribramsky and Walker Buchanan. 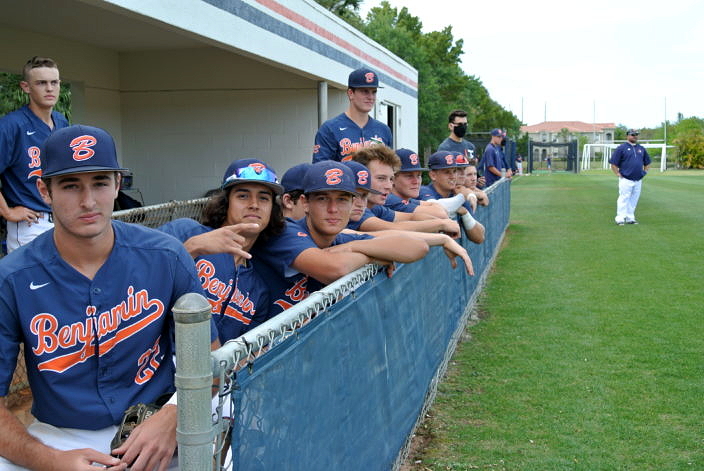 The Benjamin Buccaneers celebrate a two-run third inning that reclaimed the lead against North Broward Prep.

Beruvides would exit in the fourth inning with a high pitch count. The Eagles lineup then got to the Bucs bullpen. The Eagles would score three runs in the fourth to take the lead 4-2. The next inning, the Eagles hit through their lineup, scoring five runs and putting the game out of reach at 10-2. Benjamin never quit but only managed to score once more while stranding nine baserunners to put the final score at 10-3.

“Normally the team that takes the early momentum plays with more confidence, but lately that hasn’t been the case with us.” said Lynch after the Buccaneers dropped their third game in four tries. “We have a lot of talent. But we have to toughen up and focus to be better.” he finished.

Every hitter in the North Broward lineup safely reached base. Eagles senior shortstop Jonah Diaz led all hitters with three singles, spraying liners to all areas to drive in three runs. Diaz also flashed some leather in the first inning when he snagged a rocket blast above his head to record the final out with Benjamin runners in scoring position.

“I was just trying to help out our pitcher, Shane,” said Diaz. “Of course the hits are nice to get. But I love playing defense. I feel like if I play well in the field I’ll be rewarded with at bats.”

While stout defense certainly helped secure the win for the Eagles, their pitching was even better.

North Broward starting pitcher Shane Huntsberger was in total control for four plus innings. The senior deployed a high leg kick and strong, smooth delivery to generate incredible action on his fastball. Huntsberger worked patient and methodically through the Buccaneers lineup and increased his velocity throughout the game.

“The first time through the lineup I like to see everybody. I like to get a feel for the game. Once I get to the third and fourth inning, I really let it go and that’s when it gets fun for me,” said Huntsberger who dedicated his performance to his parents that attended the game to celebrate their anniversary together. 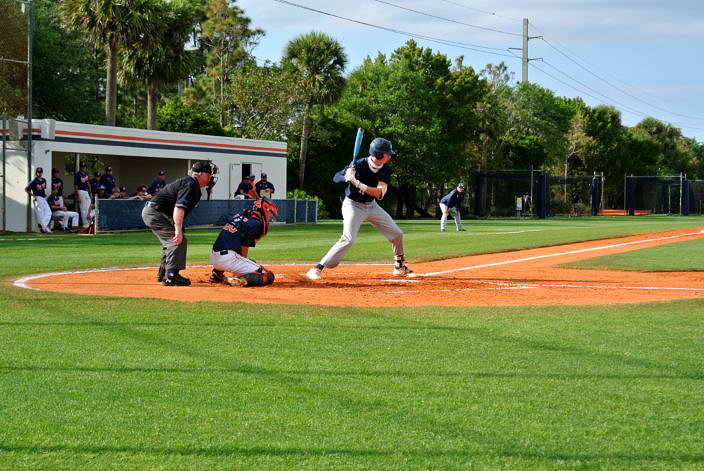 North Broward Prep hitter Yoel Tejeda takes a ball in the dirt to draw a walk late in the game.

Sophomore Jensen Secular replaced Huntsberger in the fifth when Benjamin was threatening with the bases loaded and one out. Secular notched a big strikeout to get out of the jam and kept the Buccaneer bats quiet for the remainder. Huntsberger recorded an impressive line of seven strikeouts on just 85 pitches, allowing only two runs in the winning effort.

He graciously credited his catcher, Dylan Runsdorf for the successful outing with calling a great game.

Coach Campbell was optimistic after the game.

“The guys are working hard, they’re buying in. The goal is to keep improving everyday. If we can keep pitching, playing clean defense and put it together at the plate – I like my team a lot. We’ll have a shot and that’s all you can hope for at this point.” Campbell said.

North Broward Prep (7-6-1) aims to win their third straight game on Friday 6:30PM at home against the Trinity Christian Warriors (6-2-1). The Benjamin Buccaneers hope to return to winning ways on Monday 3:30PM against Oxbridge Academy (1-5).