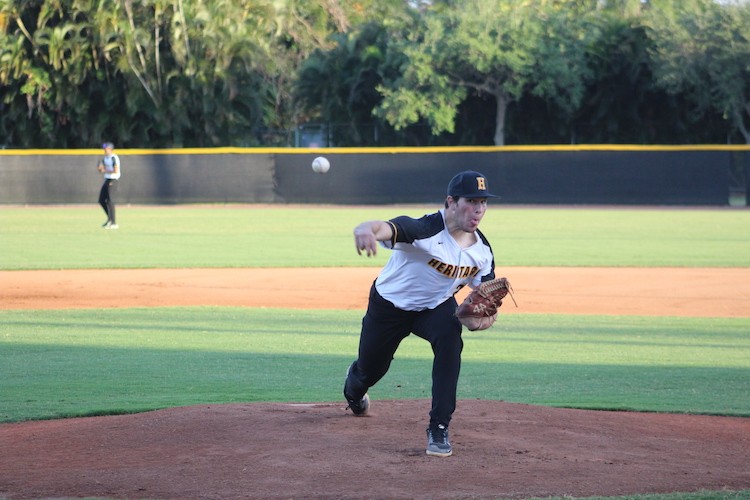 Playing their first game in nearly three weeks after a positive COVID-19 test shut things down for awhile, the Patriots of Plantation American Heritage, perhaps showing some rust from the long layoff, took advantage of a two-out error in the bottom of the second inning to score its only run of the night.

The Patriots pitching staff then took over as Brandon Gonsalves, Quinn Spalding, and Anthony Nelson came through, combining to throw a two-hit shutout as Heritage edged Chaminade-Madonna 1-0 on Tuesday night at American Heritage Field.

Gonsalves pitched four innings of no-hit ball, facing one batter over the minimum before giving way to Spalding who gave up a pair of hits including a two-out single by Jimmy Estarita in the seventh which, after Josh Agriesti had drawn a one-out walk, put the tying run in scoring position for the Lions.

But Nelson then came in and slammed the door as he pitched to just one batter, striking out pinch hitter Joey Nader on a nasty curve ball to end the game.

“I thought Brandon threw outstanding tonight,” said Heritage Manager Bruce Aven. “He worked inside/outside, had command of his slider, was able to throw his change-up several times and just did a great job out there as did Quinn and Anthony.”

Even though Gonsalves was swallowing up out after out, allowing just two baserunners who both reached on fielding errors, Aven was forced to pull him after four innings.

“Luckily we have a deep pitching staff because our guys are on strict pitch counts and that’s where the layoff really hurt us,” said Aven. “This is only our ninth game this year so as far as arms are concerned, we’re still early in the season and there’s no way we can have anybody throwing too many pitches.” 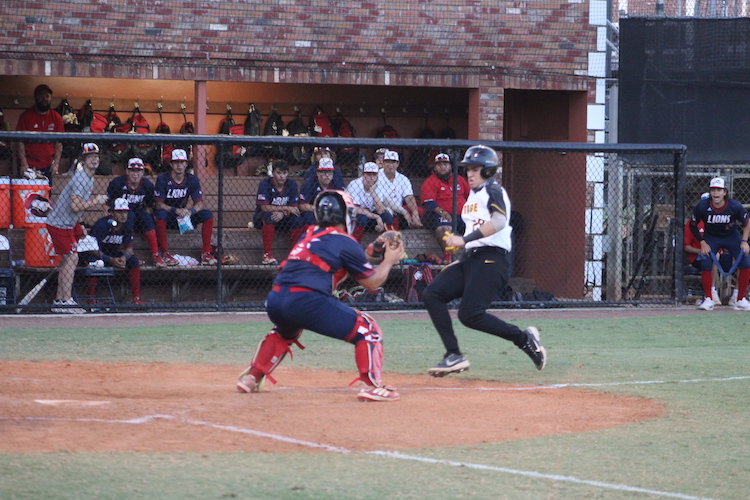 OUT AT HOME: Heritage’s Eddie Novoa is out at home as tries to score in the second inning as Chaminade catcher Josh Agriesti applies the tag.

After dropping their first three games of the season in the HSBN First Pitch Classic Invitational in February, the Patriots, ranked No. 6 in HSBN’s Broward Power Rankings, rolled to five straight wins before getting shut down following a 3-1 win over Miami Christian on March 10. Thursday’s win over Chaminade moved their record to 6-3.

“I really felt like everything was on tonight,” said Gonsalves, a UCF commit. “I managed to stay in the zone, get some ground balls and just let my infield do the work. I knew I was on a strict pitch count so wasn’t surprised at all when I didn’t go out for the fifth.”

The Patriots got Gonsalves the only run he would need in that second inning. After Eddy Novoa walked to lead off the inning, catcher Mateo Serna stepped up one out later and laced a double down the left field line into the corner. Novoa tried to score all the way from first but, thanks to a great relay, was cut down at home for the second out of the inning.

But the play at home allowed Serna to get down to third which proved important as he then scored when Danny Diaz hit a ground ball to second base which turned into an error.

The unsung hero for the Patriots on the evening might have been Serna. Not just for his double, one of only three hits the Patriots managed off Chaminade starter Daniel Lipka, but for his arm behind the plate.

When Estarita led off the fifth with an infield base hit, Chaminade manager Dan Scott, desperate to try and get a runner in scoring position, had him take off for second in an attempt to steal but Serna’s perfect throw cut him down.

One inning later, after Frank Diaz drew a one-out walk, he took off for second and it was the same result, Serna gunning him down.

While he was pleased with his pitchers and will take the win, Aven was not happy with the offensive output or lack thereof which has been a problem all season long.

“Our pitching has been outstanding and our guys have been stepping up but you can’t continue to try and ask your guys to go out there and continue to throw no hitters, one hitters, two hitters, whatever and be a successful baseball team which has been the case all season long,” said Aven. “That puts too much pressure on your defense and your pitching staff. We have to do a better job of having better quality at-bats. Obviously you’re not going to come through all the time but you have to have better at-bats than what we’ve been getting.” 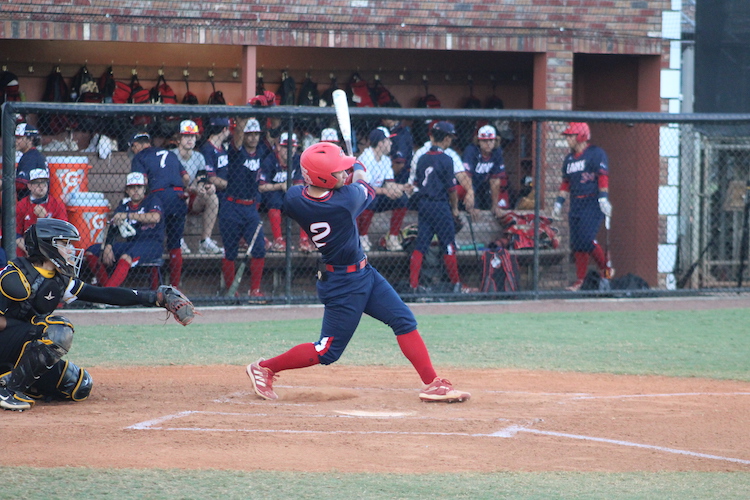 The hard luck figure of the night was Lipka. The Chaminade pitcher went the distance, giving up just three hits without giving up an earned run as the Lions fell to 4-11 on the season.

“Daniel has been doing that for us all year,” said Scott. “He’s been a staple in our starting rotation and we’re definitely going to need that down the stretch. Our guys played great defense behind him tonight, Xavier Thompson had a great night at shortstop and our outfield did a great job of tracking balls down.”

Asked what he’s trying to do to keep his team focused and positive despite the losses piling up, Scott was quick to answer.

“There’s no shame in losing to a team like Heritage 1-0 but we don’t ever take any consolation in losing,” said Scott. “We do make adjustments and do take learning experiences from it but we’re out here to be a winning ball club. We just have to learn to do the little things right. If we can do that, things will start snowballing in our direction and not the other way. Then we’ll be in a good spot.”