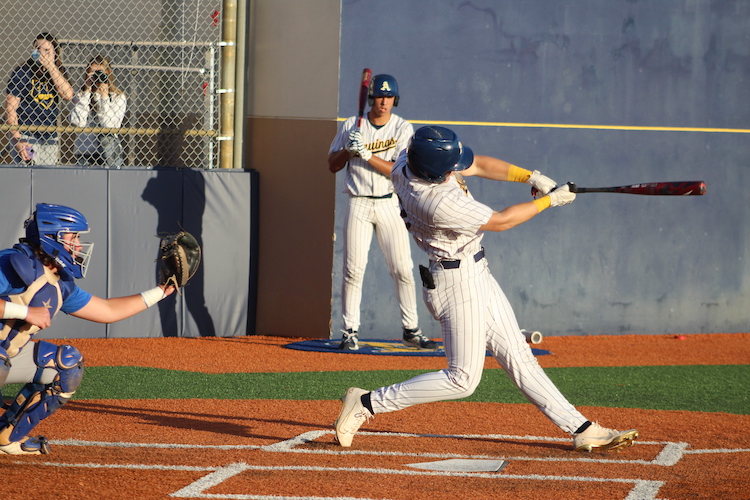 After having outscored their previous five opponents by a combined score of 51-3, there would be no lopsided wins for the St. Thomas Aquinas baseball team on Monday night.

Taking on a talented and scrappy Cypress Bay team, the Raiders, despite getting outhit 6-4, leaned on great pitching and solid defense while taking advantage of four unearned runs to scratch out a 4-1 victory over the Lightning at St. Thomas Aquinas High School.

The Raiders, ranked #3 in HSBN’s Broward Power Rankings and #16 in the state, improved to 10-1 on the season while Cypress Bay, #11 in the HSBN Broward rankings, fell to 5-2.

“That’s a quality baseball team over there and they actually outhit us tonight but fortunately the few hits we had we made them count,” said Aquinas manager Joey Wardlow while pointing over to the Cypress Bay dugout. “Pitching and solid defense is always going to win games and that’s exactly what we did tonight. We just kept playing. When you play a good team like Cypress, it helps you see what the competition is going to be like later in the year because they’re going to win a lot of games.”

Wardlow watched as his team took advantage of two huge Cypress Bay errors which allowed St. Thomas to plate two unearned runs in the first and fourth innings respectively while at the same time, handing the ball to starting pitcher Darius Robinson who turned in five innings of near dominance.

But, stacked with a deep bullpen, Wardlow went to his relievers in the sixth so Robinson didn’t come out.

“My fast ball and curve ball have been on all year long and they were on again tonight,” said Robinson who struck out three. “I’ve been able to keep batters on their toes all season with swings and misses, rollovers, weak contact and everything else. I wasn’t shocked that I came out. I’m usually on a pitch count of 60 or 70 so I just try to be as efficient as possible with my innings. It’s still early in the season so as we get deeper towards late in the season I should be able to go a little longer.”

The move almost backfired on Wardlow as lefty Alexander Llinas came in to start the sixth but immediately gave up a double by Nappi to lead off the inning before Andres Natera reached on a throwing error at shortstop (STA’s only miscue of the night) to put runners on the corners with nobody out. 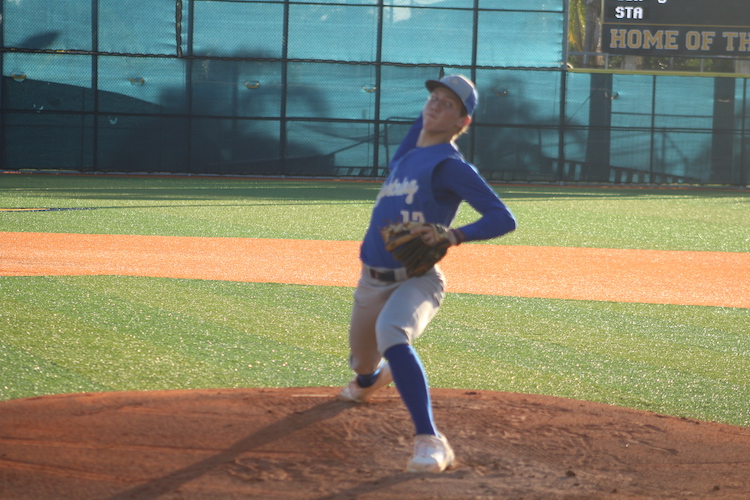 Just a freshman, Cypress Bay starter Mateo Gray turned in a strong performance, not giving up a single earned run.

After Llinas recorded a strikeout for the first out, Jesus Vanegas ripped a solid single to right scoring Nappi and Wardlow was headed to the mound to insert right hander MJ Bollinger. Bollinger proved to be “shutdown city” as he struck out two Lightning batters to end the inning before striking out two more in the seventh to record the save.

“I love it, I live for it,” said Bollinger. “I know how to stay calm for sure. The Douglas game last month (a 3-2 defeat, STA’s only loss of the season), I was a little overanxious and struggled so knew I had to stay calm this time and did what I had to do. Getting that first strikeout in the sixth was big and really got my juices going.”

“Darius is our senior guy, kind of our workhorse and started to get a little bit tired,” said Wardlow. “Cypress Bay is a good hitting team so we tried to mix it up with a lefty and brought in a live arm in MJ and he came in and threw strikes and did his job. We’ve got a lot of arms on our staff – they get called in to perform a role and they did that.”

The night turned out to be a strong outing by Cypress Bay starter Mateo Gray. Just a freshmen, Gray was terrific over the course of his five innings pitch, giving up just four hits while striking out nine Raider batters.

Unfortunately one of those four hits was a bit one though, that when No. 8 hitter Vincent Mingarelli stepped up with a runner on and two outs in the last of the fourth and hit a high towering shot over the left center field fence for a two-run homer to stake Robinson to a 4-0 lead. Like the two runs in the first, these two were unearned as well as a throwing error at shortstop on a routine ground ball allowed Roger Vergara to reach first to lead off the inning.

After Gray struck out the next two batters, which normally would’ve had him out of the inning, Mingarelli launched his first pitch over the fence.

“My coaches have been telling all year to be aggressive when I got in there and tonight, when I got the chance, that’s what I did,” said Mingarelli. “I got a fast ball high and in and just turned on it. I wasn’t sure if it was high enough to carry over the top of the fence but it got there.”

After Gray retired the first two St. Thomas batters to start the first inning, a hard shot to first by Daniel Cuvet got underneath the first baseman’s glove to keep the inning alive. And it proved costly as Gray then hit Jack Clarke to put two runners on before giving up back-to-back RBI singles to Vergara and Logan Piedra to stake the Raiders to an early 2-0 lead. 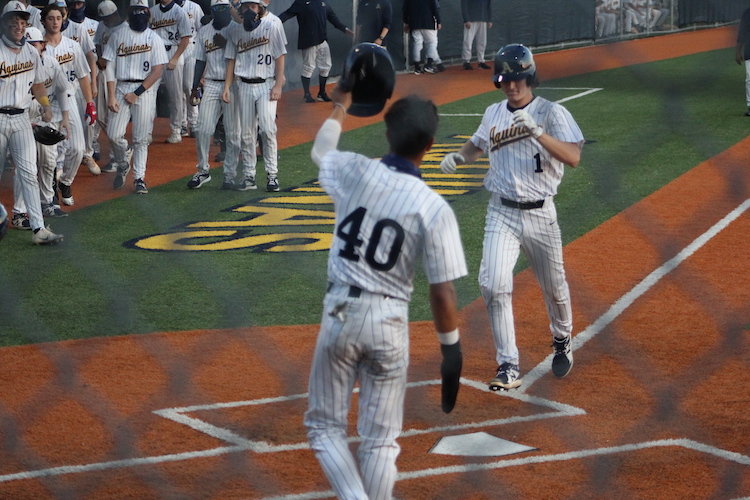 Despite the loss, Cypress Bay head coach Bo Diaz was upbeat after the game as his freshman pitcher handled himself with remarkable poise against a big-time opponent.

“I think tonight was a great opportunity for us to put Mateo on the mound against a very tough opponent and the young man was terrific out there,” said Diaz. “St. Thomas is stacked from one to nine and to give him the ball early in the season to build his confidence against a team like this is only going to make him better towards the end when we really need him.”

Diaz was also happy that his team hung tough and kept battling as well.

“When you play a game like tonight, it’s a gauge and that’s what we want,” said Diaz. “We want to play the best and tonight was a great opportunity for us to learn a few things about ourselves and also build some confidence because we found out tonight that we can hang. A 4-1 game in which we outhit them and the four runs were unearned makes me really feel like we battled. We put ourselves in a good position to come back later in the game and all I can ask of my guys is to keep fighting all the way to the end.”