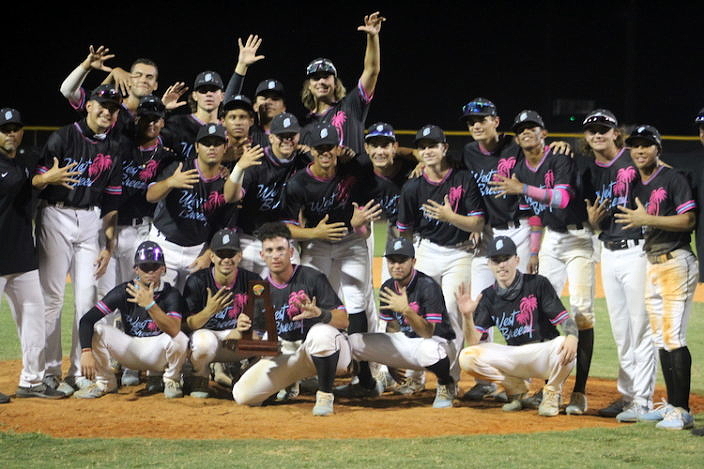 Some day many years down the road, Derek Bermudez might just sit his little kids down in his lap and tell them all about the night daddy hit a dramatic walk-off three run home run in the last inning to give his team the district championship.

But on Thursday night, Bermudez was content to just celebrate with his teammates and coaches as they mobbed him in mass unity as he crossed home plate.

With his West Broward team having enjoyed its best season in program history (19-4 regular season record and No. 3 HSBN Broward ranking), the Bobcats were trailing 3-1 and down to their last three outs as they entered the last of the seventh, on the verge of being upset by Hialeah Gardens in the 7A-14 championship game.

But after his team plated one run and put two runners on base with one out, Bermudez stepped to the plate and launched a 2-1 change up from Gardens reliever Ruben Ganderilla high into the night and all the way over the center field fence. The three-run blast gave the Bobcats a dramatic 5-3 win over Gardens and their first district title since 2017.

Even though their season was going to continue regardless of the result as both championship participants advance to the regional round, winning the game now will give West Broward a slightly easier path to its Holy Grail goal of the state final four in Fort Myers.

A loss would’ve sent them on the road to Coral Springs next Friday to play a very good Taravella team. Instead, they will now get to play on their home field and host Western on Friday, May 7 at 4 p.m. after the Wildcats dropped a 9-1 decision to Taravella in the 7A-13 title game.

“I had a 2-1 count and he left his change up up and I just tried to drive something somewhere because we had the tying run in scoring position,” said Bermudez who, despite only being a junior has already committed his baseball talents to North Carolina State. “When I connected I knew I had really gotten it good but wasn’t sure if it was good enough to clear the fence. When I saw the center fielder didn’t even move, I wasn’t sure if he was ready to make a play on it or he just wasn’t moving because he knew it was over the fence. What a feeling when it cleared. What a great moment and I’m just happy for my teammates because they did things earlier in the inring to put me in a position to do that.”

After Ganderilla had come through in a clutch situation in the last of the sixth when the Bobcats had loaded the bases with two outs and he had struck out Sebastian Perez on four pitches to end the inning, he got himself into trouble in the seventh when he issued a one out walk to Brandon Vargas.

After Vargas stole second and went to third on a wild pitch, he scored when Alejandro Sardinas hit a deep ground ball to shortstop that Sardinas just barely beat out for an infield hit on a bang-bang call at first and it was 3-2. Bryce Courson then singled through the left side to put runners on first and second setting the stage for Bermudez’s big moment. 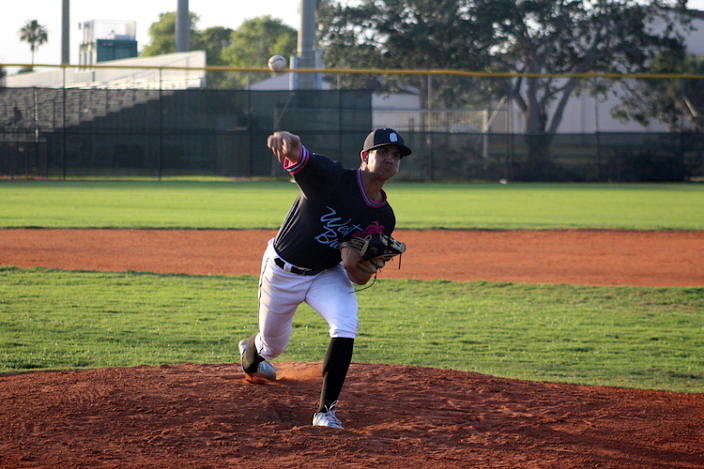 “If there is a kid on this team that you want up in that situation, it’s Derek because he’s been clutch for us all season long,” said West Broward manager Howard Stein. “I knew he was coming up in the inning and was hoping we could get him to the plate with runners on. This is a determined bunch of kids in our dugout who never gave up tonight even though most of the night was a big struggle because their pitcher was really tough. They kept believing that if they just kept grinding, that something good would happen and darned if it didn’t.”

The pitcher Stein referred to was Gardens starter Angel Gonzalez who was borderline masterful over the first five and two-thirds innings he pitched as he completely stymied the powerful hitting West Broward lineup, holding the Bobcats to just two hits while striking out nine.

The only run he gave up was unearned when West Broward began its journey back from a 3-0 deficit with an unearned run in the fifth when, after a walk and stolen base, Jason Wachs scored from second on a two-out throwing error by the shortstop.

“He (Gonzalez) really gave us problems all night,” said Stein. “He was staying ahead in the count and keeping all his stuff down low and when a pitcher can do that, he will give any team problems offensively.”

After Gonzalez recorded the first two outs of the sixth, he hit Juan Correa and walked Stephen Mason. Even though he still had room before reaching his max pitch count, Gardens manager Julio Veñas came and got him, inserting Jerryk Caceres who proceed to wild pitch the runners forward and then walk Jason Wachs before he brought Ganderilla in to put out the fire.

After getting Gonzalez an early lead by plating a run in the first, the Gladiators gave him some added cushion by playing long ball in the fourth and fifth as Ronnie Belliard went yard off WB starter Mike Fortes in the fourth and Jose Perez took it deep with a solo shot in the fifth to make it 3-0. 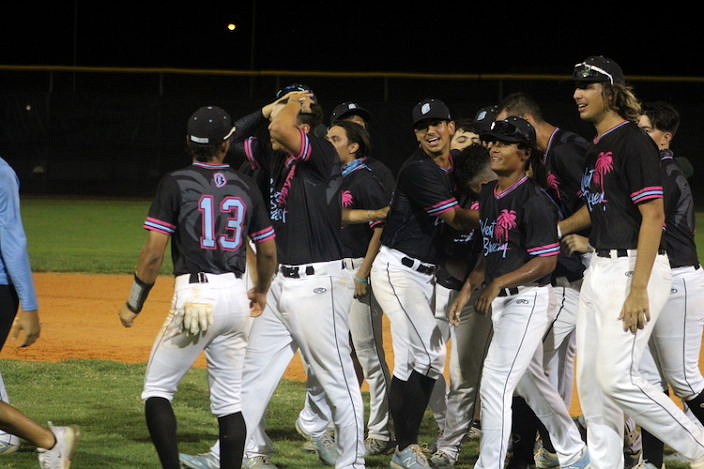 Somewhere in the middle of those celebrating West Broward players is Derek Bermudez, who is mobbed by his teammates following his dramatic 3-run walk off home run.

The loss dropped the No. 3 seeded Gladiators to 8-12-1 and instead of hosting Western in the regional quarterfinal round, they will be the ones that now have to travel to Coral Springs to take on Taravella. As disappointed as Viñas was over the lost opportunity he and his players had to pull off the upset and capture the district trophy, he was still upbeat when he headed towards the team bus.

“I played professionally for a long time so I’ve been part of many tough losses along the way but you hurt for your kids because they really played their hearts out tonight and probably deserved this one,” said Viñas. “Especially Angel because was really magnificent out there. Even though he had not reached his max pitch count, he was starting to leave his pitches up which is the first sign of getting tired so I came and got him. Give West Broward a lot of credit, they kept fighting and found a way to come out on top.”