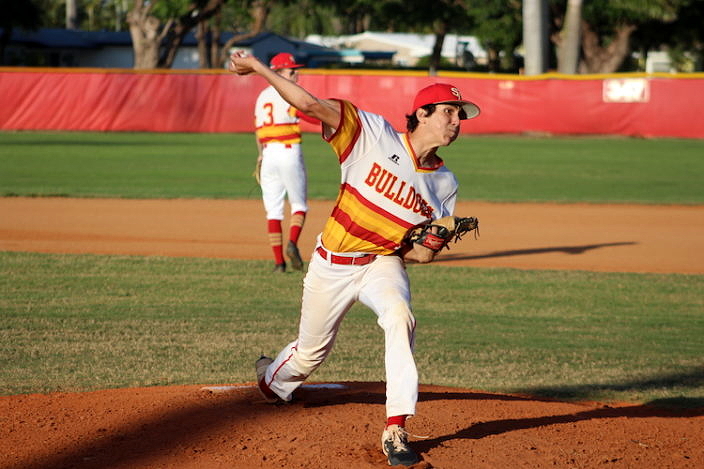 A rough 1-4 start to the season probably seems like a long time ago for South Broward.

The Bulldogs spotted Hollywood Hills an early 2-0 lead but quickly responded with 12 unanswered runs to cruise to a 12-2 five-inning victory on Monday night at South Broward High School.

The win marked South Broward’s eighth in its last 11 games after the slow start, moving the team’s overall record to 9-7 and, in a district that would appear to be wide open, has Bulldog players and Manager Darin Koch thinking good things could be in store when the district playoffs start later this month.

“I try not harp too much with the kids about wins and losses as we try to focus more on competing, learning and continuing to get better each game,” said Koch. “But yeah, right now our district does feel wide open, we’ve got two good pitchers on the mound and feel like we have as good a chance as anybody to come out of here.”

The pitchers Koch referred to were David Mayorga and Jacob Laroque, as the two proved unhittable on Monday night, combining for a five inning no-hitter. Mayorga started and pitched the first four innings, striking out seven batters and five in a row at one point before Laroque retired the side in order in the fifth to end the game.

Koch wasn’t feeling too good in the top of the first though when Mayorga walked the first two batters of the game and Hills stunned the Bulldogs by scoring twice to take a 2-0 lead.

But South Broward didn’t trail for long as the Bulldogs immediately answered with four runs in the bottom of the inning before scoring four more in the second and third innings to build their 10-run lead.

“A shaky start but David got it back together quickly,” said Koch. “Sometimes he doesn’t finish the way he should but he self-corrected there and we got through it. Then the boys were able to run, put some balls in play, stole some bases and took advantage of our speed and put together some runs we were good from there.”

After he walked those first two batters (George Paz-Leon and Emmanuel Ocando), Mayorga wild pitched them to second and third and each then came home on consecutive ground outs to second base by Adam Liotta and Rodrigo Escobar. 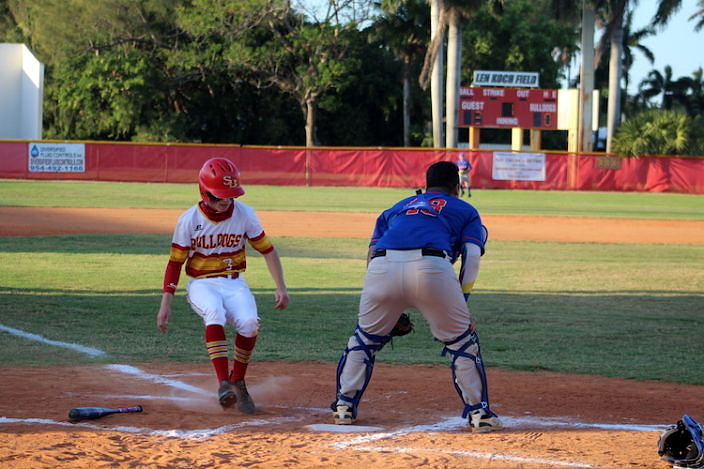 After the walks, Mayorga then mowed down 12 of the next 13 Hills batters (a leadoff walk in the fourth being the only blemish) before Laroque came in and retired the side in order to nail down the five-inning no-no.

“Sometimes it’s hard to come out and start the game really strong and I was battling out of the gate,” said Mayorga. “But it didn’t take long. I just took a deep breath, relaxed and started throwing at my catcher’s glove. You stop thinking and just throw the ball. Getting those runs in the first inning to retake the lead was big as well. It helped me relax.”

A walk to Tyler Ochs, Luke Valenchis getting hit by a pitch and an infield single by Laroque loaded the bases with no outs in the first to set up South Broward’s first four-run inning. Dominic Martinez followed with an RBI sac fly to center before cather William Hall singled in two more runs. Mayorga finished things off with an RBI bunt single.

After Andres Villagran and Alex Lopez both got hit by pitches to lead off the second and advanced to second and third on a wild pitch, Oaks brought them home with a single to make it 6-2 and the rout was on.

The big hit in the four-run third was a two-RBI triple by Valenchis, who came into the game as the team’s leading hitter with a .353 average.

“A lot of us tooks some time off last fall and didn’t play travel ball and our coach told us before the season that it might take some time to get the bats hot and work the kinks out in the infield,” said Valenchis. “We started with a high intensity schedule and just kept calm knowing that things would eventually start coming together and now we’re seeing that happen and bringing plenty of high-energy to our games.” 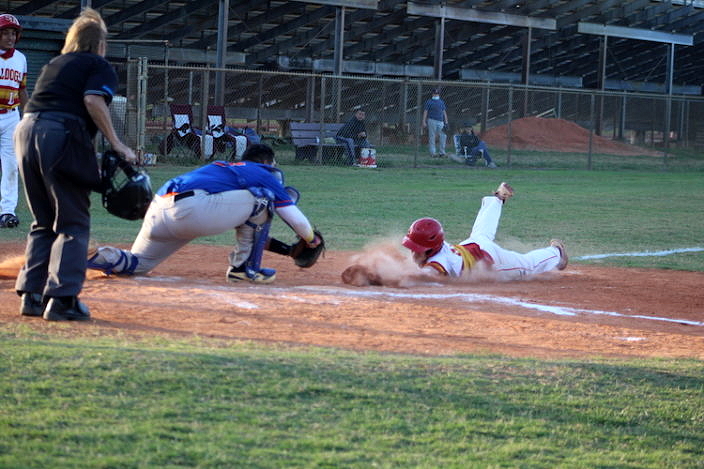 For the Spartans, it’s been a rough 2021 campaign as they fell to 1-9 after having to deal with a two week shutdown of the program in early March due to a minor COVID-19 outbreak.

“It’s not easy but you have to work to find some of the positive things the kids do in a game and try and build on that,” said first year Hills manager Antonino Schembari. “Not a lot of good things went right for us tonight but a few things did, most notably we did a nice job of taking advantage of a couple of walks and turned that into two runs in the top of the first inning so that’s something that you look at. Stress the little things. When you’re trying to build a program, you have to start from somewhere and that’s where we’re at right now.”

It was also a homecoming of sorts on this night for Schembari who played for the Bulldogs from 2016 to 2018 and was certainly hoping for a different outcome.

“It was definitely something special coming back here tonight as I know a lot of the guys and the coaches,” said Schembari. “A good feeling and a lot of great memories here, but at the end of the day, it’s a business trip. You’re on the opposite side and you’re here to do a job.”