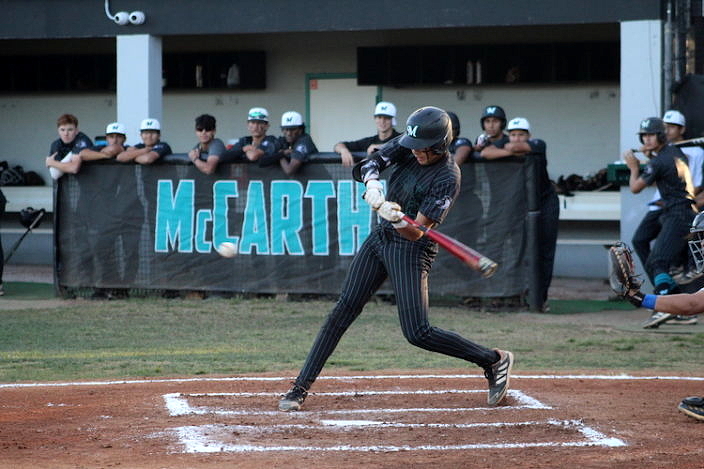 McCarthy’s Antonio Jimenez, a University of Miami commit, leads off the game with a base hit up the middle.

After winning an unprecedented and probably never-to-be-duplicated seven state titles in an eight year span, the Archbishop McCarthy baseball program has spent the last four seasons trying to work its way back to greatness.

With teams like Douglas, Calvary Christian, St. Thomas and American Heritage still considered the top dogs in Broward County, the Mavericks, ranked No. 8 in HSBN’s Broward power rankings, are still working their way back up that ladder and took another step towards that on Wednesday night.

Hosting SLAM Academy, a team entering the game with a .438 team batting average, McCarthy took advantage of five consecutive two out errors to score six runs in the last of the fourth to break a scoreless tie and then held off a furious rally by the Titans in the final inning to hang on for a 7-4 victory at McCarthy High School.

With a big game at American Heritage coming up Friday, the win moved McCarthy’s season record to 12-7-2 while SLAM, ranked No. 10 in the Miami-Dade County power rankings, fell to 11-5.

With starting pitcher Andrew Ildefonso cruising along firing six scoreless innings but having reached a pitch count of 90, McCarthy manager Aaron Vorachek, with his team enjoying a 7-0 lead, went to his bullpen to record the final three outs.

But both Connor McShane, who started the inning and lefty Noah Lott, struggled to get people out. By the time Vorachek went to his third pitcher, Joshua Sanchez, the Titans had scored four runs and still had the bases loaded with only one out.

But Sanchez got it done, striking out Zaid Diaz for the second out before getting Adrian Vega to fly out to right to end the game.

“I sure didn’t think it was going to get that interesting at the end but fortunately we were able to hang on,” said Vorachek. “Our pitching has been good all year, especially our starting pitching and Andrew was terrific out there tonight. To be honest our bullpen has been reliable all season as well and I’m just not sure what happened tonight but Connor and Noah obviously really struggled out there.”

Vorachek admitted that if his team hadn’t enjoyed such a big lead, he might’ve let Ildefonso try and finish it out.

“If the game had been tighter, I might’ve let him go one more and try and finish it because Andrew hadn’t really labored that much but with the big lead that we had, I didn’t think we needed to do that,” said Vorachek. “Fortunately Josh managed to nail down those last two outs for us. Credit SLAM for battling to the end.” 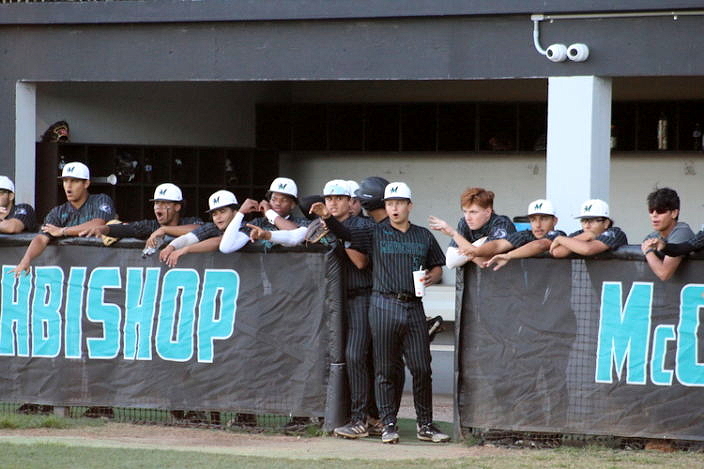 With Ildefonso and SLAM starter Chris Carroll locked in a scoreless pitchers duel for the first three and a half innings, the Titans saw the bottom fall out in the last of the fourth when the Mavericks plated what turned out to be six unearned runs.

The worst part is that the proverbial roof collapse came after there were two outs as the Titans committed five consecutive errors.

After Jake Alfaro hit into a one-out fielders choice ground out for the second out of the inning, it appeared the game would head to the fifth and remain scoreless. But Carroll then issued consecutive walks to Max Loyello and Ryan Hunter to load the bases. When Christian Cordova hit a routine grounder to second base, the inning again appeared to be over.

But the throw to first went wide and Alfaro and Loyello both scored. Antonio Jimenez then came up and grounded to shortstop but another error allowed another run to come in. Stefano Molaro then singled up the middle but a throwing error by the catcher down to second allowed another run to come in. Next came a passed ball and when the catcher threw back to the Carroll to try and cut down the runner at the plate, the throw was wild and another runner came in to complete SLAM’s nightmarish series of events.

“That last inning was tough to watch but at least we managed to hang on so it’s all good,” said Ildefonso who gave up just three hits and only walked two batters while striking out six. “I felt like I was under control all night. I was changing up my speed all night, starting them off with a fastball inside, get them off timing and then hit’em with the slider outside, which is my go-to pitch, to strike them out.” 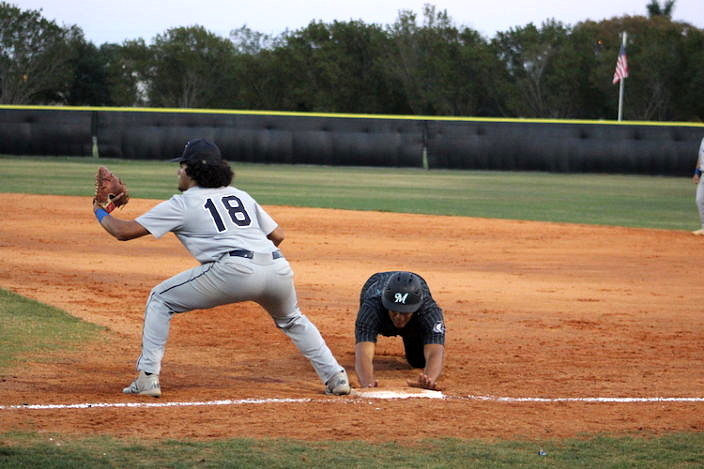 After McShane hit two SLAM batters and walked two batters to start the seventh, recording a pop out by Carroll in between, Lott entered and was greeted by an infield single by Marco Navarro to bring in another run and a 2-RBI single to left by Jorge Olivo. When Lott walked Michael Cubilete to load the bases, the SLAM dugout was crazy with excitement. But that’s when Sanchez entered and managed to put out the fire.

“It was a really good game tonight and a good win but that last inning was definitely nerve-wracking for us because we never thought it would get that close,” said Jimenez, a University of Miami commit who went 2-for-3 with a run scored. “But you have to credit SLAM as well, they kept fighting right to the end so credit them for that.”

With Manager Eric Florin missing the game, assistant coach Julio Mendoza was at the helm, and was pleased with what he saw from his team.

“We played a good ball game with the exception of that end of the fourth inning but unfortunately that counts as well and it wound up costing us big time,” said Mendoza. “When you play a really good team like McCarthy, you just can’t give them anything and expect to get away with it and we didn’t. We still feel like we’ve got a really nice team here though. We’re just trying to polish a few things up but we feel like we’re a good ball club, one that could make a little noise in the postseason and get us on a bus to states.”