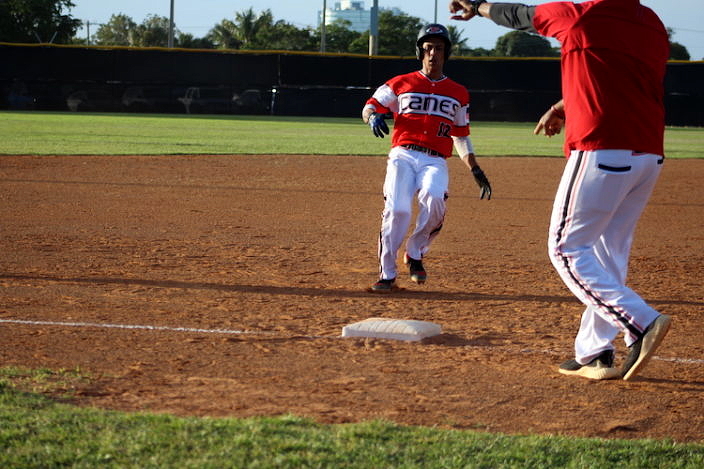 After playing a tough schedule the first half of the season and currently stuck in a three game losing skid, the Hurricanes of Northeast High School were looking to get back on the wining track on Wednesday night.

Thanks to some solid offense and good relief pitching, they managed to do just that as they outscored South Plantation 8-6 on their home field to move their season record to 5-7.

“We just kept battling,” said Northeast Manager Mike Goulette. “It’s not easy after you lose a big lead to keep your poise and put the wheels back on and recover but we managed to do that tonight so credit to our kids.”

Goulette referred to his team’s early success as the Hurricanes plated four runs in the last of the second to build a 4-0 lead, chasing South Plantation starter Shane Holley. Then only to see it all disappear in the very next inning when the Paladins charged right back scoring five runs in the top of the third, chasing Northeast starter Dylan Oborne.

But Roberto Zuany and Connor Batchelder came to the rescue on the mound as they finished out the final four and a half innings and, despite yielding their share of walks and hits, managed to keep the Paladins off the board until the last inning.

In the meantime, Northeast managed to get the game tied at five with a run in the fourth, thanks to a brilliantly executed bases loaded, one out suicide squeeze bunt by Batchelder and took the lead in the fifth when catcher Joshua Arena delivered a clutch two-out base hit to left scoring Zuany to put the Canes up 6-5.

“I actually thought coach had given me the bunt sign on the first pitch and I laid one down,” said Arena. “Then I quickly discovered I’d missed the sign and when I got the second pitch, it was middle in and I took it the right way and put it in play.” 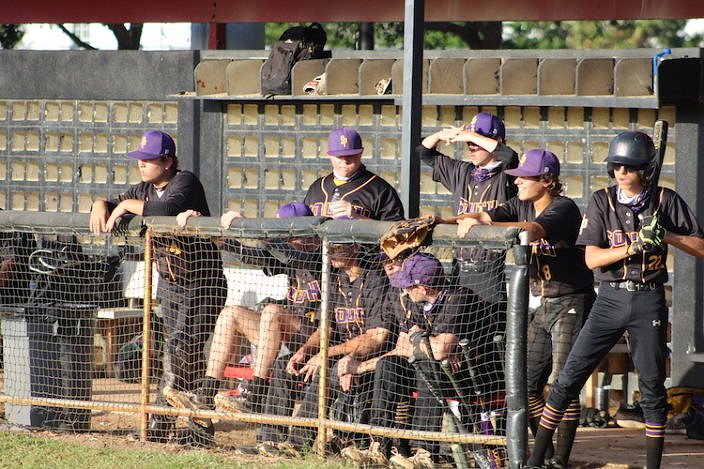 Northeast then added two more runs in the last of the sixth when, with runners on first and second and one out, Oborne ripped an RBI double to left center and Zuany followed with an RBI single to left to make it 8-5.

Those two runs proved quite valuable as the Paladins, after Batchelder had recorded the first two outs in the seventh, put together a two out rally.

A walk to Justin Baranski was followed by a base hit to right by Brady Reinhart putting runners on the corners. Blake Perez then ripped one in between third and shortstop for an infield single scoring Baranski from third. When Batchelder wild pitched the runners up to second and third, suddenly the Paladins had the tying run in scoring position.

Time for one last heroic effort from Batchelder. That when pinch hitter Austin Bertsch hit a sharp high chopper right back to the mound. Batchelder leaped high and speared a ball that otherwise might’ve gone up the middle into center field tying the game, with the top of his glove and tossed it to first for the final out.

“The most stressful out and the toughest out to get in a game is usually the last one and that was sure the case tonight,” said Batchelder. “We fought hard and fought back after we lost the big lead and that’s what you have to do sometimes.”

You also need your infield to make a play or two along the way and Batchelder got that as well in the sixth after he issued back-to-back walks and the Paladins, only trailing 6-5 at the time, put runners on first and second with only one out.

South Plant’s Stephen Livingston then hit a sharp ground ball to second base that Angel Gonzalez and shortstop Kevin Grzeszczak turned into a perfectly executed turntable 4-6-3 double play to end the inning.

“Oh my gosh, that was so huge,” said Batchelder. “I was really struggling, falling behind on my counts, my curve ball wasn’t working, I only had my fast ball and change up and my infield was clutch for me and got me out of that jam.”

But back came the Paladins in the third and they did almost all of the damage with two outs. A one-out double by Daniel Swirsky was followed by an RBI single by Livingston.

One out and two walks later, the bases were full for Reinhart to hit a gapper to right center for a double and two RBIs. Blake Perez then followed with a 2-RBI shot into the left field corner for a stand up triple and Goulette was headed to the mound to get Oborne.

“It was Dylan’s first start of the year and we were trying to build up his pitch count and give him a little confidence,” said Goulette. “He might’ve been pushing a little too much and once he reached a certain pitch count he started to get tired so I had to go get him. But Robert and Connor came in and both did their jobs.”

For the Paladins, the 2021 season has been a rough one as they fell to 3-10. But half of those losses have come to Cypress Bay, St. Thomas Aquinas, Cooper City, West Broward and Calvary Christian, five teams with a combined record of 51-16. Manager Trevor Chang-Leung was still pleased with the effort on Wednesday night and is still hopeful about his team moving forward.

“I’m proud of the kids because they fell behind by four runs early and battled back,” said Chang-Leung. “They always battle and show a lot of heart. We’ve had a really tough schedule this year, I think one of the top schedules in the county and as a result these kids are getting better and better. We have a bunch of freshmen and sophomores that are stepping in and starting to contribute so I think this tough schedule will help us when we get to districts.”