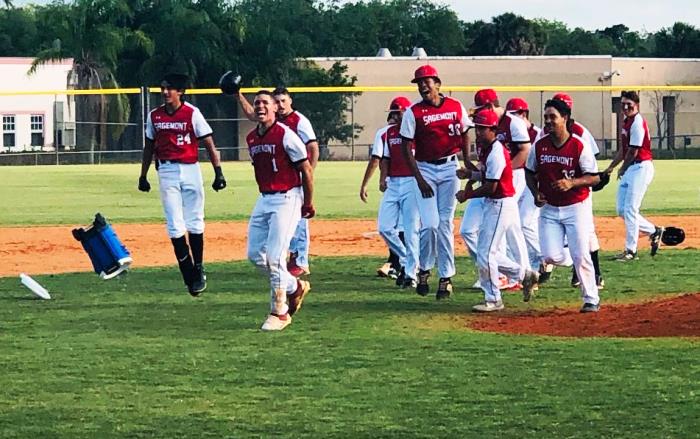 One could almost see the flames coming off the bat of Alejandro Simo on Tuesday. The sophomore catcher already had multiple hits when he came to the plate in a tie ball game in the bottom of the seventh inning, and he added the biggest hit of the day by lining an RBI single into left field that scored Akira Nakamura to give the Sagemont Lions a 7-6, walk-off win over the visiting Archbishop Carroll Bulldogs, at Tequesta Trace Park in Weston.

“After the coach intentionally walked the batter in front of me to load the bases,” said Simo. “Coach Alex told me to look for a pitch I could drive. With the count 1-0, I was ready to attack the next pitch. He threw me a fastball, and I was able to drive in to right field and help my team get the victory.”

The Lions (6-4) rallied for two runs in the seventh for the comeback victory, after the two teams battled back-and-forth in the slugfest. The lead changed sides three times, and the two teams combined for 19 total hits and 13 total runs.

Simo led the way by going 3-for-4, and he was the only Lion batter to collect multiple hits on the day. Every Sagemont starter reached base to contribute, however.

Trailing by a run and down to their final three outs, all six batters in the seventh reached base. Andres Martinez lined a single past third leading off, but was caught stealing. Eric Vega then reached on an error and also scored off an error after Nakamura singled to right. Hermes Alfonso singed and Hayden Stilphen walked to load the bases and bring up the hot-hitting Simo, who deposited a 1-0 offering to right field for the winning hit. 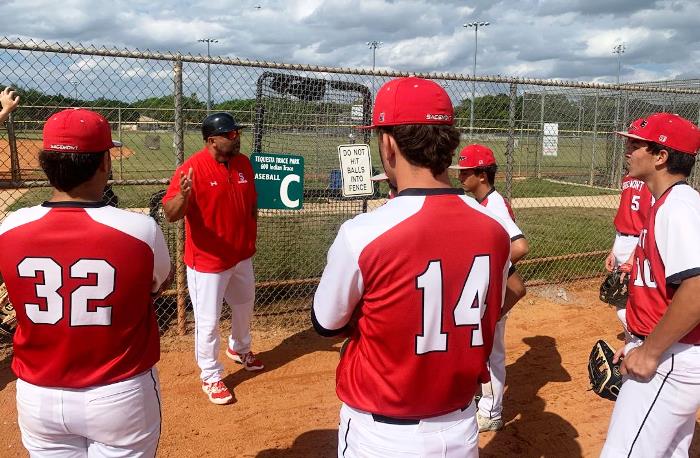 The Bulldogs got the scoring going with three runs in the top of the second. Noah Perez connected for a triple, and both Danny Lozano and Adrian Falcon walked to load up the bases. Adrian Astudillo then came through with a base hit to left that drove in two runners, and Eduardo Perez followed with an RBI single.

Sagemont answered back to even things back up with three runs in the fourth. Julian Irizary had a two-RBI triple and then scored on a sac-fly RBI off the bat of Cole Fineberg.

But Archbishop Carroll responded with two runs in the fifth to retake the lead. Astudillo reached on an error, Perez walked and Luis Rondon singled to fill up the bags. Karlo Aguirre came through with an RBI single, and another run came in off an error.

The tug-of-war continued, as Sagemont inched closer with a run in the fifth and sixth, while the Bulldogs added another run in the sixth to help maintain their lead heading into the bottom of the seventh.

The win was a big one for the young Lions.

“It was definitely a great comeback win for us,” said Sagemont Manager Alex Gonzalez. “We have lost many close games this season because we could not finish in the later innings, or made mental mistakes that cost us.”

On Tuesday, however, the Lions turned the tables on their early season close game misfortunes.

“This team is very young,” said Gonzalez. “I am just trying to get them to play the game the right way and stay focused for seven innings. I was proud of how they fought back today, and was able to win the game there at the end.”