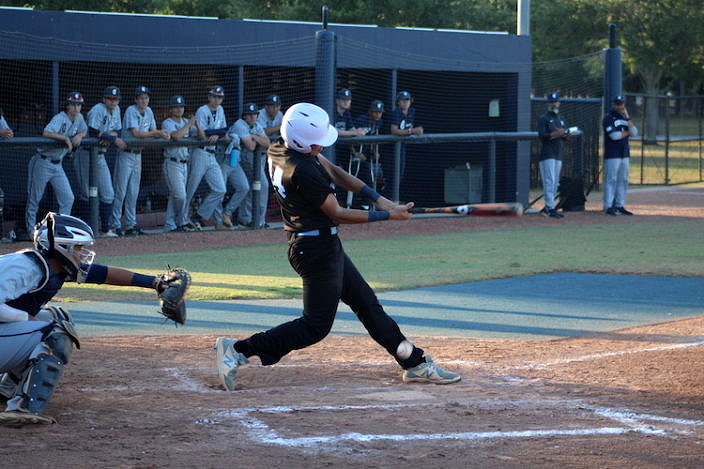 They may have been the last two batters in the order but that didn’t mean Mason Elrod and Colton Yancy were any less important to their Pembroke Pines Somerset Academy team on Thursday night.

As it turned out, they wound up being the two biggest offensive contributors for the Panthers as they put their own two-out rally together in the bottom of the fourth to score the tiebreaking run which stood up as Somerset edged Gulliver Prep. 2-1 at St. Thomas University.

“A great win tonight over a very good team and we needed it,” said Somerset Manager Arby Sosa who saw his team improve to 10-9 on the season. “Gulliver is a young and up and coming bunch and going to only get better so it’s the kind of win that could really kind of kick our season into gear as it’s been kind of an up and down season to this point.”

With two outs in the fourth and the game locked in a 1-1 tie, Sosa watched his No. 8 hitter Elrod double to right center off Gulliver starter Anthony Aparicio before Yancy stepped up and hit a hard ground ball to third.

But the ball took a high hop over third baseman Luis Aparicio’s head and traveled all the way down into the left field corner for a stand-up triple as Elrod scored what would turn out to be the game-winning run.

“The bottom of our lineup has been struggling lately so it felt good for us to come through tonight,” said Yancey. “It’s rewarding to have that happen and come through like that.”

The one run lead stood up because Somerset starting pitcher Damian Ortega was outstanding on this night.

Ortega took the mound and struck out 11 Gulliver batters while giving up just two hits and walking just one batter in his five-plus innings of work. But the plug got pulled on Ortega’s shutdown performance when Sosa, more concerned about the young man’s arm and future than a regular season game, came and got him when he reached his max pitch count following a two-out walk in the sixth.

He handed the ball to reliever Andy Acosta and things got interesting really fast when Acosta issued two straight walks to Erick Delgado and George Lombard to load the bases. Acosta then went to a 3-1 count on  Brixton Lofgren before he battled back and got the strikeout to end the inning. 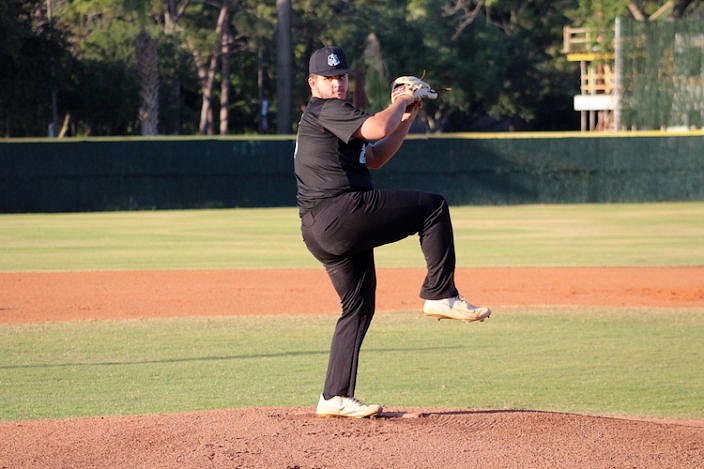 Somerset starting pitcher Damien Ortega was outstanding on Thursday night giving up just two hits while striking out 11 batters to record the win.

Yancey, the team’s catcher, turned out to be the defensive hero as well. After Gulliver pinch hitter Luca Mendez reached on a one-out single up the middle and Acosta struck out Alex Cunill for the second out, the Raider’s leadoff hitter Milo Suarez was at the plate.

When he tried to lay down a surprise bunt and missed, Mendez drifted too far off first and Yancey jumped up and fired a laser down to first picking off Mendez to end the game.

“It was just an instinct play,” said Yancey. “I saw that he jumped too far off the bag when the bunt got missed and just sprung up and made the throw. This was a big momentum win for us tonight for sure. Damian pitched so well and we didn’t want to let him down. If ever a pitcher deserved a win, it was him tonight.”

Indeed as Ortega, a senior who ironically will take his collegiate talents to the very same field he was on Thursday night, St. Thomas University, was masterful all night.

The only run he gave up was in the second when Lombard doubled to right center with one out, stole third and came home on a ground out to second by Lofgren.

Starting with Lofgren’s groundout, Ortega sat down 14 of the next 15 Raider batters, (a one-out single by Delgado in the fourth being the only blemish), and struck out six of seven batters at one point including the side in order in the fifth.

I felt great tonight from the moment I walked out on to the mound,” said Ortega. “I just felt relaxed, was in my zone and just started doing my thing. I fixed my arm slot that I was struggling with earlier in the season and finally got my first W and it felt great. I was definitely nervous there in that sixth inning after I came out, thought I might lose the W but Andy (Acosta) settled down and came through.”

Trailing 1-0, the Panthers got the game tied in the third when Yancey drew a one out walk before speedy pinch runner Kai Francis stole both second and third. One out later, Francis scored when Edward Bravo hit a grounder to shortstop that resulted in an error.

“Damian had been struggling with the strike zone all season but tonight he was just terrific out there,” said Sosa. “He had been getting strikeouts but was averaging a walk an inning. Tonight he never walked anyone until the last batter he faced. He reached his pitch count so I went and got him. He has a big career in front of him at St. Thomas so it was up to other people to step up at that point and get it done and Andy got it done.” 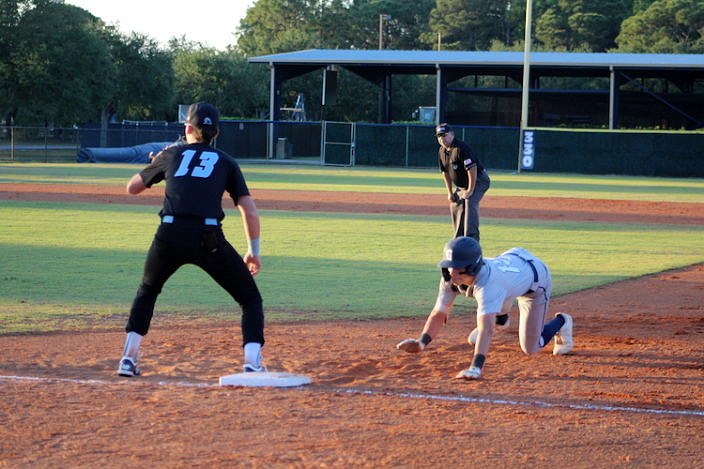 Gulliver’s Luca Tosca slides back in safe at first from a second inning pickoff attempt.

It was a tough loss for Gulliver’s Aparicio who wound up going the distance, giving up just five hits while striking out five as the Raiders are now .500 on the season at 8-8.

“Their pitcher did a heck of a job out there tonight,” said Gulliver Manager Manny Crespo Jr. of Ortega. “His ball moved all over the place, he had good run on it and was hitting all his spots late in the count. I felt bad for Anthony because he pitched a great game as well.”

Crespo Jr. also lamented over what could have been for his team early on.

“We kind of gave them a run early with that two out error and then they got that great hop over our third baseman’s head down the left field line so maybe the baseball God’s were looking out for them tonight and that’s just baseball. Maybe tomorrow night it will be our turn. A great high school baseball game tonight. Anybody that came out and watched this game got a real treat.”