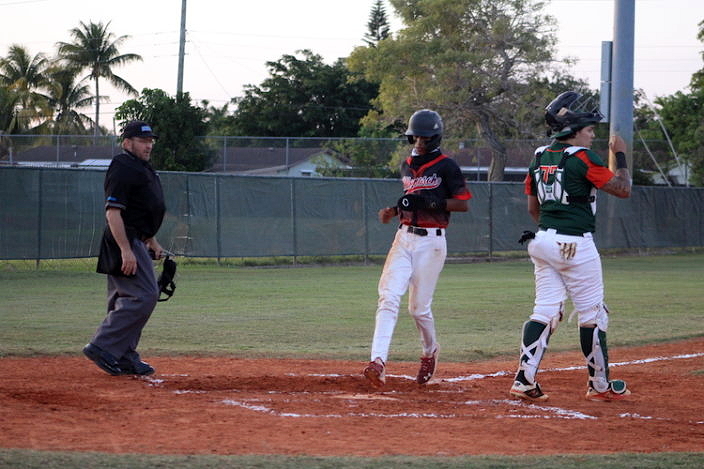 Mauricio Bejarano crosses home plate in the third inning for Monarch’s second run of the night.

It was a nice change indeed for the Knights of Monarch High School.

With their four previous wins having come by one run, two of them in walk-off fashion, the Monarch did not have to deal with any drama on Wednesday night. Instead the Knights got plenty of hitting and pitching to earn a 10-0 win over McArthur, in a shortened, six-inning game at McArthur High.

The win moved Monarch’s record to 9-4 on the season. Having not made a regional playoff appearance since 2015, Knights manager Mike Schmitz and his players are definitely trending in the right direction and starting to think big things could be in store down the road.

“We’ve played some pretty good teams and had a few walk-off wins so we always seem to make it interesting,” said Schmitz. “But that’s why we schedule tough teams so that these guys when it comes playoff time, when it counts, they’re used to it and ready. Obviously we didn’t have to worry about a close finish tonight, but I think we got lucky, because I don’t think McArthur played their best ball. We just grabbed an early lead and took off from there.”

David Berman and Jesse Campos combined for a one-hit shutout, as Berman started and pitched the first four innings before Campos came in and kept the Mustangs off the board in the fifth and sixth innings. Leading 8-0 after five, Monarch was the beneficiary of walks and hit batters in the sixth and managed to plate two more runs to set up the mercy-rule finish.

After taking a quick 1-0 lead in the top of the first when Duilio Baltadano’s two-out single up the middle scored Colby Rohloff from second, the Knights seized complete control of the game by scoring three more runs in the third. Mauricio Bejarano led off the inning with a single and stole second, and he scored one out later on base hit to left by Colby Schmitz. Baltadano then came up and doubled to right-center, putting runners on second and third. 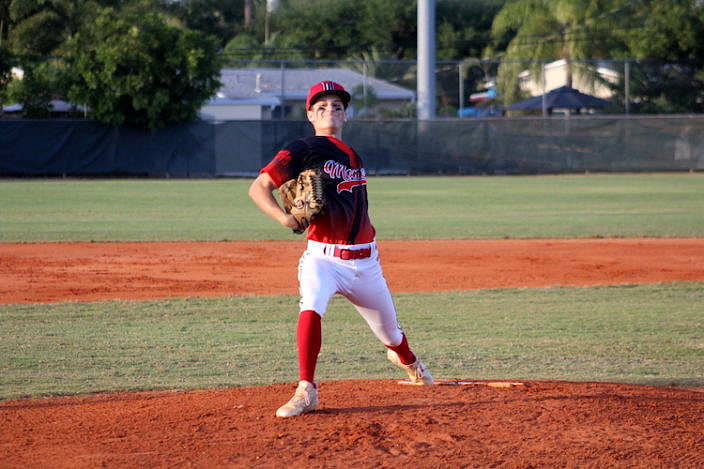 Monarch starting pitcher David Berman turned in a strong performance on Wednesday night allowing just one hit and two base runners in four innings of work.

Schmitz then tagged up and scored on a sacrifice fly to right by Daniel Brennan, before Baltadano scored on a single by Garrett Clark.

Meanwhile, Berman was busy shutting down Mustang batters, as he retired 12 of the 14 hitters he faced. He yielded only a two-out walk in the first and a two-out single in the fourth by Miguel Baez that broke up the no-hit bid and was the only Mustang hit on the evening.

“I just came out and tried to gobble up the outs and let my offense and defense do all the rest so it was all good,” said Berman. “My slider and fast ball were really effective tonight and I was able to locate them on the outside and inside corners. We’re really playing well as a team right now and I think we might have a really good shot at going far this year. We’ll just keep going hard and see where it all goes.”

With Mustang pitchers struggling, the Knights managed to score three runs in the fifth without even hitting a ball out of the infield, thanks to three walks and two hit batsmen. Bejarano then recorded the only hit of the inning, when he doubled to left center with two outs to score Logan Wilcox and make it an 8-0 advantage.

“I had some good at-bats tonight and fortunately was able to help the team,” said Baltadano, the team’s DH who came into the game hitting .375 and went 2-for-2 with an RBI. “We’re growing as a team. A lot of us have been together for awhile, and now we’re learning how to play more together. Between hits, situations, running the bases, we’re getting better everyday and the more wins we pile up the better it gets.” 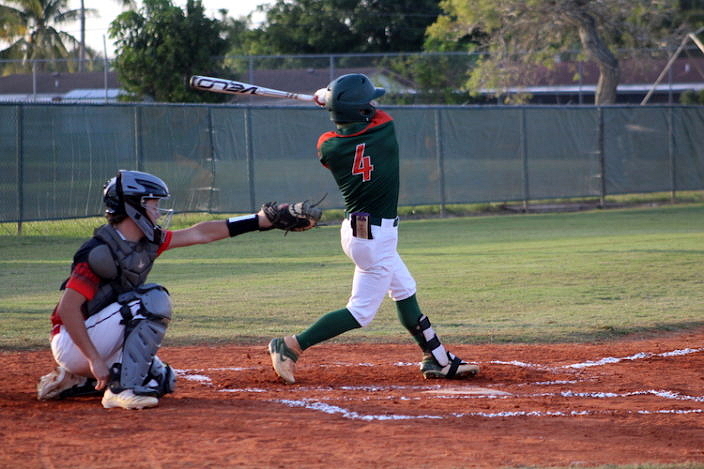 The wins have not been piling up for the Mustangs as 2021 has been a struggle for manager Oddibe McDowell and his players.

It was just two years ago that they put together a magical run to the state final four in Fort Myers, the first state appearance in program history. But all of that seems so very long ago as a team that entered the season with high hopes of having another big season saw its record dip to 4-11.

“Nothing obviously went right tonight,” said McDowell. “We’re 4-11 and everything is a real struggle right now. We’ve got nothing going, everything has just kind of gone sour. It’s a difficult run for us, almost like the pandemic I guess, that’s what we’re in. All we can do is try and come back out here tomorrow and hopefully put something together and play a lot better.”

McDowell referred to McArthur’s home game on Thursday when it will be Senior Night as the Mustangs host neighborhood rival Hollywood Hills at 6:30 p.m.