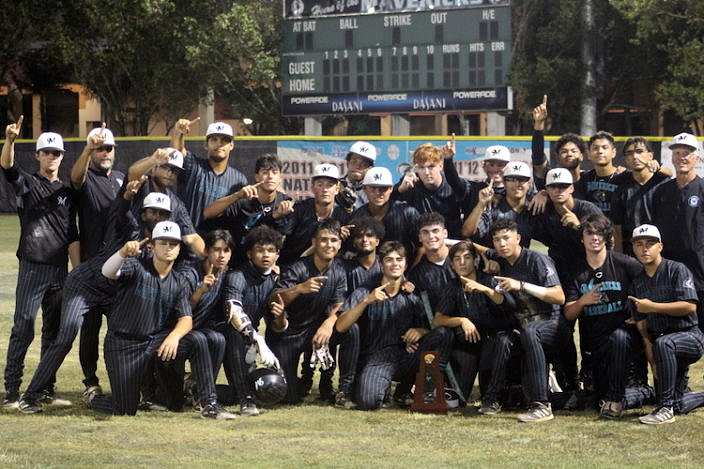 Winning district titles used to be an annual routine at McCarthy but Friday night marked the first one in four years for the Mavericks.

There was once a day not too long ago where winning a district championship would draw nothing more than a casual yawn if you played baseball at Archbishop McCarthy.

After all, when you win an unprecedented seven state titles in an eight year period and send a bushel full of players off to the major leagues in the process, what’s the big deal about winning your district.

But things are different now for the Mavericks. After a change in the baseball administration following the last of those seven state titles in 2017, prompting the exiting of quite a bit of talent, manager Aaron Vorachek took over and was tasked with trying to build things back up again.

Friday night was one more step – one more building block as the Mavericks, after battling Pembroke Pines Charter to six scoreless innings in the 5A-15 championship game, finally crossed the plate to score the only run of the game in the last of the seventh to win it 1-0 and capture their first district title since that last state championship season in 2017.

And when it was over, Maverick players got to celebrate like they haven’t celebrated in awhile with water coolers flying around and players delighting in the euphoric moment.

“These kids have worked very hard for this moment and earned it,” said Vorachek. “Tonight was a real grind, very frustrating because we had our fair share of chances and didn’t take advantage of them so it was a long wait but we finally got it done in the seventh.” 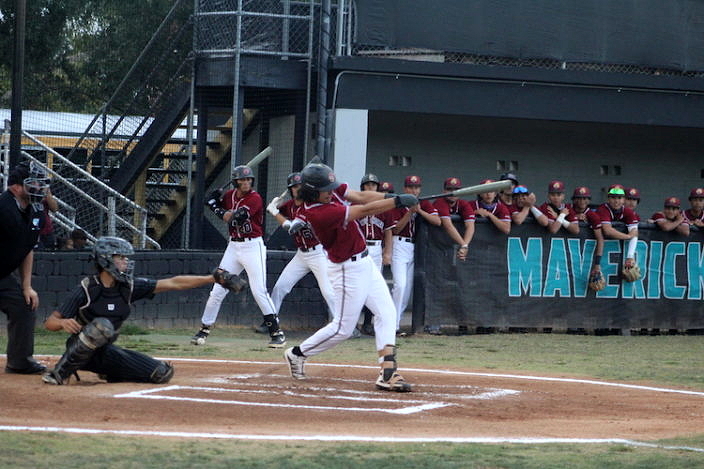 Pines Charter DH Brandon Barcenas rips a single to right in the first inning, one of only four hits the Jaguars had on the evening.

McCarthy, ranked No. 8 in HSBN’s Broward County power rankings, improved to 17-8-1 and will host Killian, which lost to Belen Jesuit in the 5A-16 final, in a regional quarterfinal on Thursday, May 6 at 7 p.m.

Locked in a classic pitchers duel between McCarthy starter Andrew Ildefonso and Pines Charter starter Andres Cruz, the two district foes (who did not face each other during the regular season) went at it like two prize fighters feeling each other out in the ring round after round.

Finally came the last of the seventh when Mavericks leadoff hitter Antonio Jimenez reached on a one-out single to right off Riley Bambino who replaced Cruz after five innings.

Up came catcher Stefano Molaro who had struck out his previous two times up. There would be not strike out this time as he turned on a 2-1 fast ball and drilled it to the gap in left center. Jimenez could only go as far as second having to make sure PC left fielder Yulian Gaston couldn’t get to the ball and took off running when Gaston could not reach it.

At first Vorachek green lighted him home as he came around third before putting up the stop sign at the last second following a great relay throw. When Jimenez tried to get back to third, Pines Charter catcher Ryan Rasmussen fired down to third to try and cut him down but the throw got away down the left field line and Jimenez trotted home into the arms of his excited teammates.

“Only one out so I had to make sure it got past him,” said Jimenez. “As soon as I saw that I was gone. I thought I had the bag but once I saw coach give me the stop sign I had to put the brakes on and get back to the bag. Then I saw it go down the left field line and just popped right back up and came home. Tonight was very special. I guess district championships used to be routine around here but we’ve worked so hard to try and get back up there. We’ve all become a family and we really want to try and bring back what they once had here.” 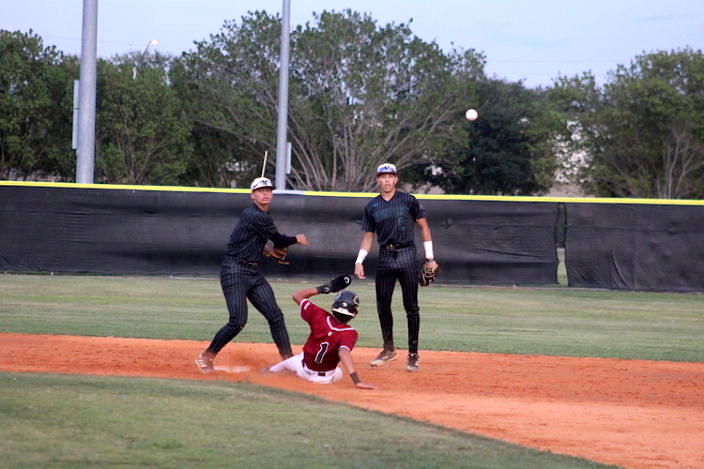 McCarthy second baseman Adrian Vega fired to first base to complete a 6-4-3 double play to end the fourth inning.

Ildefonso was the picture of frustration in the dugout all night as he patiently and then impatiently waited for his teammates to get him a run. He darn near did it himself in the fifth when, with two on and two out, he sent a towering drive over the left field fence that was foul by a foot or two.

“I didn’t have my best stuff tonight but I just tried to keep my composure the whole game and tried to push through for my teammates,” said Ildefonso who scattered five hits while striking out six and walked just one. “In the end we got that W and it feels great to win a district title again. We had forgotten what that feels like. We’re bringing this program back. We understand what it once was and we want to work to try and bring that back.”

Pines Charter, which dropped to 12-12 on the season will travel to Miami-Dade County to take on 5A-16 champion Belen on May 6 at 7 p.m.

“A great game tonight as both teams battled to the last out,” said Pines Charter manager Carlos Iglesias. “Great pitching, great defense, what else could you ask for. It’s unfortunate that somebody had to lose but I’m proud of my kids. Our catcher Ryan, the inning before had made a tremendous play (Rasmussen cut down McCarthy runner Jake Alfaro at third on a back throw with the bases loaded and two outs to end the sixth) and he’s been making big plays for us all year so I can live with him trying to make the throw. He’s been the leader behind the plate and if he had to do it all over again, I’d want him to make the same throw.”