McCarthy Hangs On In Final Inning To Edge Killian 1-0 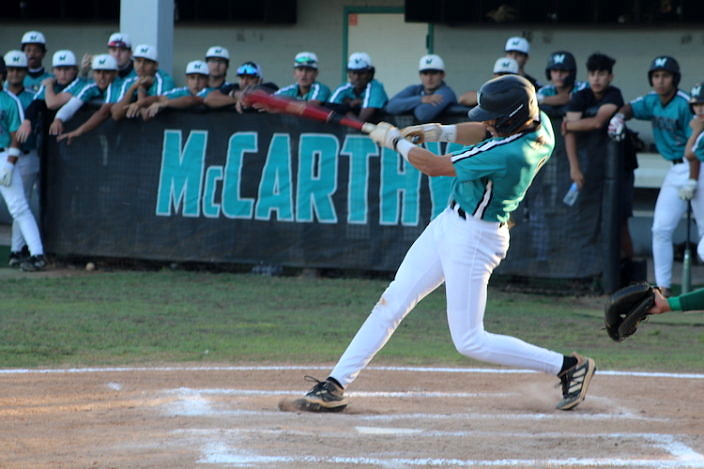 Archbishop McCarthy leadoff hitter Antonio Jimenez rips a shot down to first base.

Nothing like an elimination playoff game coming down to the final pitch.

It was what you might call “a nailbiter special” on Saturday night when Archbishop McCarthy and Killian squared off in a 5A quarterfinal at McCarthy High School.

And while McCarthy ace Andrew Ildefonso has been in many intense situations over the years, none probably matched Saturday night. Trying to protect his team’s one run lead, Ildefonso was in the middle of a frying pan as Killian had the bases loaded with two outs in the final inning with a 3-2 count on Killian’s No. 9 hitter Alejandro Sanchez.

Ildefonso rared back and fired a fast ball right down the middle. Sanchez swung and missed and Mavericks players stormed the mound to celebrate with their ace as McCarthy, on the strength of an unearned run in the fifth inning, eeked out a 1-0 victory over the Cougars.

The Mavericks, ranked No. 8 in the HSBN Broward Power Rankings, improved to 18-8-2 and advance to the regional semifinals where they will travel to Miami-Dade County to take on Belen Jesuit, Dade’s No. 8 ranked team, on Tuesday, May 11 at 7 p.m.

“I just gave him a fast ball down the middle,” said Aldefonso, who came in in relief of starter Adrian Vega in the fifth, of his final pitch. “No way was I going to walk him. He was going to have to swing at it and if he put it play, I trust my defense behind me to make a play but I managed to get it past him and get us to the next round.”

Saturday night’s finish capped off a wild seventh inning that saw Killian put together it’s only legitimate rally all night and was highlighted by a spectacular defensive play by McCarthy shortstop Antonio Jimenez.

After Jason Villalobos led off the inning with a base hit to right, only Killian’s third hit of the night and first since the first inning, Robert Krawczyk struck out after failing to drop down a bunt trying to advance him to second. 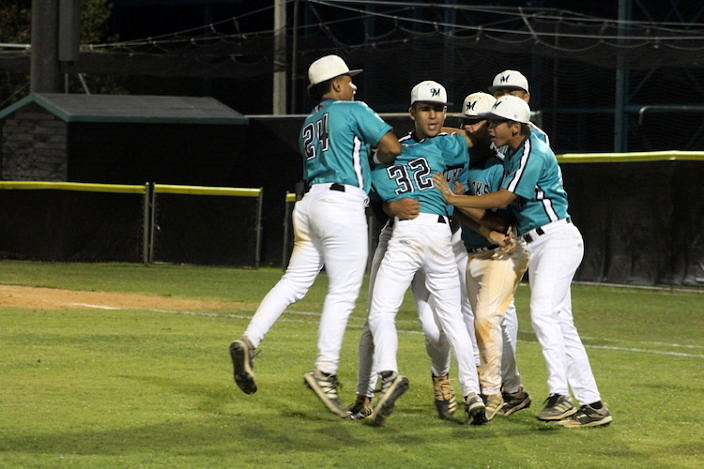 Villalobos then took off for second as Max Orbeta struck out on a hit-and-run attempt and was about to be called out by the base umpire to end the game as Vega (who had moved over to play second after being relieved by Ildefonso) put the tag on him.

But Villalobos’ collision with Vega’s glove jarred the ball loose and the call was safe instead. After Nick Rodriguez walked, pinch hitter Daniel Perruc stepped up and, with two strikes, delivered a sharp ground ball in between third and shortstop that was headed to left field.

With Villalobos flying around third ready to head home, the third base coach quickly put the stop sign up. That’s because Jimenez had laid himself out, diving to his right to knock the ball down, keeping it in the infield and leaving the bases loaded setting the stage for the final Ildefonso/Sanchez showdown.

“I was holding the guy on at second so I had to come off the bag quickly,” said Jimenez, a University of Miami commit. “I bounced off and got a great jump after it came off his bat. I knew what it meant if the ball got past me into left field so whatever it took, I was going to find a way to knock it down.”

The hard-luck loser on this night was Killian starting pitcher Alan Valverde who was every bit of the equal to Vargas and Ildefonso as he only gave up three hits in the complete game effort.

Unfortunately he had to watch as the only run he gave up came on a two-out throwing error by his third baseman. With runners on first and second and two outs, McCarthy catcher Stefano Molero hit a fairly routine grounder to third. But the throw to first went wide and pinch runner Max Loyello raced around third and headed home for what turned out to be the game’s only run. 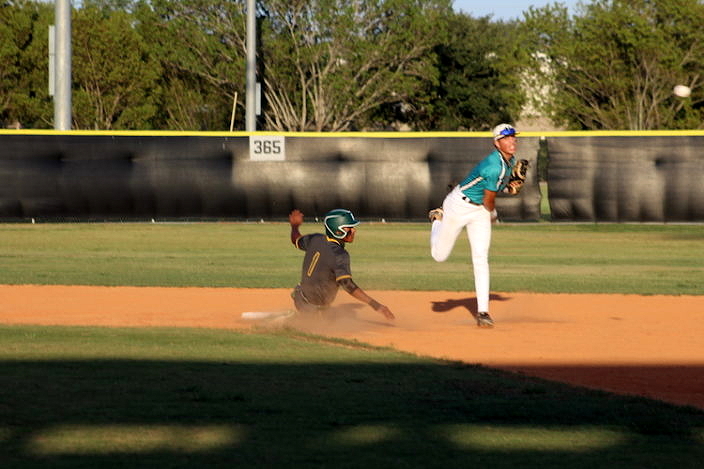 “What a crazy finish, right down to the last pitch,” said McCarthy manager Aaron Vorachek. “Some crazy plays in that inning, especially Antonio diving in the hole. I’m thinking the game is going to be tied up and the kid makes this incredible play knocking it down and then Drew (Ildefonso) steps up on that 3-2 pitch and gets it done.”

Vorachek was quick to point out how fortunate he felt to be advancing and how bad he felt for the Killian players.

“Killian – man what a great team,” said Vorachek. “What a job he (Killian manager Hernan Adames) did with those kids. We didn’t know much about them and did not scout them coming in but I told our kids watching them in pregame, and warned them that we were in for dogfight. I tip my hat to them and for anybody to have to have their season end after a game like this – that’s rough.”

Adames was predictably disappointed after the game but, with a young team and most of the players coming back, was upbeat as well.

“What an unbelievable end to the game and I’m proud of my kids for battling all the way down to the last strike,” said Adames. “We had a heck of a year and we’re very young. We have a bunch of kids that are coming back so tonight was a good learning experience for them. But we’ll have to remember this moment because that’s the only way you get better. A play here or there, a base hit in a crucial moment, the ability to execute and get a bunt down, those little things can be the difference in a game this close and those are the things you have to learn from going forward.”