Written by Anthony Uttariello on May 12th, 2021 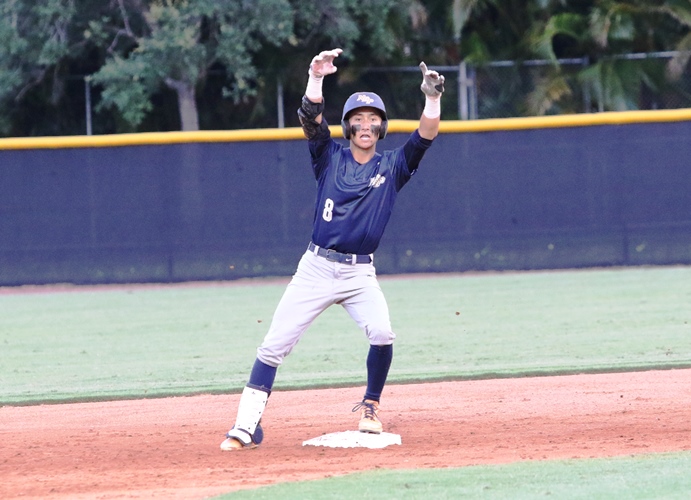 Anyone who has followed Major League Baseball this season, has seen a movement towards low scoring games, where teams struggle to put the ball in play. That style of play has trickled down to the high school ranks, with many district and regional games thus far in 2021 lacking offense.

That is why the 4A regional semifinal game between North Broward Prep and American Heritage turned back the clock, to an age when hitters played fundamental baseball, moving runners over, having effective two-strike approaches, and coming up with clutch base hits simply by putting the ball in play.

The end result was a thrilling, 9-8 North Broward Prep victory, one that moved the Eagles within one game of reaching the state final four.

The first two innings shaped the game to be the pitchers duel everyone expected, between Heritage’s Evan Dobias, and NBP’s Yoel Tejada. Both pitchers threw up zeroes through the two frames.

In the third, however, the Eagles bats came alive. Kris Benson led off with a double, and when Chris Marsh singled, the Eagles suddenly had first and third with nobody out.

A Jonah Diaz single brought in the first run of the game. A fielder’s choice moved runners to second and third, and after an intentional walk, an error brought in Marsh. Gian De Castro then doubled, putting the Eagles up 4-0. They would tack on one more, and take a 5-0 lead into the bottom of the third.

“Our offense has been hitting the ball real well lately,” said Campbell. “Certainly that five run inning early helped set the tone for the game for us.”

The catalyst all night for the Eagles was De Castro. The freshman went 3-for-4, with four RBI’s.

“The way Gian hit the ball tonight was impressive,” said Campbell. “Especially for a freshman in the situation he was in.”

The Patriots, however, had some firepower of their own, and answered the Eagles with two runs in their half of the third. Juhlien Gonzalez had the big hit with a two-run home run. Gonzalez finished the game 3-for-3, with two runs and two RBIs.

In the fourth, the Eagles answered right back with three more runs, stretching the lead to 8-2.

“Every time they scored runs, we were able to come right back and score again,” said Campbell. “That played a big role in the outcome.”

Heritage would score once in the fourth, twice in the fifth, and after NBP put up a run in the sixth, the Patriots scored three more times in the sixth, cutting the lead to 9-8.

In the seventh, reliever Shane Huntsberger, who took over for Tejada in the fourth, was able to close out the regional semifinal win, allowing only a walk in the inning before a flyout ended the game.

“We have come into the past few games with a real aggressive approach at the plate,” said senior Ty Richman. “Our offense has been real hot, and this is the time of year for us to get hot if we want to reach our goals. Now we are just one win away from getting to states.”

“If we just keep doing what we are doing, we will get where we want to go,” said Tejada. “We have one more game to win next week, and hopefully we can keep playing the way we have been the past few weeks.” 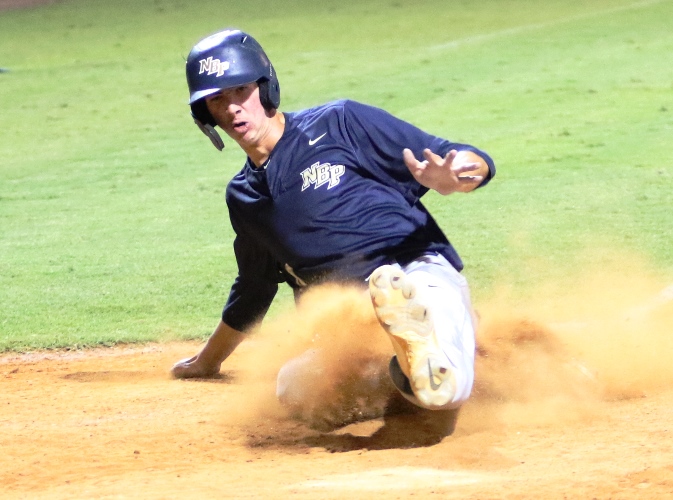 As for what’s next, the Eagles will go on the road to face Mater Lakes Academy, although the team may not have to travel far. Mater Lakes, in the regional finals for the first time in program history, has been playing their playoff home games at Broward College.

So what is the game plan for NBP?

“I don’t know, we will start working on that tomorrow,” said Campbell. “We don’t allow ourselves to look ahead, and we don’t really know anything about Mater Lakes. We will do our homework, and I am sure they will do their homework on us. Luckily we have a whole week before that game, so both teams will go in with their pitchers fully rested and ready to go.”