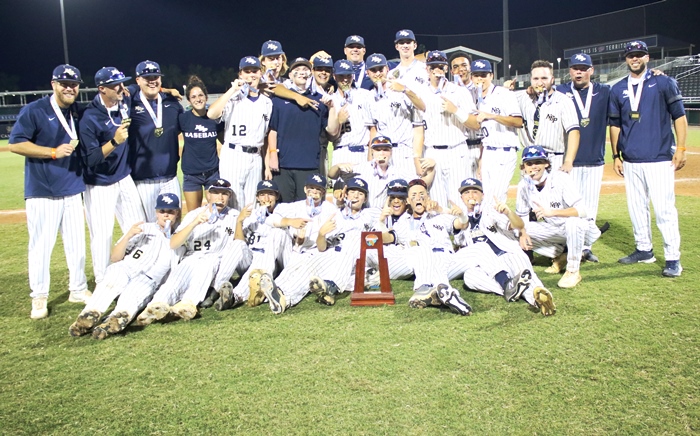 A spirited effort was rewarded with an 8-4 comeback victory in Tuesday night’s Class 4A state championship, as the Eagles rallied late to defeat the North Marion Colts at Hammond Stadium in Fort Myers. North Broward wins its first state title in team history, as a very special group of players rewarded their veteran coaches with a championship that was decades in the making.

“I can’t even put it into words right now. I am so proud of my guys,” senior Tyler Richman said. “They don’t call us the ‘Comeback Kids’ for nothing. We always battle, even when we’re down. We are never, ever out of it. We always battle and we always compete for each other, and this is just unreal. It is unbelievable the chemistry that we have together. The family, the bonds that we created. I love these guys so much and I am so proud and happy for them.”

This family unit is something that has been molded over nearly two decades of dedication from coaches and players alike. Eagles Manager Brian Campbell has been a mainstay at the school, pouring his heart into a program to create a proud family standard. The players love competing for their coaches because they know their coaches truly care, that they enjoy coaching them and they enjoy coaching with each other. As a whole, it is a family because each individual cares that much. 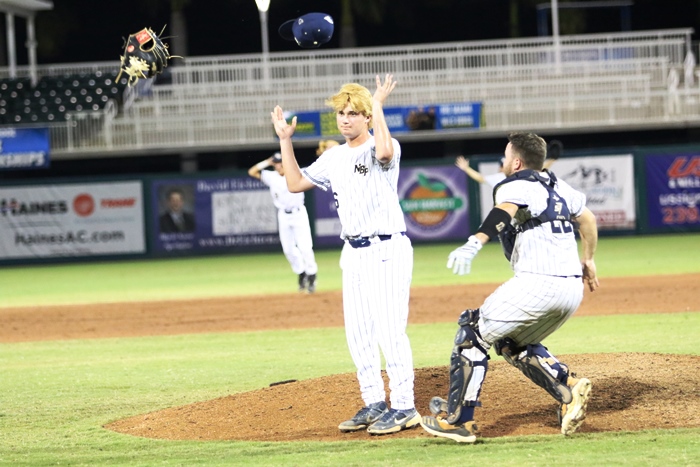 A five-run fifth inning helped pave the way to victory. The Eagles (20-10-1) fell behind right out of the gate, and both teams exchanged blows back-and-forth to see the Colts leading 4-3 heading into the frame. But then the Eagles erupted to power their way to the lead, and they never looked back.

“They were as calm as could be,” Campbell said. “They never thought for a second that they were out of it, not for one second. They kept coming into the dugout and telling me that they’ve got this. Not one second did they think that they were going to lose that game. You know what? That confidence that they had, it is contagious. It rubs off on us as coaches too. They never thought for a second that it was over, and that makes me so proud of those kids. They’re resilient. That is going to take them a long ways in life, not just in baseball.”

The cohesion within the team was most evident in the way that everyone and anyone rose up in the biggest moments. The Eagles had several freshmen in the lineup in crucial moments, and over and over those young players delivered like seasoned veterans. 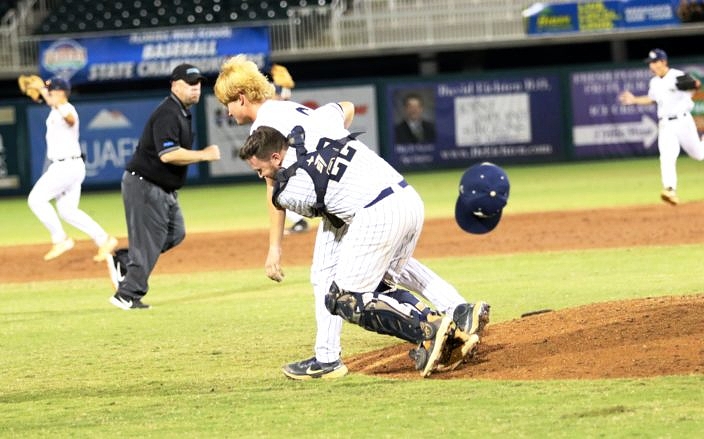 Eagles catcher Dylan Runsdorf also clocks Riley Luft out of work so they can celebrate together.

The Colts (21-9) went right to work applying the pressure in the top of the first inning. Gavin Miller led off with a walk, advanced to second on an errant pick-off attempt and then swiped third base. Elias Garcia and Jacob Walton both also walked to load the bases with one out. Wyatt Campbell then got the scoring started by lifting a fly ball deep to right field and off the wall for a two-RBI double that put North Marion right into the driver’s seat.

“These playoff games have all been very close and we’ve come from behind before,” freshman Gian De Castro said. “With these boys, I never feel like we’re behind. We’ve got each others backs and we know we are going to win.”

Cooper Jones drew a walk to reload the bases and keep the pressure on, but the Eagles responded by turning a 6-4-3 double play that got them out of the inning.

The North Broward Prep offense went to work itself with its first swings. Yoel Tejeda singled with two outs and Joshua Steidl followed with a walk. But Colts starter Hunter Jones answered by recording a swinging strikeout that kept the Eagles at bay. 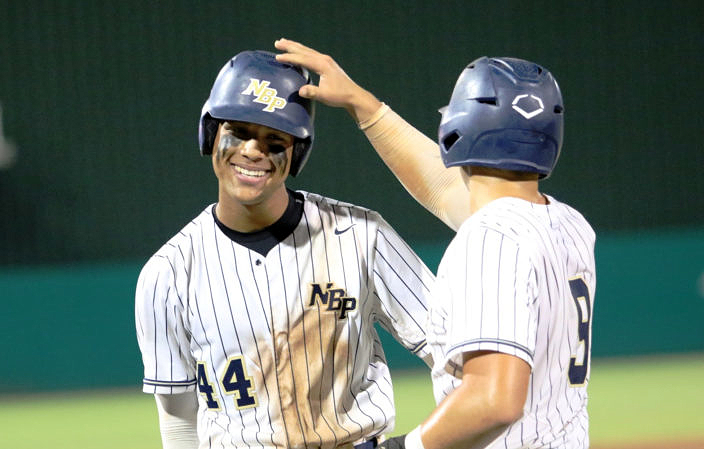 “With these boys, I never feel like we’re behind. We’ve got each others backs and we know we are going to win,” Gian De Castro said.

North Marion got right back at it in the second, as lead-off hitter Connor Burks was hit by a pitch and then advanced into scoring position on a balk call to keep the pressure on. The Eagles dug in and retired the next three batters in order to strand the runner.

North Broward carried that momentum back to the plate to get on the scoreboard in the bottom of the second inning. Gian De Castro jumped on the first offering and smoked it to right field for a lead-off triple and Dylan Runsdorf got a ball on the ground for an RBI ground out that cut the deficit in half.

“There were a lot of fastballs coming in and the pitchers were aggressive. So I was looking for that early,” De Castro said.

But the Colts swung right back and added two more runs in the third. Walton singled with one out and Campbell was next with a shot deep to center field that got past the diving fielder and rolled to the wall for an RBI triple. Campbell then came home off a wild pitch to make it 4-1.

No lead was safe, as the Eagles got right back at it with their next swings. Tejeda got it started with a two-out single, Steidl was hit by a pitch and Richman got the runners moving with a liner to shallow center for an RBI single. De Castro then got a ball on the ground to the right and reached on a throwing error that brought another run across the plate. 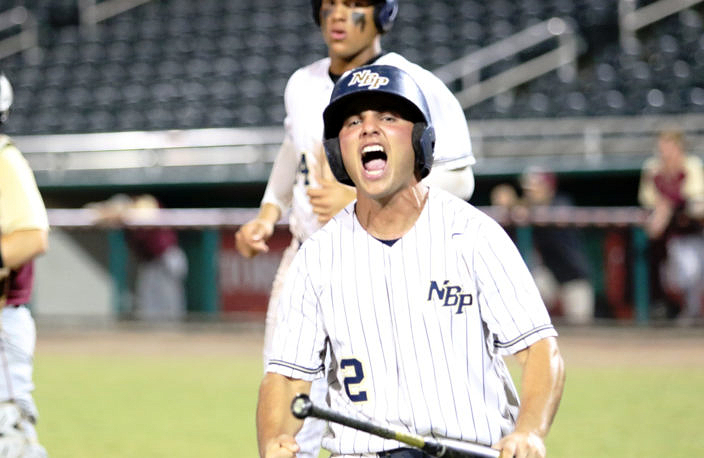 The tide turned to the Eagles in the bottom of the fifth. Tejeda continued to rake by crushing a double deep to right-center field, and Steidel followed with a gritty, seven-pitch at bat that resulted in a walk. Campbell alertly noticed the third baseman playing back and so he had Richman drop down an excellent bunt base hit to third that filled the bags. De Castro then moved them up a station with an RBI single to shallow left field that tied the game at four runs apiece.

“I saw a fastball again and I tried to stay on it. I knew they were going to come inside,” De Castro said. “I don’t even have words for how I feel right now. To do this as a freshman and show out with my boys is unreal. It is indescribable. It’s all for them, for the seniors.”

Riley Luft gave North Broward Prep its first lead by drawing a four-pitch, RBI walk. Runsdorf then sent a bouncer that got past third base to drive in two runs, and the Eagles got another runner across the plate after getting caught in a rundown but avoiding the tag until after the run was scored.

“The kids are the ones that executed,” Campbell said. “They were the ones that worked all year and in every practice, so that these situations aren’t bigger than them. So they don’t panic in situations. It’s just another day in the office. All the work they put in prepares them for that.” 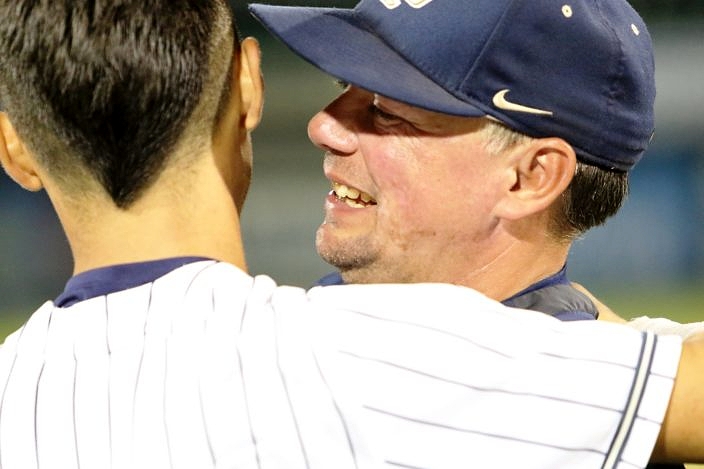 “I love my team. They worked all year, for four years, and I am so happy and proud of them,” Brian Campbell said.

Luft also got it done on the mound. After coming on in relief in the third inning, the freshman went the rest of the way to earn the win. He kept the Colts scoreless from there, allowing a hit and a walk, while striking out five.

“I’m lost for words right now. This is something I’m going to remember my whole high school career,” Luft said. “It’s my first year out of four hopefully awesome years. These seniors just care so much about this team, and the energy is awesome. They are never going to forget this moment, and I am never going to forget this moment. It’s been a long run, every day we are on the field just working hard. We love our coaches and our coaches love us, and we know that. It is awesome.”

Coach Campbell will also never forget this moment. He has given his whole heart to this team and this school, and this accomplishment is a symbol of all those years of dedication.

“I’ve been at North Broward for nineteen years,” Campbell said. “North Broward is home to me. So to win this for our school community that has put so much faith and trust in me over the years, I couldn’t be happier to be part of the team that brings the trophy back home to North Broward Prep.”