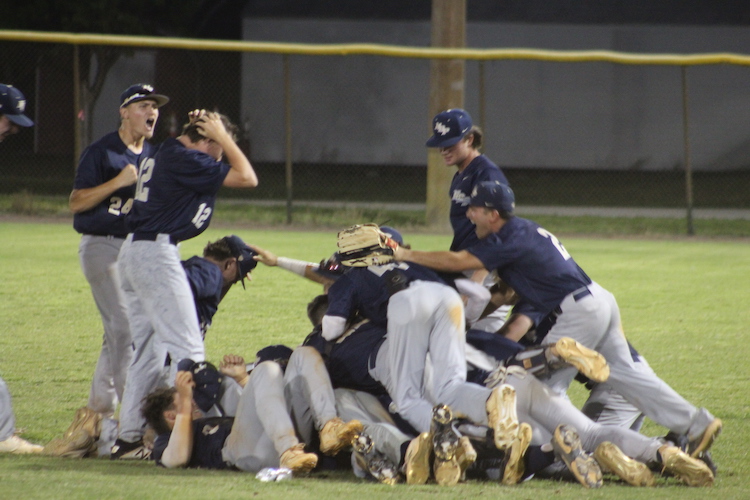 North Broward Prep players were a happy bunch as they dog piled it up following the final out of their dramatic extra inning win over Mater Lakes to advance to the state final four.

And on Wednesday night when his team needed him in the most crucial moment, Marsh was right there again with what turned out to be a season-saving play.

That after firing a bullseye strike to catcher Dylan Runsdorf following an Andy Hernandez base hit to cut down what would’ve been the game-winning run in the last of the seventh for Mater Lakes Academy and instead sending the game to extra innings.

When the Eagles scraped across a run in the top of the eighth and retired Mater Lakes in the bottom of the inning, they had themselves a dramatic 2-1 victory over the Bears in a Region 4-4A final at Broward College, Mater Lakes’ defacto home field all season.

North Broward Prep, which was used to close games in the regional playoffs, as the Eagles won all three by one run, advance to the state final four for the third time in program history and first time since 2014. The Eagles (18-10-1) will take on Dunedin in a 4A state semifinal at CenturyLink Sports Complex in Fort Myers on Monday, May 24 at 7 p.m.

“What a great baseball game tonight on both sides,” said NBP Manager Brian Campbell. “I tip my cap to Mater Lakes, that’s a really good baseball team over there. Talk about a team with some grit and fight and it’s a shame anybody had to lose this game because both teams deserved to win.”

While there were plenty of heroes for the Eagles including starting pitcher and University of Florida commit Yoel Tejeda who was virtually untouchable for six-plus innings, Marsh stood out above them all.

Trailing 1-0 and down to their last three outs going to the last of the seventh, it appeared the Bears were in great shape to punch their ticket to Fort Myers when they loaded the bases with no outs after Carlos Delgado drew a leadoff walk and Nelsido Nunez and Oscar Bello, who were both trying to drop down sacrifice bunts, wound up reaching on perfectly executed base hit bunts. 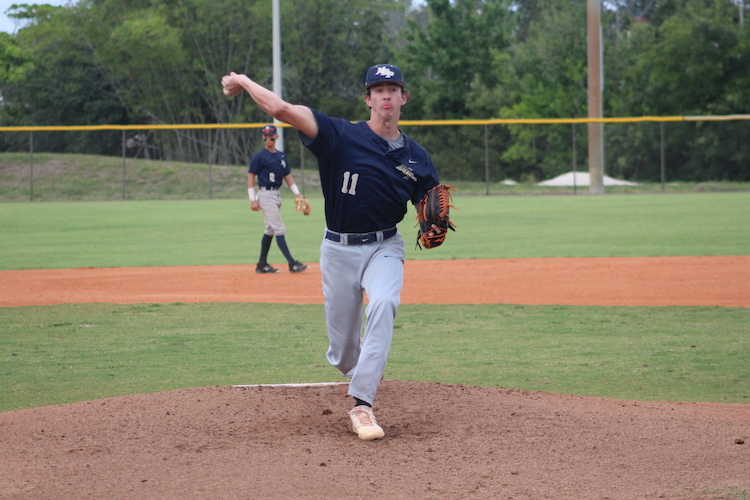 After Shane Huntsberger, who came in for Tejeda once the bases were loaded, struck out Alfonso Gomez, Andy Hernandez, the No. 9 hitter in the lineup stepped up to the plate.

When Hernandez ripped a two-strike pitch into left field, Delgado scored easily and the speedy Nunez was green-lighted around third and was sprinting home with what would’ve been the winning run and sent the Bears to Fort Myers. But Marsh fired a bullet right on the money to Runsdorf who put the tag on Nunez sending things to the eighth.

“I was ready before the pitch and was playing shallow and knew I could trust my arm in that situation,” said Marsh. “A lot of big plays happen during a game like this and this one just happened to be at a key moment. I knew I had it when I let it go. Whatever we have to do to win, that’s what we do. Win at any cost and that’s what it was about tonight.”

When Tejeda singled to right with one out in the top of the eighth and Joshua Steidl then doubled down the right field line, North Broward Prep was primed to break the tie. But Hernandez, who had relieved Mater Lakes starter Andrew Tano (who was nearly as brilliant as Tejeda all night) to start the eighth, got Tyler Richman to pop out to second base for an all-important second out.

After intentionally walking Gian DeCastro to load the bases, Fernandez faced Riley Luft and was one strike away from getting out of the inning when a pitch in the dirt got away from the catcher and pinch runner Wyatt Moss sprinted home with the go-ahead run.

After Huntsberger retired the first two Mater Lakes batters in the bottom of the inning, it was time for one more big play for Marsh. That came when Damian Hernandez ripped a shot down the left field line that had double written all over it. But Marsh managed to reach out and cut the ball off and fire it in quickly to hold Hernandez to a single and keep him out of scoring position. Dayron Ricabal then came up and when he lofted a soft line drive to shortstop, Jonah Diaz squeezed it and the North Broward Prep dogpile ensued.

“The crazy thing is that against Somerset two weeks ago (NBP’s 5-4 regional quarterfinal win) Clancy did the exact same thing,” said Runsdorf whose two-out RBI single in the fourth had been the game’s only run until the seventh. “They had the winning run coming around third and he threw me a strike at the plate. When they got that hit to left, I knew he was going to do it again.”

The manager was certainly not about to argue.

“Clancy’s done a great job for us all year,” said Campbell. “A good arm who attacks the ball well – no fear man, just letting it fly. That’s Clancy and that’s awesome, no two ways around it, he saved the season in that moment.” 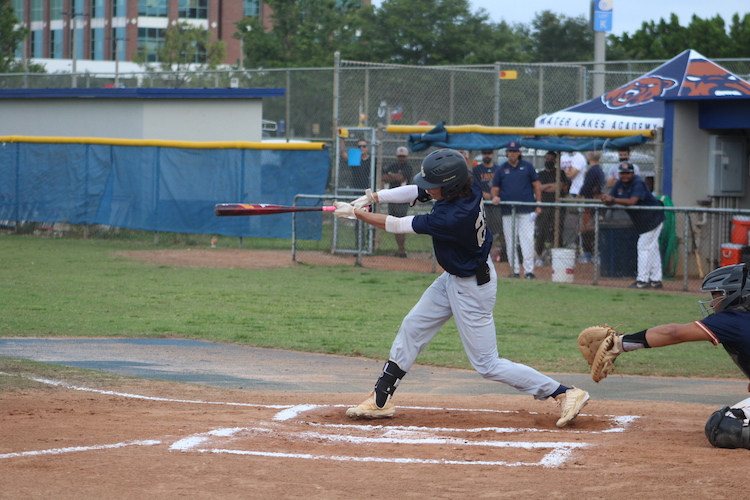 North Broward Prep’s Clancy Marsh leads off the game with a base hit to center.

The toughest job of the night might’ve belonged to Mater Lakes manager Albert Osorio who spent the first five minutes after the game was over trying to pick his distraught players up off the field.

“I’m just so heartbroken for my kids and at the same time so very proud of them for the way they battled tonight,” said Osorio whose team finished 22-8. “They battled right down to the final out and in the end, that’s all I could ask of them. I love these kids.”

Even though they had already made history by making it to their first-ever regional final, Bears players were inconsolable when it was over as a dream trip to state had barely slipped through their hands.

“What an incredible atmosphere tonight with all of these fans and all of this drama, what a privilege to be a part of a game like this. Take your hat off to North Broward Prep. and props to them, they made one more big play than we did and we congratulate them and wish them luck at state. What a great season for us, a historic season where we came within an eyelash of going to state. The best part about that is we have almost all of these kids coming back so while there is disappointment right now, the future down the road is bright.”