North Broward Walks Off Somerset To Advance to Semis 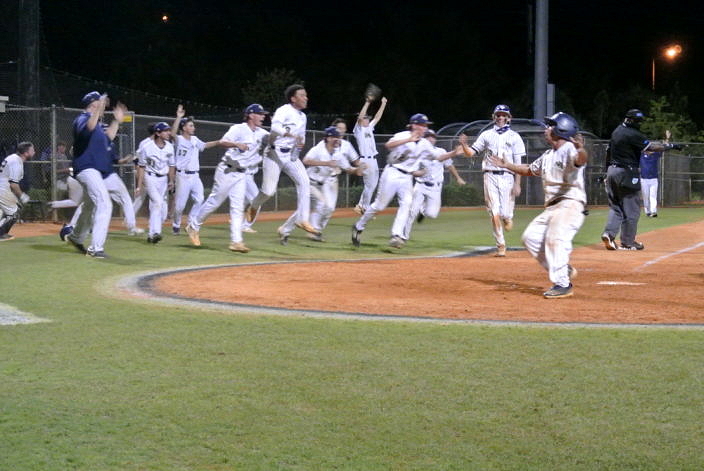 North Broward Prep celebrates as Tyler Richman scores the winning run over Somerset in the bottom of the 9th inning to advance to the Regional Semifinals.

The North Broward Prep Eagles (16-10-1) won a nine-inning dogfight against the Somerset Panthers (13-13) on Wednesday Night in Coconut Creek. The Eagles walked off in extra innings to narrowly advance to the Regional Semifinals 5-4. It an evenly matched prize fight from first pitch to last pitch. The type of game that both teams deserved to win, but in the end the Eagles came out just ahead.

After trading the lead throughout the game, Somerset found themselves down 4-3 going into the 6th inning. The Panthers led off with a double by sophomore Mason Elrod, his third hit of the night. Elrod then scored on a fielder’s choice RBI by Andy Acosta to tie the game at 4-4.

Pitching then dug in for the championship rounds of the fight with Somerset reliever Kendry Mejia and North Broward senior Shane Huntsberger matching one another with clean frames. The tension boiled as it seemed like every time one team threatened to score the other team made a sensational defensive play to end the inning.

Huntsberger praised his team for staying vigilant in the fray.

“I knew the way Somerset was hitting the ball that they weren’t going down easily on strikes alone. I had to trust the seven guys behind me. I had to trust the eleven guys in the dugout and I had to go out and lay it all on the line for them – because it took every single one of us to win this game tonight.” 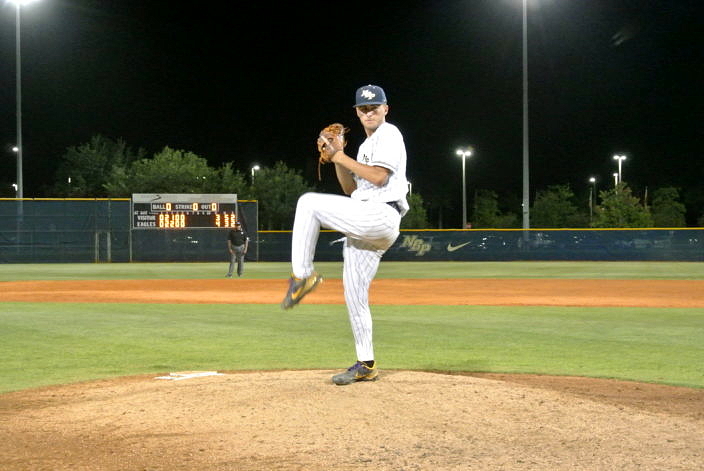 North Broward pitcher Shane Huntsberger was a bulldog in relief for the Eagles, challenging hitters for nearly six innings out of the bullpen and holding the Panthers to only two hits and one run.

In the top half of the ninth, the Eagles were pushed to the brink. The Panthers loaded the bases with one out and were poised to take the lead. Huntsberger bore down to get a crucial strike out, but the five and two thirds innings of heavy work had fatigued him.

North Broward Manager Brian Campbell summoned freshman Riley Luft for the high leverage situation. The freshman rose to the occasion with a strike out that ended the biggest threat of the game and swung momentum back toward the home team.

After four hours of play, the Eagles landed a decisive haymaker in the bottom of the ninth when Tyler Richman clubbed a double to left field to put a runner in scoring position with two outs. Somerset intentionally walked Gian De Castro to create a force out situation for freshman Riley Luft. Once again, the freshman delivered. Luft lifted a 2-0 pitch deep down the left field line and a mile high.

After what felt like an eternity, the ball landed just beyond the outstretched arm of the left fielder and in fair territory. Richman, who sprung into action on contact, scored from second base and leapt into the arms of his teammates who rushed the field as he crossed the plate to put the Eagles into the Regional Semifinals by a score of 5-4.

Luft was unfazed by the pressure of having the game in his hands, twice.

“I was excited to have a chance to win the game. On the mound, I came in and tried to throw strikes. And after that worked out, at the plate I didn’t change my approach. I got ahead with a 2-0 count and looked for a pitch I could put into play.”

The Panthers won the respect of everyone in attendance, leaving everything they had on the field. Senior pitcher Kendry Mejia led his division with a .47 ERA and muted the Eagles lineup for nearly four innings with a two-hit shutout effort.

Offensively, the Panthers were led by Brock McCollough (who made a game saving catch in deep center in extra innings), Alex Servilla and Mason Elrod. However, their biggest admirer in attendance may have their own manager, Arby Sosa. 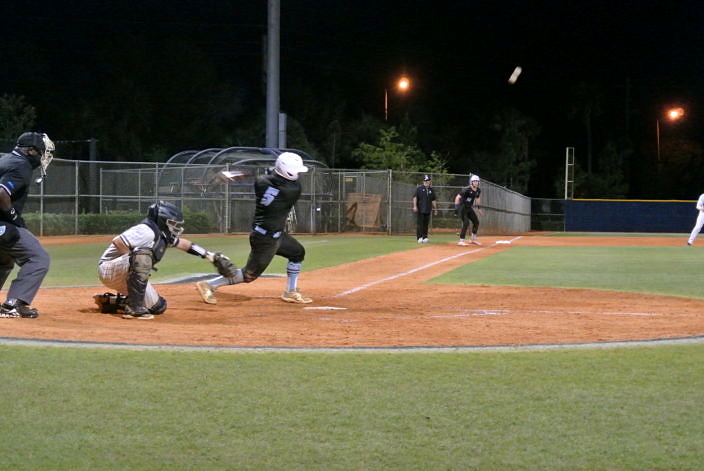 Somerset senior Andy Acosta chops a hard ground ball to short that scored the tying run late in the game against the Eagles.

“We played a great team that played hard. I’m very proud of our guys,” said Sosa. “This district is a gauntlet, so to advance to here from that group, you really have to earn it. We came up a little short but we battled.”

North Broward Prep Manager Brian Campbell was exhausted from the extra inning effort but praised the Panthers’ effort and ability.

“I’m tired and I know our guys are tired,” Campbell said. “That was a heck of a battle. Somerset does everything the right way. It’s a tough game every time we play them. I hated to see anybody lose the game tonight. Fortunately, we came out on the winning end. But Somerset and Coach Sosa have all my respect. That’s a great team over there.”

North Broward Prep will face the winner of the Regional Quarterfinal matchup between American Heritage Plantation (16-5) and Jensen Beach (15-7).