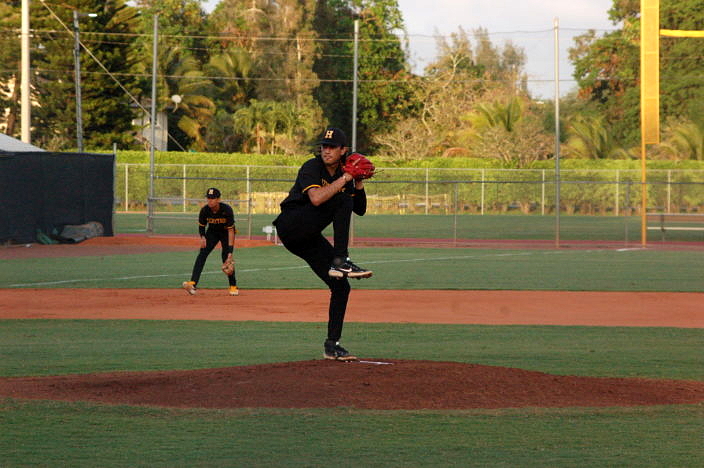 Left-hander Brandon Barriera gets the start for American Heritage.

The #1 and #3 teams in the HSBN Broward Power Rankings squared off on Tuesday night when #1 Taravella traveled to face #3 American Heritage. Timely errors cost the Trojans (9-2) what would have been their tenth win of the season.

The Trojans had the Patriots down to their last strike, but a routine ground ball to second base skipped through and extended the inning. That brought the Patriots’ clean-up hitter Erik Blair to the plate with men on first and third and a chance to win the ball game. A wild pitch scored the man on third, Spencer Butt, tying things up at four runs apiece. Taravella opted to intentionally walk Blair, and then did the same with Luis Ramirez after a passed ball moved the runners over.

That’s when Andrew Ortiz sent a ball to deep right-center. It wasn’t leaving the yard and seemed manageable, but the center fielder lost his footing as he bobbled the fly ball. The celebration had begun in Plantation as the Patriots claimed victory over one of the best teams in the county, 5-4.

“The last two weeks, we’ve been playing come-from-behind baseball and winning in the seventh or eighth inning,” Patriots manager Mike Macey said. “So, getting down a run when we did, nobody ever thought we were out of it. Our guys had bought into the seventh inning. You’ve got to play 21 outs against us to beat us.”

Taravella’s night was marred by sloppy pitching and defense in the first and last innings. Trojans manager Joe Giummule will be the first to admit that his team makes those plays more often than not, but Tuesday’s uncharacteristic miscues ended up being fatal. 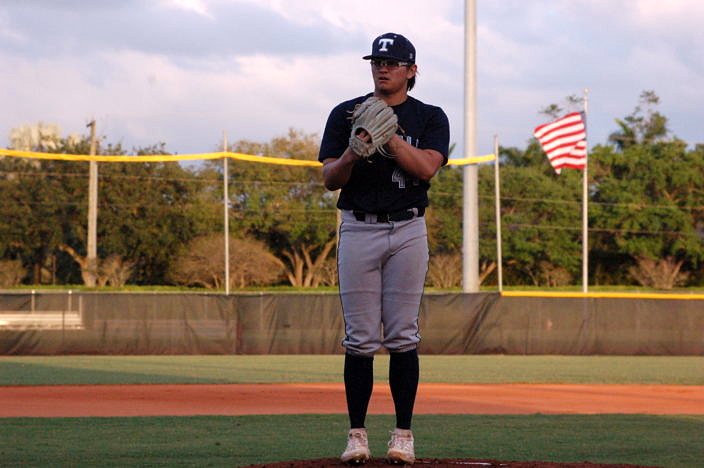 Miami commit Christopher Scinta on the mound for Taravella.

Both teams threw their top guys, and there was plenty of college-level play on display throughout the evening. Left-hander Brandon Barriera, a Vanderbilt commit who has major-league scouts in attendance often, got the start for Heritage. He struck out nine in five innings of work while giving up four unearned runs.

“Honestly, I was just working my pitches today,” Barriera said when asked if he tried anything special against Heritage. “All four pitches, I was just trying to throw them for strikes. Get outs and pitch to as much contact as I can.”

Miami commit Christopher Scinta was on the bump for the Trojans, and he settled in quite nicely after a rocky first inning.

“(Scinta) was a bulldog and locked in after we gave him the three-spot in the first inning,” Giummule said. “The wheels just came off and a lot of guys would have just packed it in, but he fought through it and was exceptional for the next three innings.”

Scinta surrendered just two singles after the first inning and was in line to get the win after Vincent Samuel knocked in a run to make the game 4-3 in the top of the fifth. Of course, the seventh inning went the way that it did, but things did seem bleak for Heritage as the night carried on.

“We had any idea of what we wanted to do against their kid, and we know he’s good,” Macey said of his team’s approach against Scinta. “Our at-bats later in the game got worse and he made better pitches. He got better as the night went on, and we got worse as the game went on. I have to give him credit.”

The Patriots surround Andrew Ortiz behind second base after the walk-off win.

Taravella entered the week ranked No. 1 in the Broward HSBN Power Rankings and Heritage came in at No. 3 in the county. There’s no doubt that these are two of the top programs in the region, and getting the win in a game like this can be a real confidence boost for a team.

“(Taravella) is going to be in it at the end, so it’s good to beat a quality, quality team that we know is going to make a run,” Macey said. “You beat one of the top arms in the state or county. It’s good to get a win like that against a really good team.”

For the losing team, a close loss to a worthy foe can be viewed as a learning opportunity, especially when the important games come later on in the year.

“If I cared about rankings and winning percentage and things like that, I wouldn’t be coming to Heritage on a Tuesday night,” Giummule said. “I wouldn’t have gone to Archbishop McCarthy or St. Thomas on a Friday or played in the HSBN First Pitch Tournament. We’re playing all the best teams in South Florida so we are prepared for when it matters down the stretch. This was just another preparation. The season starts in the district tournament. Everything up until then is preseason as far as I’m concerned.”

The Trojans will have a week to stew on this loss before hosting Wellington on March 30. A betting man would take the under on errors for the rest of the season as Taravella is likely to remember exactly how they lost this game.