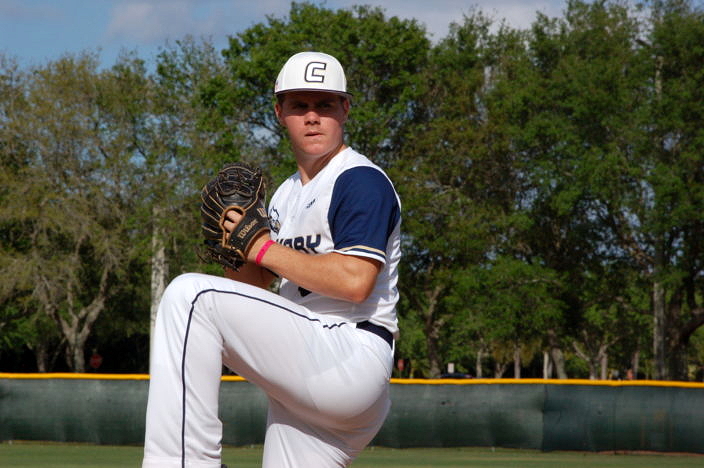 Calvary Christian’s Franco Ruocco takes over in the third inning for the Eagles.

A pair of towering home runs to right field lifted Calvary Christian Academy (2-5) to a much-needed victory on Monday against Jupiter Christian (2-4).

The first came courtesy of first baseman Braden Rosenthal with two men on base. Calvary hit the ball well in the first few innings but every line drive was hit right at a glove. It was only a matter of time until something got through, and that break came in the bottom of the third just after Jupiter scored its only run of the game. An Aaron Vetter bunt to third base extended what would have been a 1-2-3 inning for Jupiter’s starter Brandon Roberts and opened up the door for a perfectly timed hit and run. Vetter drew the second baseman to the bag and Thomas Baxter found the hole in the right side of the infield to set up Rosenthal’s bomb over the scoreboard.

“When a team scores, they want to put a zero up on the scoreboard the next half inning,” Calvary manager Wayne Rosenthal said. “That’s how you get the momentum. They scored a run and then we came back and countered with three. So, once that happens, it’s almost like the sails were taken from them and started boosting us. It gave us some confidence and told us that we could do this. The team responded after that with a few more hits and the next bomb really boosted everyone again. Hopefully, this game will catapult us to future competitive games, win or lose.”

That second homer Rosenthal referenced was hit by A.J. Perry in almost the same spot as the first one. By that point, the score had ballooned to 7-1 and Calvary was well on its way to an 8-1 victory. That was more than enough run insurance for junior right-hander Franco Ruocco, who normally starts the game but came out in relief on Monday. Command issues have plagued Ruocco in recent starts, so Rosenthal wanted to give him a chance to work things out without the pressure of a start. That also allowed for the Calvary to test out Patrick Sullivan as a starter, but the experiment was short-lived.

Sullivan was pulled after surrendering five walks in one inning of work. Noah Diehl came in and worked his way out of an early bases-loaded jam in the second with three strikeouts. Whatever command issues Ruocco had in the past didn’t show in this one. He struck out four and gave up just one earned run on three hits and a walk through five innings of work.

“I looked at Franco after the sixth inning and told him how confident he looked on the mound,” Rosenthal said. “I told him I was proud of him today. He did a great job.” 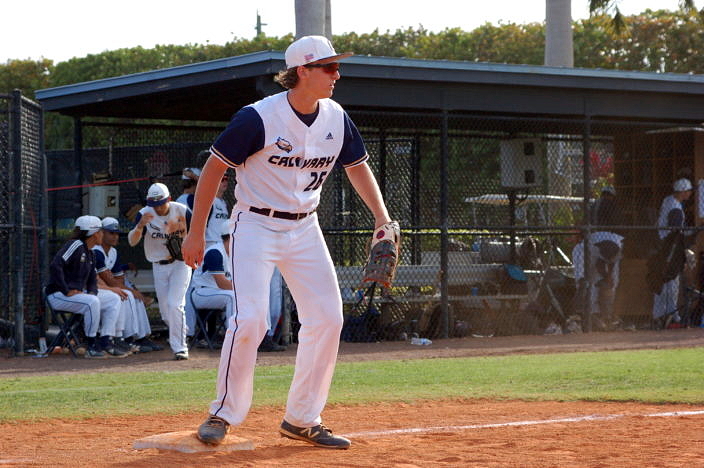 This may be Calvary’s second win of the season, but they play better than most two-win ball clubs in the county. Close losses have hurt the overall record but Rosenthal knows the wins will come as the team continues to compete.

“We’ve had a lot of one-run losses,” Rosenthal said. “I look at those games and think we should have won three of them, but that’s what baseball is. You never know until the last out is made. I’m just trying to show these guys that no matter what the win-loss is you have to keep fighting and things will turn around. It’s not about how you start the season, it’s about how you finish.”

The junior Rosenthal shared his father’s optimism after hitting his first dinger of the season.

“The mindset going forward is to keep it up,” Braden said. “We played good against Plantation last week, and we just need to keep playing as a team and piling on runs. We’re going to try and go as far as we possibly can. If that’s states, then it’s states. If that means district championship, that’s fine too.”

On the other side of the diamond, Jupiter Christian manager Ray White saw plenty of room for improvement in his ball club.

White is referring to Jupiter’s nine strikeouts on the afternoon, many of which came with a runner on base. Chasing balls out of the zone was a problem for Jupiter, and it’s something the team plans on practicing in the coming weeks. Despite the poor outing, White is confident that his team will turn things around.

“Yeah,” he said with confidence when asked if Jupiter would bounce back in the two remaining games left this week. “We’ve got a good team. We’re a young team, and I can put myself in their shoes and understand trying to do too much to impress the coaches. They’re taking the information that we give to them and trying to apply it. Sometimes, there’s a winner and there’s a loser, and today we just fell short. It was a good game overall.” 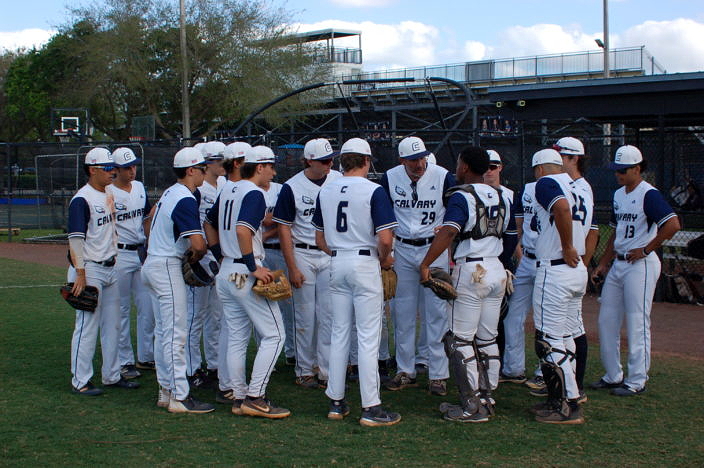 Head coach Wayne Rosenthal speaks to his team in the early innings of the ball game.

In fairness, this was the first game Jupiter Christian has played in nearly two weeks. Roberts, who pitched 3 2/3 innings as the starter, knew going into the game that it wouldn’t be business as usual for the team.

“Definitely odd,” Roberts said when asked about the time off. “It’s been a while since we last played. I know I felt it. Our last practice on Thursday was a scrimmage and I think we all kind of sense that this one might be a struggle of a comeback game.”

So, how does Jupiter Christian move on from this lopsided loss? It’s pretty simple, according to third baseman Jack Weisman.

“I think we just need to forget about this one,” Weisman said. “We shouldn’t have any trouble doing that because it’s a quick turnaround against Dwyer tomorrow. Practice, work hard, forget about and just keep going.”

Dwyer is coming off a 2-2 performance at the HSBN/Hofball March Madness Classic, but they aren’t a team to be taken lightly. After Tuesday’s contest, Jupiter Christian will have a few days to work on some of the aforementioned issues before facing Oxbridge Acadamy in the home opener on Friday.