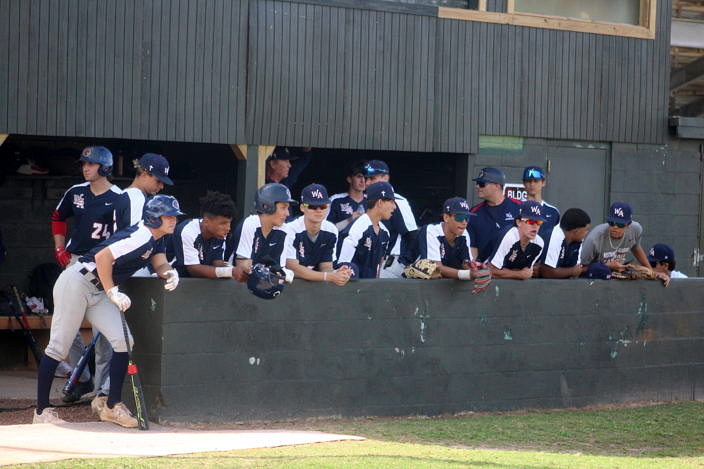 There were plenty of heroes to go around on both sides when Westminster Academy and South Broward squared off on Monday.

But in the end, only one team could win and it turned out to be Westminster as the Lions pulled out a thrilling and dramatic 5-4 extra inning victory at South Broward High School in a game that began late in the afternoon and went well into the early evening hours.

The Lions plated what turned out to be the winning run with two outs in the top of the eighth when, with Alex Basto on second base, Sanders Chartier lined a shot to shortstop that got underneath the shortstop’s glove and into left field scoring Basto.

Freshman Frankie Russo, the team’s closer who had entered the game in the bottom of the seventh with a one run lead only to give up a run on a two-out wild pitch allowing the Bulldogs to tie it, managed to record all three outs in the eighth to record the win and move his record to 4-0.

He did so with the tying run just 90 feet away in the form of Lucas Scineca when he got leadoff hitter Luke Valenchis to fly out to deep right to end the game.

“We battled, battled and battled today. That’s been the story of our season so far,” said WA manager Ernie Gonzalez who saw his team improve to 7-4 and now have won six of their last seven games after a 1-3 start.

But Gonzalez knew darn well his team would’ve been 6-5 had it not been for the dramatic late-game heroics of junior Landon Petrisko.

South Broward was literally one out away from recording what would’ve been a nice 3-1 victory thanks to a brilliant pitching performance by starter Johnny Luechauer.

Luechauer went six innings and turned in a Houdini-like performance as he worked his way out of three different jams (two of them bases loaded) along the way before giving way to closer Sean Burke to finish things out.

When Burke struck out the first two batters in the inning, Bulldog players were on the edge of the dugout ready to hit the field and celebrate victory. 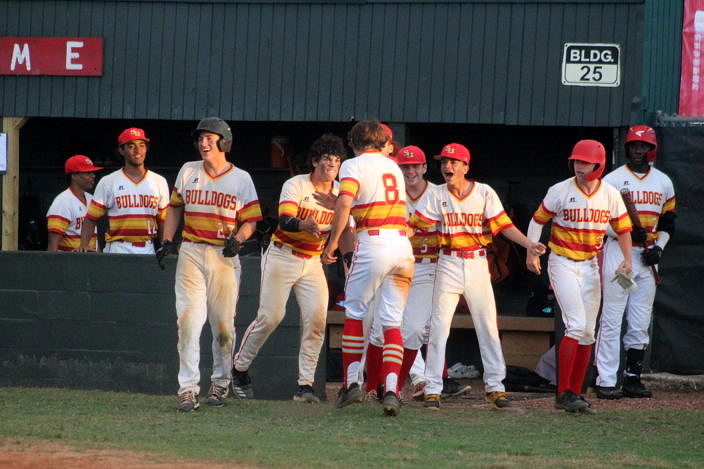 Luke Valenchis is greeted by his excited South Broward teammates after scoring to tie the game with two outs in the last of the seventh.

But, after Chartier singled to right to keep things alive for the Lions, Petrisko stepped up to the plate and crushed a 2-1 fast ball deep to left. Even though the wind was blowing in, the ball barely cleared the fence tying the game at 3-3.

“I was looking a fast ball and got one up and I put a good swing on it,” said Petrisko. “As soon as I hit it, I knew I had gotten it good but I also knew the wind was blowing in so wasn’t sure if it would clear the fence and I really had to hall tail to make sure I at least got to second because I knew I was the tying run. I didn’t even see it clear the fence, I just heard my teammates yelling from the dugout. Then I knew. What a feeling.”

Indeed as that’s two games in a row Petrisko has been clutch for his team. Last week he came through with a two-out, two-strike walk-off RBI single in the last of the seventh to give his team a 3-2 win over Sagemont.

“Unbelievable. Landon does it last week and then goes out today and does it again,” said Gonzalez. “The young man is a phenom, a physical specimen. He throws high 80s, maybe 90 on the hill (Petrisko pitches when he’s not playing outfield) and can swing the bat as he showed today. A really clutch performance.”

After Petrisko tied it, Adrian Sosa reached when he got hit by a pitch, stole second and then scored on a Michael Thomas base hit up the middle putting the Lions up 4-3 and sending their dugout into a frenzy.

But that excitement was tempered when South Broward (4-5) put on a rally of its own in the bottom half of the inning.

After Valenchis drew a leadoff walk and advanced to second on a sacrifice bunt and third on a groundout to second, the tying run was 90 feet away with two outs. That’s when Russo’s first pitch to Shawn Shapiro went to the backstop allowing Valenchis to hustle home to tie the game at 4-4.

“The seventh inning was tough,” said Russo. “I felt like I had let my teammates down but when that happens, you have to learn to have a short memory, put it behind you and keep moving forward. It just shows you that you have to stay confident in yourself and that’s what I did.” 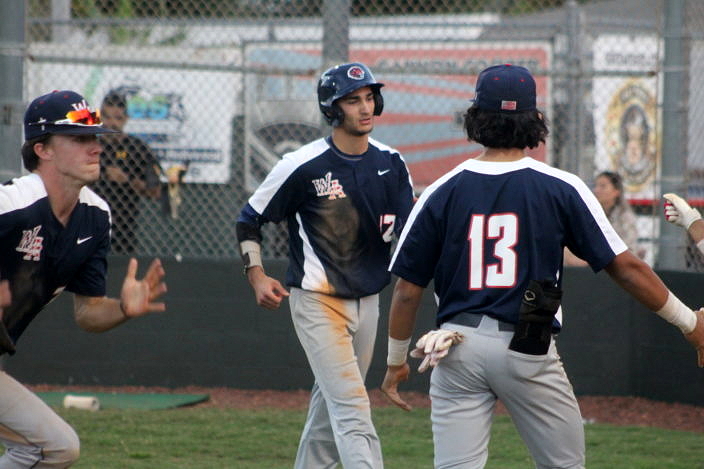 Alex Basto is greeted by his Westminster Academy teammates after scoring what turned out to be the game-winning run in the top of the eighth.

The loss was devastating to the Bulldogs who, while committing half a dozen errors in the field also had a pair of tremendous diving catches for inning-end outs in center field (Scineca) and left (Shapiro) and have now alternated wins and losses over their first nine games.

“This one hurts for sure,” said South Broward manager Darin Koch. “You’re up 3-1 with two outs in the last inning and don’t get it done. Give Westminster credit and their kid credit though. He barreled up the ball and made a great swing on it to hit it out. But I give my kids credit as well for battling back and tying it back up. I told them I was proud of them for competing but…..at the same time, you can’t make six errors in a baseball game and expect to win. That’s not how it works. There’s a lot of season ahead and we’ll get back out on the field tomorrow and keep going.”