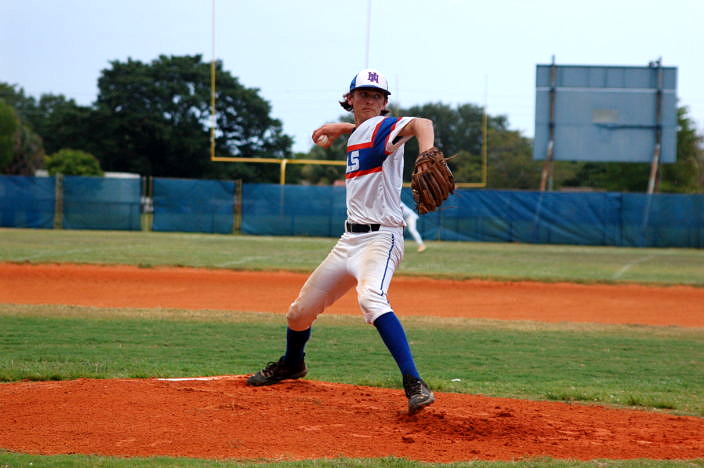 Freshman Kaleb Kerrigan strikes out 12 in a five-inning shutout of Northeast.

The Hollywood Hills Spartans (8-9) closed out the regular season with a 10-0 victory over the Northeast Hurricanes (3-7) on Thursday night.

Hills seniors Juan Arias, Bryan Christomo, Diego Leal and Adam Liotta were honored before the game in their final regular-season home game. The Spartans are a relatively young team that’s been carried by several freshmen, especially on the mound. That was evident in Thursday’s win as Kaleb Kerrigan struck out 12 over five scoreless innings.

“One thing we’ve had all year is pitching,” said Spartans manager Antonino Schembari. “Every single game they give us a shot. The defense doesn’t always necessarily pick it up on the backend but they will always give us a shot up there. We’ve got three freshmen that have carried the staff this year and I could not be more proud of them. If they come out and do what they’re supposed to do, I feel good against anybody.”

Not only did Hills’ pitching hold up against Northeast, but the offense also joined in on the fun. The Spartans sent the crowd home happy and early satisfying the run rule in five innings. 10 runs were scored in total on eight hits. Schembari is hoping that this is the kind of win that can get his team ready for the district playoffs that begin next week.

“We know our pitching is going to give us a chance every single night that we go out,” he said. The defense just has to play well behind them and come up big in situations. Playing a game like this, especially leading into the playoffs, was a huge morale booster. They see what it’s like to win a baseball game and feel it and don’t want to do anything but that. So, I think if they can just ride this wave, we’ll find some success out there in districts.” 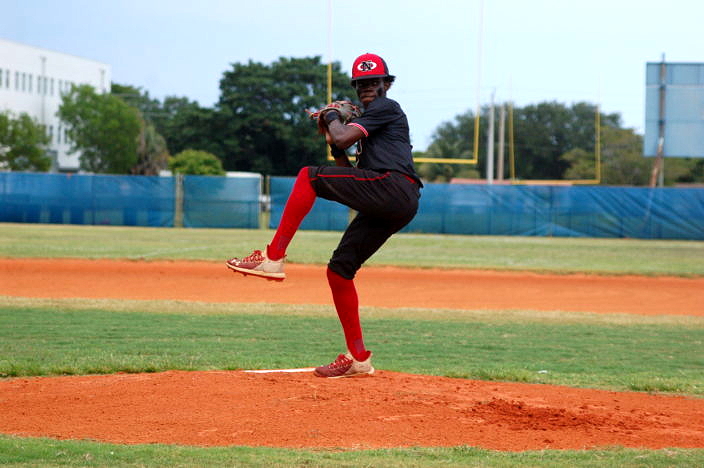 Nicholas Mendez gets the start for Northeast against Hollywood Hills.

Both schools are in the 5A District 15, which features South Florida titans Archibishop McCarthy (14-10) and American Heritage Plantation (22-1). The Spartans are set to face the Coconut Creek Cougars (3-11) on Monday in the first round of the district tournament before taking on Archbishop in round two. The Hurricanes have the Stranahan Mighty Dragons (2-10) and Heritage ahead. It’ll be tough for either club to make it past that semifinal round, but it’s a good experience for a very young group.

Schembari is proud of what his team accomplished, which is the best season in program history in nearly a decade—the 2013 team finished 10-11. It’s only up from here for the Spartans.

“High school varsity baseball is all about experience,” he said. “Knowing what to do in what situation, knowing what is expected of you when you got out and play on the field, so I think just to see all these young guys compete at the level that they have tells the story right there. In our starting nine we have six freshmen. For them to carry the weight for three months of the year, this should show them and everybody that we’ve got a group that’s here to play ball. Give us a year or two, maybe even this year, and we’re going to be very competitive.” 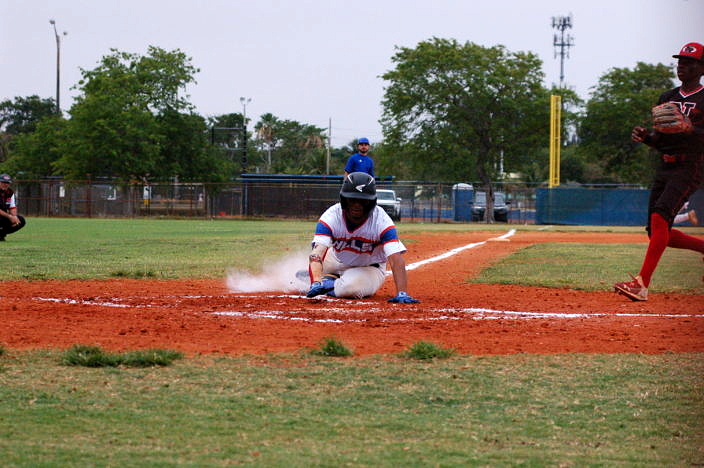 Ramon Cepeda slides into home to put the Spartans up 3-0 in the second inning.

For Northeast, the 10-run loss isn’t anything new, but this was an important game to get in so that the team could qualify for the playoffs. The Hurricanes have had several rainouts and postponements that put them in danger of missing the 10-game mark required to enter districts. As luck would have it, rain threatened this game and even caused a few errors throughout.

“At this point, it wasn’t so much about the victory as it was about making sure we got that 10th game in to qualify for districts,” Hurricanes manager Mike Goulette said. “We thought it was going to get rained out, so we played according to that. Once we made all those errors and the game was out of reach, it was just about making sure the rain didn’t stop us and prevent us from qualifying.”

Goulette is moving on from the program following the season’s conclusion but he knows that seeing the district’s elite will be good for the returning players. That means they have to get the job done against Stranahan on Monday, though.