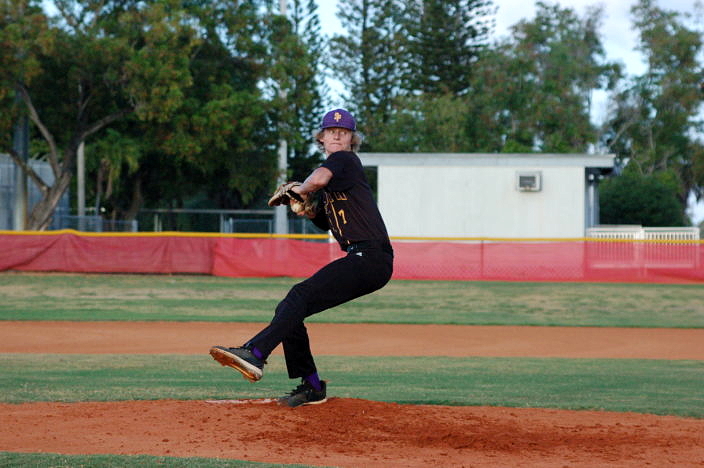 FGCU commit Justin Henschel struck out seven in four shutout innings for the Paladins on Monday.

The South Plantation Paladins (16-5) haven’t finished a season with a winning record since HSBN started covering the program back in 2011, but the 2022 team is about to change all of that.

The Paladins cruised to a 16-0 victory over the Deerfield Beach Bucks (12-7) on Monday night, and it’s hard not to notice just how different this team is from those in years past. There’s plenty of offense up and down the order and a legitimate ace in FGCU commit Justin Henschel to lead them through the tough games. He picked up his fourth win of the season on Monday and added seven strikeouts to his district-leading total (56).

Speaking of the district, South Plantation sits atop 6A District 14, which includes the likes of Broward No. 6 St. Thomas Aquinas (16-6). It’s not lost on Paladins manager Trevor Chang-Leung that his team has a chance to enter the district tournament with the top seed, and the greatest challenge is getting his club to stay focused as the most important leg of the year approaches.

“We had a great morning with seven kids signing their college letters of intent,” Chang-Leung said following the win. “Heading towards districts, we wanted to just keep everyone up and we got a chance to get everybody in the game tonight. We had our horse on the mound to start things off and he was a little rusty, but it was enough. It’s just about keeping them focused and motivated heading into district week.” 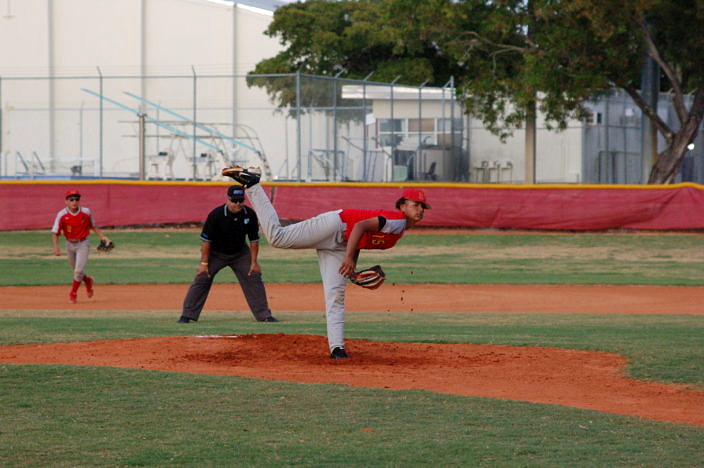 David Davila gets the start for Deerfield Beach against South Plantation.

Offensively, there was no lack of motivation on Monday night. The Paladins were coming off a close 2-1 win over the Fort Lauderdale Flying L’s (8-10) and needed to reaffirm their offensive prowess. Third baseman Jacobi James got things going right away with a two-run double in the first that kickstarted a five-run inning for South Plantation. Left fielder Justin Baranski lead the offense with a 4-for-4 night, three runs and three RBIs. The early lead ballooned into an insurmountable one in the third and Chang-Leung opted to send in some of his reserves to keep everyone healthy for the playoffs. A handful of runs in the sixth put the run rule into effect and the game came to an end early after a quiet bottom half of the inning.

Although it’s a nice win for the Paladins, Chang-Leung is hopeful that the team isn’t too forgetful of the struggles they had against a team with a worse record just days earlier. Complacency can be a killer for good teams this late in the season and one mistake can mean the end of a historic run. South Plantation has one more regular-season game on Friday at home against Coral Springs (8-11) and then it’s time for districts.

“I don’t take anyone in our division lightly,” he said. “I’ve been doing this too long and this division beats up on each other. Fort Lauderdale has always done that to us. Obviously, St. Thomas is always good, and you can’t take Nova lightly. You’d like it to be a closer game with that in mind, but you can’t complain about a lopsided win.”

On the other side of the diamond, Bucks manager Drew Phillips is hoping his club can have a short memory after an ugly loss. Broward No. 4 Taravella and McArthur are still on the schedule for Tuesday and Thursday, respectively, so there’s little time to sulk in defeat.

Jacobi James gets the scoring started for South Plantation with a two-run double in the first inning.

The good news is that Phillips should have someone a bit more experienced on the mound over the final two games of the regular season. Sophomore David Davila got the start on Monday as the skipper looked to save some of his more trusted pitchers for later in the week. Despite the poor results, Phillips was able to find a few positives from the night and can at least rest assured that his ace will be ready for the playoffs.

“We just don’t have a lot of pitching depth,” Phillips said. “We’re a very young team. That was (Davila’s) first-ever varsity start and I thought the freshman (Bryan Maldonado) did well. After it got out of hand, we just had to throw people out there because we have Taravella and McArthur later this week. Our best pitcher isn’t even going to throw this week and we have this crazy schedule in front of us.”

Unfortunately for the Bucks, things won’t get much easier after the busy week concludes. Deerfield is in one of the toughest districts in South Florida with state powerhouse Douglas (21-2) at the top and Taravella close behind. It will almost certainly boil down to those two teams, but a third-place finish seems realistic for the Bucks if all goes well.

“Hopefully, we’re going to be healthy and play our best baseball,” he said. “Just give us a chance. It looks like we’ll see Coral Glades first and we’ll try to play our best game before moving on to big, bad Douglas.”