Spencer Butt celebrates at second base after driving in the go-ahead run in the bottom of the sixth inning.

The American Heritage Patriots have made a habit of relying on late-game heroics to win big games this season and that story repeated itself once again on Thursday night against the Ft. Myers  Green Wave in a 4-3 regional semifinal win.

Runs were hard to come by all night, but junior shortstop Spencer Butt, a Florida State commit, came through in the bottom of the sixth inning for the Patriots with a go-ahead double that scored right fielder Zain Diaco. First baseman Erik Blair and catcher Mateo Serna both singled a home a run to make it 4-1, and Heritage would need each of those runs to hold onto the win in the top of the seventh.

Butt came in to pitch the seventh inning and ran into trouble immediately giving up a pair of walks and a single to start the inning. With a three-run lead, there was room to trade runs for outs, but the Green Wave wasn’t going down without a fight. Butt got his first out of the inning via the strikeout and then walked the next batter to give up a free run. Madrid Tucker singled in a run to bring Ft. Myers within one and Patriots manager Mike Macey got the bullpen going. While it makes sense to have a backup in case things go completely wrong, Macey had complete faith in Butt to close things out.

Butt responded by inducing a pop-up that finally was ruled an infield fly as it came down in second baseman Marc Nellis’ glove for out two. Justin Christensen struck out for the final out of the ballgame and the celebration began in Plantation. 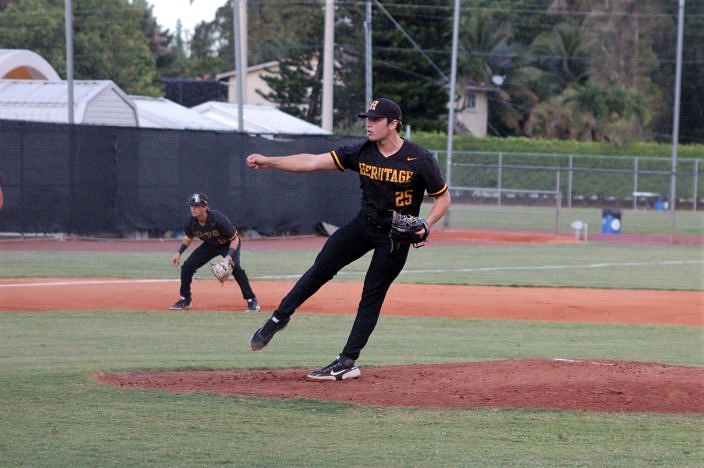 Winning the battle of attrition is Heritage’s modus operandi and Butt said that the team never really doubted their chances of pulling ahead late in the game. Everyone in the ballpark could see that Green Wave starter and Eastern Carolina commit Zachary Root was going to make it tough as long as he was on the mound, but things got a little easier after Ft. Myers turned to the bullpen.

“Our motto is if we get to the bullpen, no matter who it is, we’re going to win the game,” Butt said. “I think we knocked that guy out in 110 pitches and, once we got there, we knew we had it. We were confident and we stayed level-headed throughout the whole game. That’s our thing.”

Macey wasn’t as keen on claiming that mindset as the team motto, but there was a feeling that the tide would turn in Heritage’s favor the later the game stayed deadlocked.

“I don’t know that our motto is to get to the bullpen, but we just don’t quit,” Macey said. “We don’t quit and it’s been all year long we’ve played 21 outs. We’ve been out, we’ve been down, but we come back and fight, claw and scrap our way back into it. You get backed into a corner, you punch your way out and come back and win. It’s a good team that’s fun to be around. They just don’t stop.”

Of course, the late heroics can’t come if the game doesn’t stay close and Heritage has starter Brandon Gonsalves to thank for that. He pitched four innings of three-hit, one-run ball, and that lone run came on a balk. Evan Dobias was sharp in relief and Butt made the save. Both sides struggled with walks throughout the night, but that was mostly due to a tight strike zone rather than command issues. Center fielder Ray Bermudez also deserves some credit for getting the Patriots out to an early lead in the first with a solo homer before things were tied. 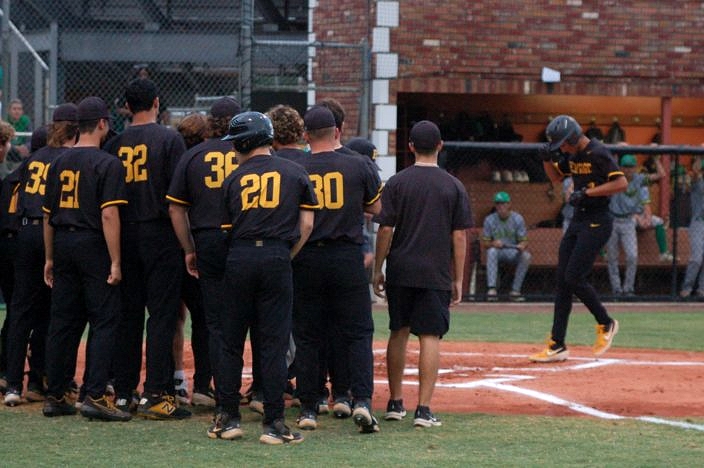 Center fielder Ray Bermudez is greeted at the plate after a solo shot in the first.

For Ft. Myers, it’s a tough loss to swallow considering the runners left in scoring position in the final inning. It was anyone’s ballgame to take, but the little things didn’t click until it was too late.

“First off, Zach Root pitched a helluva game,” Gree Wave manager Kyle Burchfield said. “He battled all the way until we had no choice. We had to take him out because of the pitch count, but he came up in big situations for us all night striking out guys in key moments. Our guys never gave up. It’s just really unfortunate for our guys. We didn’t execute a few key small plays — couldn’t get bunts down, made some errors in the field that ended up ultimately being the game.”

Burchfield has done wonders for the program since taking over following the 2019 season. Fort Myers has made the regional tournament in each of the past two seasons and produced next-level talent along the way. In addition to Root playing at ECU next year, senior shortstop Jake D’Altrui will continue his playing career at Flagler. It’s not the finish the team hoped for, but there’s still plenty to be proud of and perhaps even more to look forward to.

“We had 10 seniors this year, so it was a pretty big class for us,” he said. “Thankfully, we do have some really talented freshmen that we’ve brought up and a couple of good sophomores as well. We definitely do have a future to return and make a playoff run in the next couple of years, so it’s not just a one-and-done for us.”

Heritage moves on to the regional finals against Naples on Monday.