Cardinal Gibbons Advances To 4A-14 Finals 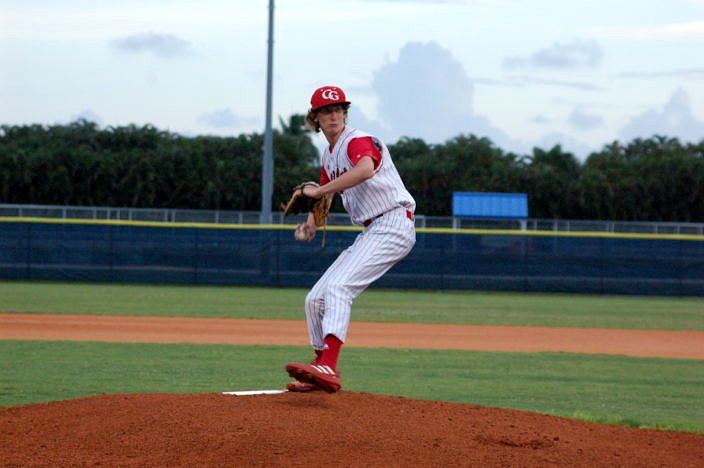 Michael Kass gets the start for Cardinal Gibbons in the district semi-final against Somerset.

The Cardinal Gibbons Chiefs and the American Heritage Stallions will clash in the 4A-14 district final on Thursday following respective wins over the Pompano Beach Golden Tornadoes and Somerset Academy Panthers on Tuesday.

The Stallions are hosting the tournament but will be the away team in the district championship just as they were in Tuesday’s 7-0 win over Pompano. Designated hitter Cole Stefano got things going with a bases-clearing double in the first inning and starting pitcher Dane Rossi brought him in with a single to left field. That early 4-0 lead would be enough for Rossi to work with on the mound as he kept the Golden Tornadoes hitless through four innings.

Rossi ran into his first bit of trouble in the fifth with the bases loaded and no outs on the board. He reached back and got two of his four strikeouts on the evening and got out of the innings unscathed with a fly out to right. He’d last one more inning and give way to Blaise Boisseau for the seventh. Despite the dominant performance, Rossi will be the first to say he didn’t have his best stuff today. But he did what good pitchers do in big games when something isn’t going their way: he adjusted.

“Honestly, it wasn’t really my best day, but I worked through the tough feelings,” Rossi said. “My arm didn’t hurt, but there were some tough innings that I just had to do my best and hope I got through it. I think my curveball (was off), so I just relied on my fastball a lot.”

“We trust him, so that’s the big thing,” Mazza said. “So when he doesn’t have his best stuff, we know we’re going to get his heart. He didn’t have a great breaking ball today or a great changeup today but he made pitches when he had to. And in that one inning where he ran into a little trouble, he got out of it. His pitch count got up so that’s why he went six for us, but he gave us what we needed.” 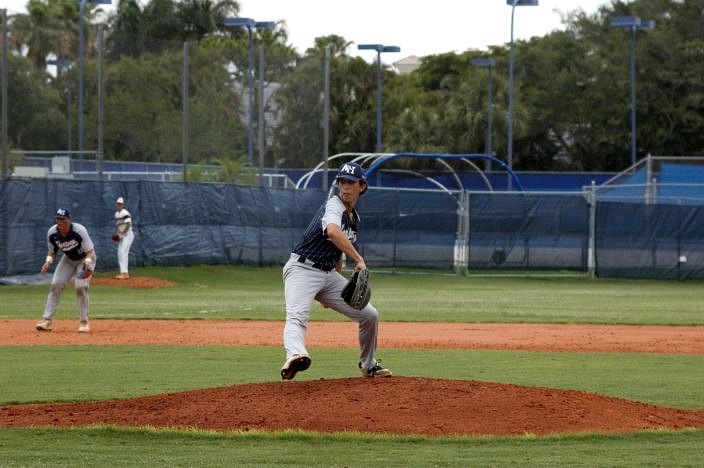 Dane Rossi goes six strong innings for the American Heritage Stallions in the first semi-final of the day against Pompano Beach.

Even with a decisive win, Mazza sees room for improvement for his club. Over a dozen men were left on base after the first inning, including a couple of bases-loaded situations that resulted in nothing for the Stallions. With one day to prepare for Cardinal Gibbons, Heritage will look to address that problem quickly.

“Yeah, I thought we were flat,” Mazza said when asked if he wanted more from his team on Tuesday. “We’ve been coming out pretty sharp and I just thought we could have taken care of business. We left a lot of guys on base.”

At the time of the victory, Mazza didn’t know which team his club would face in the championship. A strong regular-season schedule has helped prepare the Stallions for the rigors of the playoffs, though, and the head coach likes his team’s chances against anyone. Watching the back half of the double-header for intel might be of some help as well.

“We play a tough schedule for a reason,” he said. “We look at that as a plus for us so we can be ready for games like this… We’ve played both teams (Gibbons and Somerset) and they’re both very good. We’re going to be here tonight trying to find out anything we can.”

What Heritage found out is that Cardinal Gibbons isn’t the No. 1 seed in the district on accident. The Chiefs can pitch, the Chiefs can hit and the Chiefs can play some incredible defense, especially in the outfield. All three phases of the game were on display in the 6-1 win.

As senior-laden as the Chiefs roster is, it was sophomore Michael Kass who got the start against Somerset. Similar to Rossi, Kass said he struggled through the first few innings. He said that nerves played a factor early, but catcher Trent Shields and shortstop Aidan Hernandez helped him to settle his nerves during the inning.

Kass finished the day after 5 2/3 innings striking out six and allowing just one run on five hits. He got plenty of help from his defense including two remarkable outfield assists. The first came from centerfielder Brice Montiel in the third to stop Somerset’s Chris Leon from scoring his team’s first run of the day. Kass ran into a little bit of trouble again in the sixth and Tugg Hollandsworth bailed him out with a rocket from right field to third base to complete a double play.

“I have no problem throwing it in the zone,” Kass said. “I know every single one of those guys behind me will back me up if it goes their way.” 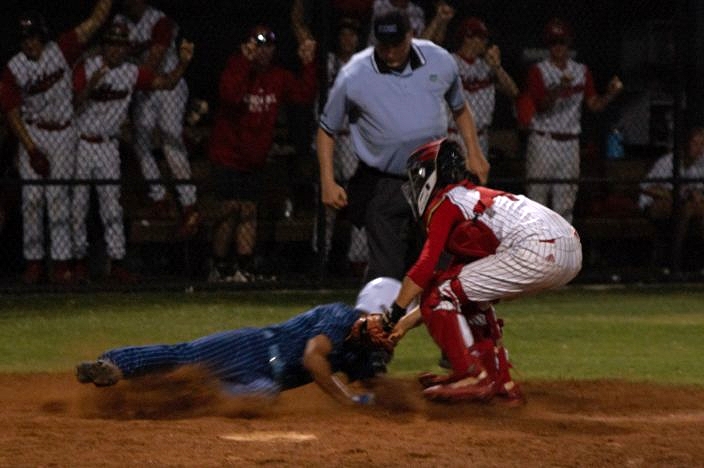 Catcher Trent Shields tags out Somerset’s Chris Leon at the plate in the third inning.

The Panthers did manage to score a run in the inning though, forcing the switch from Kass to Cole Cozzolino on the mound. Cozzolino took care of business with little resistance in the seventh.

The Chiefs did come out of the gate a bit slow offensively, but they put several balls in play which tends to work out at the high school level. Montiel, who finished 3-for-3 on the night, drove in an early run for a 1-0 lead in the first that would last until the fifth. That’s when left fielder David Bauer drove in an insurance run with a single, and then two more were scored on errors in the inning. After Cozzolino came in, the Chiefs gave him two more runs for a 6-1 lead heading into the seventh.

“We have 11 seniors on this team, but only one of them has played in a district game before,” Chiefs manager Jason Hamilton said. “I think that our inexperience in district games made us a press a little bit early in the game. Once we got into the flow of the game, we made some big defensive plays early that took away runs from them, I think we started to play a bit more free — the way we always play.”

Going into the district final, Hamilton says he’ll be leaning on his seniors because that’s who he’s learned wins the big ball games for a team. The players on this team carry themselves with great pride and are ready to shine after missing out on two straight years of districts due to COVID, 2020 was canceled and Gibbons fielded their junior varsity team in 2021 against Somerset in the semifinal after the varsity team got sick. Simply put, they don’t want to lose.

The first pitch for Thursday’s contest is set for 7 p.m. at American Heritage-Delray and both teams are sure to have the last matchup between these two teams in mind in the day leading up to it. The Stallions beat the Chiefs, 10-0, on April 13 in Delray. Hamilton says his team will make the adjustment to avenge that loss.

“We don’t really change anything,” he said. “We got to play them here a couple of weeks ago and they beat us pretty good. It’s at their home place and our mindset does not change. We have a better idea of what to expect now. Their record is very deceiving. They are a very good baseball team. We don’t take anyone lightly to begin with, and we’re definitely not going to take them lightly at their home field for a district championship.”