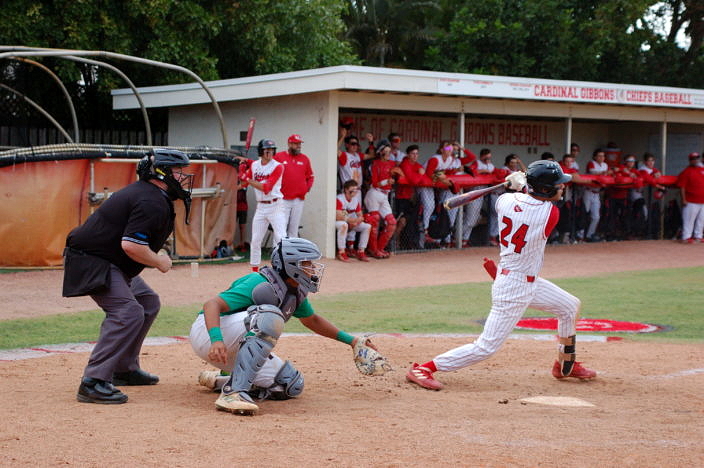 Shortstop Aidan Hernandez drives in the go-ahead run for Gibbons in the bottom of the sixth.

Cardinal Gibbons (18-9) and St. Brendan (13-10) appeared destined to play extra innings in the 4A regional quarterfinals on Wednesday, but the Chiefs came through with another timely base hit and a 3-2 win, to advance to the semifinals for the first time since 2019.

Senior shortstop Aidan Hernandez singled up the middle to bring in Shane Keleher and break a 2-2 tie in the bottom of the sixth inning. That run would end up being the difference after a 1-2-3 top of the seventh from Cole Cozzolino closed things out. It’s not the first time Chiefs manager Jason Hamilton has seen his club come out of the gates slow, but he’s learned to trust them and their ability to come back.

“I think the difference between this week and last week is that last week we were pressing a little bit,” Hamilton said. “When (St. Brendan) went up 2-0, the atmosphere was totally different in the dugout. I think that experience came into play. We have 10 seniors in this dugout. Just the whole game, after the first inning, we felt like we had the tempo.

We had the momentum in our dugout and I think that every one of our kids thought we were going to break through at some point. It’s what we usually do. Somebody’s going to get on, we’ll bunt them over and get a game-winning hit. It played out the right way for us today.”

It’s easy to feel confident when you’ve got someone like Cozzolino on the mound, though. Even though Gibbons trailed early, it wasn’t at the fault of their starter. A pair of errors helped the Sabres strike first, but that didn’t deter the junior lefty. He went the distance striking out five over seven innings of work and needed just 93 pitches to do it.

“It was straight adrenaline,” Cozzolino said of the seventh inning. “Every time I go out there, I want to do something crazy like throw a complete game. I’ve got that fire in me, so as long coach gave me the okay I was going back out there to get the job done.” 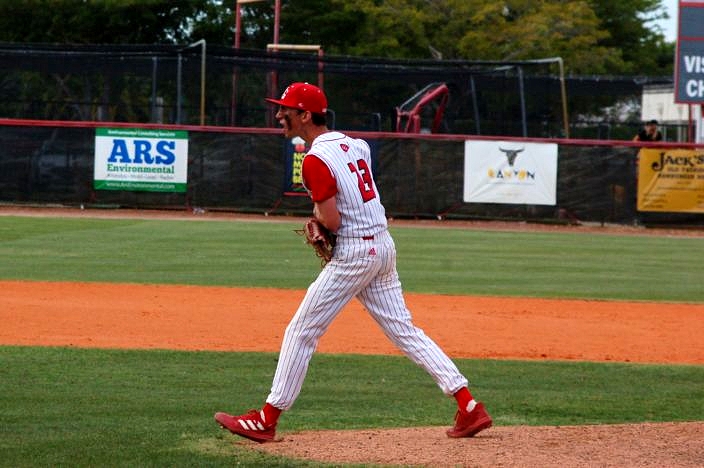 Left-hander Cole Cozzolino celebrates after finishing off a complete game.

As well as Cozzolino pitched, St Brendan’s starter Lucas Fernandez did his best to match him. He lasted five innings and left the game a tie, but the bullpen couldn’t back him up on this particular afternoon. Hamilton credited Gibbons’ slow start to Fernandez’s efforts taking away any partial credit from the gusts of wind that killed any and every fly ball in the contest.

“I think their guy (L. Fernandez) did a nice job keeping us off-balance,” Hamilton said. “We had a good plan going into it. We’ve played here many times with the wind blowing in at 20 miles per hour, so we knew what to expect coming in. I think we left some runs out there. We had second and third with one out, second and third with two outs and even bases loaded with two outs at one point but didn’t push any runs across.”

As one would expect, St. Brendan manager Jorge Robles was also complimentary of his starter. 93 pitches is as much as he could ask for from a junior that he needs to protect for next season and the long term.

“He’s done a great job all year throwing strikes and battling on the mound,” Robles said. “I know that next year he’s going to be stronger and he’s going to put in a lot of work in the offseason to come back better.”

Although he was frustrated following the loss, Fernandez took this as the learning experience it was and vowed to build on next year as a senior team leader.

“You just have to learn,” Fernandez said. “We played good. We didn’t struggle, we did our best, we tried to work with what we had. It was just difficult, and it’s a tough loss, especially for seniors in their last games, but we all did our best. I’m proud to play with this team.” 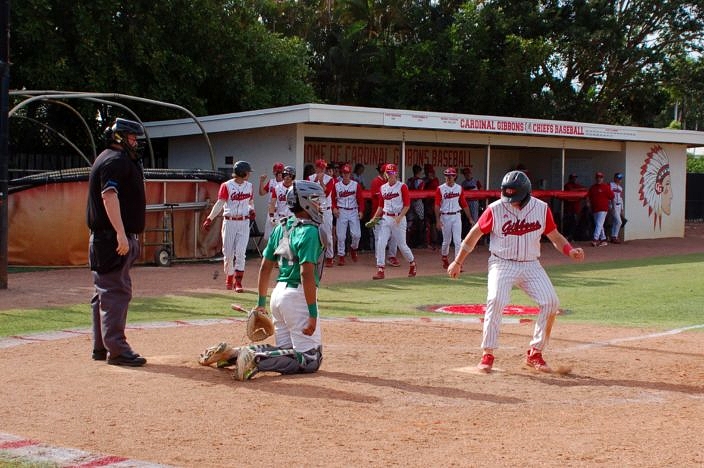 Kellen Hirsch scores the game-tying run thanks to a bases-loaded walk in the fourth.

Robles shares his ace’s optimism for next season. A 13-10 record might not look like much on the surface, but the Sabres managed several quality wins over the season and battled against some of South Florida’s best. Six seniors move on from the program following this loss, but eight juniors are ready to step up in their place.

“We had three tough games in a row,” Robles said. “I think we battled through all three games, but we didn’t get the breaks. I mean, the last inning we hit two balls that you couldn’t hit any harder and it was right at him. Sometimes, that’s all you can do.”

For Gibbons, the time is now to get things done. Hamilton has seen success before and there’s something familiar about this 2022 club that has him thinking about a potential trip to Ft. Myers. The Chiefs will host the Island Coast Gators on Saturday at 4 p.m. in the regional semifinal. The winner awaits an outcome later the night out of the Key West-Miami Springs game.

“It’s just a fun bunch. If you’re a high school baseball traditionalist or enthusiast, you’re going to want to watch this team.” “We play with a lot of emotion. We don’t have a Division I player on our team. We’re just a blue-collar bunch of guys that just grind and grind and grind. They refuse to lose and that’s a characteristic of our 2019 team that went to the state championship. I had the same feeling today. These guys aren’t going to let us lose, and that’s a good feeling to have this time of year.”