Coral Glades Takes Down Deerfield Beach In 7A-13 Playoffs

Josh Howitt drove in the winning runs for Coral Glades in the bottom of the sixth.

Coral Glades hosted Deerfield Beach earlier in the year and the hometown Jaguars blew out the Bucks, 10-0. This time around, with the season on the line in the first round of the 7A-13 district playoffs, it was a much closer affair.

The big moment on Monday night came in the bottom of the sixth inning when left fielder Josh Howitt broke a 4-4 tie with an RBI single to right field that triggered a series of misthrows and allowed him to come around and score on the play as well. The Jaguars held on to the 6-4 lead and closed things out with a 1-2-3 top of the seventh inning.

For Jaguars manager Joe Franco, this win comes with mixed emotions. His team walked eight batters and committed four errors with the reigning 7A state champions up next on Wednesday. Another slow start can’t happen if Coral Glades is going to play upset to the Douglas Eagles like they plan to. Still, the pitchers worked their way out of several jams and kept the team in this one long enough to mount a comeback, and that’s something to take pride in.

“I was really happy with how the kids fought through the adversity tonight,” Franco said. “We were able to use three guys on the mound tonight that really helped us compete. We got down early and the kids fought back. I’m really happy with the way they believed in themselves. You’re facing a really good pitcher that Deerfield has, and he’s a legit pitcher that’s going to play college ball in a couple of years. I was really impressed with him for sure, but our kids fought through our worst defensive game all year.

“They played complacently and we kept telling them not to because anything can happen in the playoffs and we almost lost. But they came back and we’re real proud of them and ready for what’s next.” 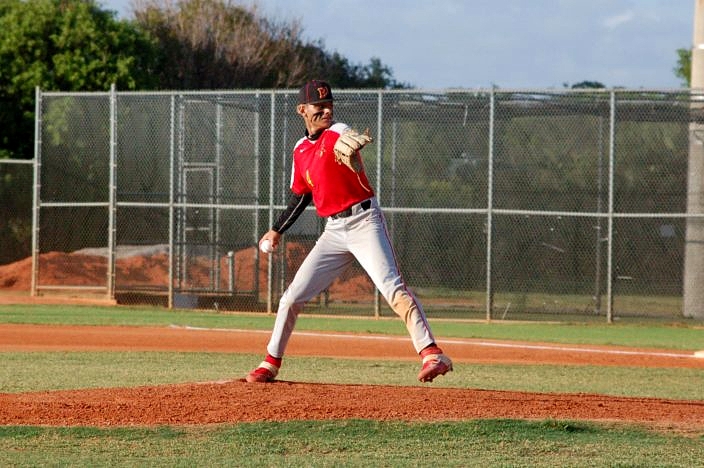 Lorenzo Feliciano struck out 11 Jaguars in the loss.

Franco’s praise for Feliciano’s work doesn’t come unwarranted. He pitched all six innings for the Bucks and struck out 11 while surrendering four earned runs, a marked improvement from his last start against Glades which only went three innings. Feliciano is also the one that drove in the Bucks’ third run of the ball game and kept the sixth inning rally going to tie things up. Although it’s a tough loss to swallow, Feliciano was proud of the improvements he made and looks forward to putting all of the pieces together as a senior next season.

“I felt a lot more confident this time than I did in the last outing against them,” Feliciano said. “I did much better than the previous game. I studied a little bit and I got them.”

For other members of the Deerfield Beach team, this was the final game of their high school careers. Senior Janelle Calvet, who started the sixth inning rally for the Bucks with a hard-hit single past the third baseman, couldn’t help but reflect on the bond her club has formed over the years together.

“It’s family,” Calvet said. “We all have each other’s back and I wouldn’t want to do it without any of them. I think as time has gone on we’ve gotten closer and we knew that we needed to keep our momentum up today. We didn’t miss that at all today.”

Bucks manager Drew Phillips has done a fine job in his first year at the helm. He’s led a relatively young team to the program’s first winning record in over a decade, excluding the 2020 team’s 8-2 early finish due to the COVID-19 pandemic. He’ll look to build on what should be considered a successful season with his ace in tow. Phillips calls Feliciano the “best-kept secret in Broward,” and aims to put the county on notice in 2023.

“Hopefully, this leaves a bad taste in their mouths,” Phillips said. “I told them just now that next season starts today. They’ve got work to do, we’re going to get after it in the weight room and we’ve got to get better.” 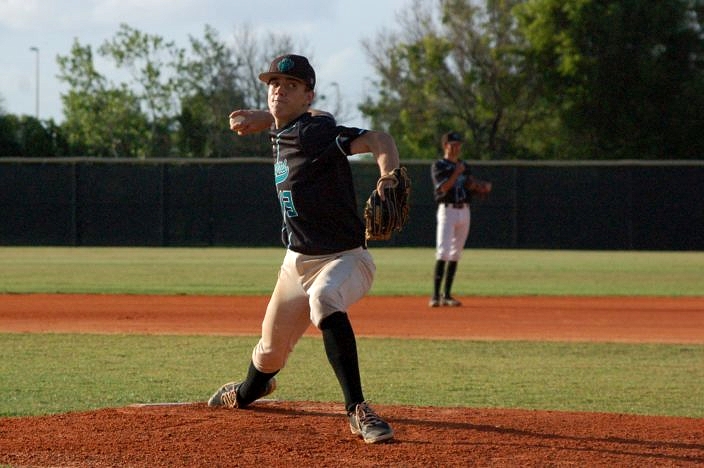 Andrew Allison gets the start for Coral Glades in the opening round of the 7A-13 district playoffs.

The semifinal round of the 7A-13 playoffs takes place on Tuesday and Wednesday with a matchup between third-seeded Monarch and second-seeded Taravella in one semi-final, while Coral Glades will battle Stoneman Douglas in the other. On Thursday the championship game commences.

A trio of umpires worked this matchup: Albert Martinez served as the first-base umpire, Brett Belsky was at third base and Ken Weber called balls and strikes behind the dish.