Written by Anthony Uttariello on May 6th, 2022 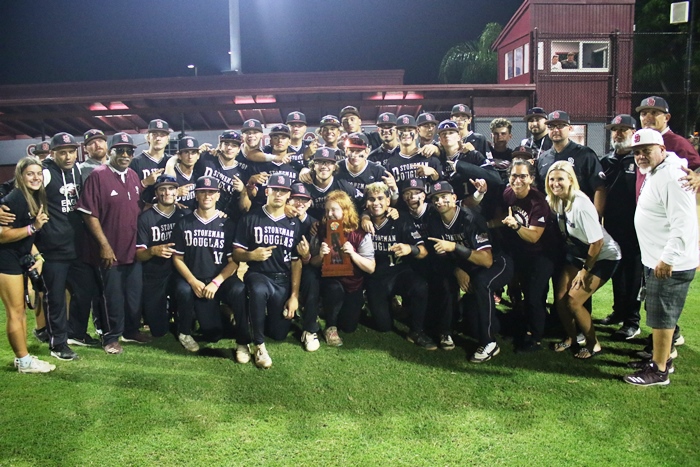 If you ask Manager Todd Fitz-Gerald about his teams motivation to avenge one of their only two losses of the season, an opening game defeat at the hands of rival Taravella, the coach will downplay the revenge game.

“The kids always get hyped up, and they were definitely looking forward to this game tonight,” said Fitz-Gerald, after his team shut out the Trojans Thursday night 5-0 to win the 7A-13 title.

But. If you ask the players, it is clear that the players had a little more motivation than usual.

“Yeah, what has it been, if I’m not mistaken, 72 days since that happened,” said starting and winning pitcher Chris Arroyo. “We were wanting to get back to this game and play better, because we didn’t play our best in that first game. Today, we were focused on executing, and also winning a district championship.”

Focus has not been an issue for the Eagles this season. The defending 7A champions came into the season with lofty expectations, and a large core of returning players from that state title team. Despite that pressure, as well as the pressure of being one of the top ranked teams in the country, Douglas has cruised to a 25-2 record.

“Our first goal was to win the national tournament in North Carolina, which we did,” said Fitz-Gerald. “Then, we wanted to win the district championship, and we did that tonight. Now, we have to focus on winning the next three games and winning a regional title. It is all steps, but we also know that in this game, it can end in an instant. Plenty of top-ranked teams lose. So we just have to stay focused on one game at a time.” 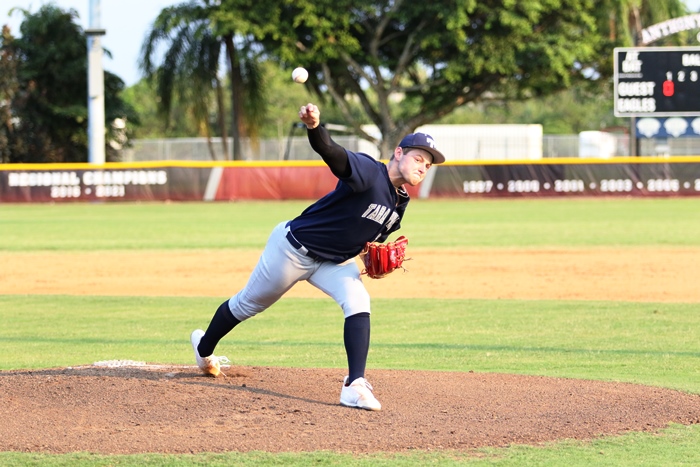 The district title game played out much like the first game of the year between the two teams, but on Thursday it was Douglas who came up with a few big hits in key situations.

Arroyo was one of those pitchers, as he went the first five innings, and while he flirted with trouble in each inning, the lefty was able to work out of several jams. Arroyo struck out 10 Trojans, while walking one.

“You always focus on getting the first out of an inning,” said Arroyo. “It’s something that we stress. Tonight, for whatever reason, that wasn’t happening. So I had to make sure to execute pitches when we needed to, and I was able to do that.”

After giving up two runs in the first inning, Trojans starter Tyler Gray settled down. On the night, he went four innings, allowing only one earned run.

The Eagles were led offensively by catcher Santiago Ordonez, who went 2-for-3, with an RBI. But Ordonez was quick to deflect the spotlight.

“We have a team where anyone can be the hero on any day,” said Ordonez. “Our approach is simple, to keep the train moving. We just want to get to the next guy in the lineup. We have confidence that anyone in our lineup can come through, and we all trust each other.”

One of the new additions this year to the lineup is ace Christian Rodriguez. After getting only 21 at-bats as a sophomore, the junior has 60 at-bats this year, and has been a key contributor to the Eagles offense. Thursday night, Rodriguez had two big at-bats.

The first came in the first frame, when he put the ball in play on a groundout to shortstop, upping the Eagles lead to 2-0 early. The second came on a safety squeeze in the bottom of the fifth. In a day and age when the long ball is glorified, Rodriguez’ at-bats, willingness to do the small things, and execution did not go unnoticed.

“We work on fundamentals all the time,” said Fitz-Gerald. “Those two at-bats won’t get talked about much, but they were a big part of us winning the game tonight.”

Rodriguez then did his thing on the mound, throwing the final two innings on the mound for Douglas. 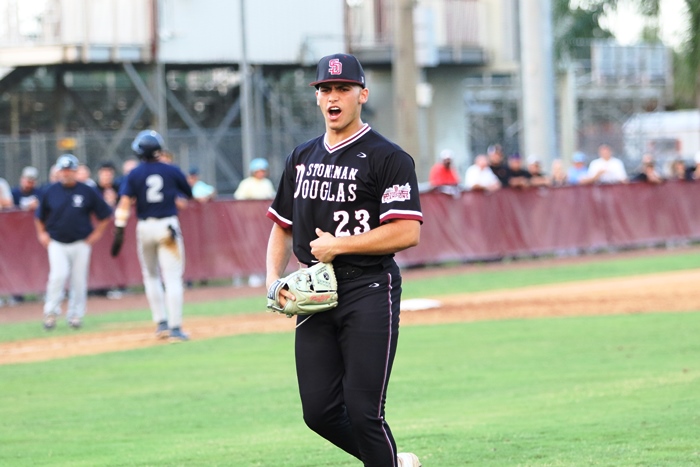 The win moves the top-seeded Eagles into a regional quarterfinal at home on Tuesday, where their likely opponent will be either West Broward or Braddock.

For the Trojans, who was the second ranked team in the region, they will go on the road as the #5 seed to face #4 Palmetto, a team that upset Southwest in the 7A-16 title game.

If both Douglas and Taravella win their regional quarterfinal games Tuesday, they would end up right back at Douglas next Friday in a regional semifinal.

“It was a tough loss tonight,” said Giummule. “But if we both win Tuesday, it will set up a loser-go-home game next Friday. While that would be fun, all we can do is focus on our opponent on Tuesday.”