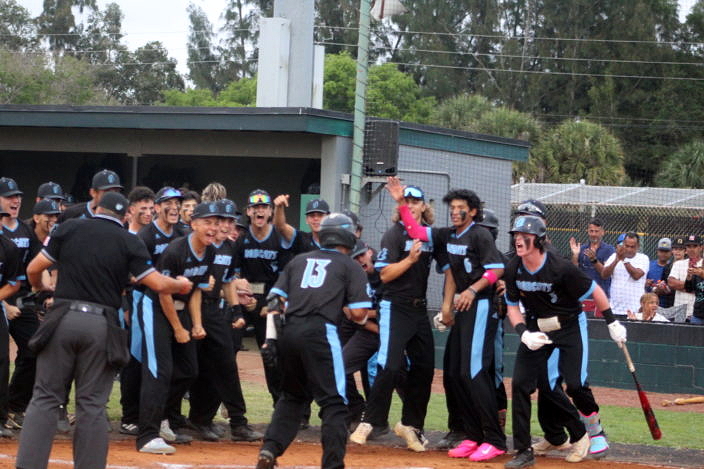 It was high school playoff baseball at its absolute finest on Tuesday night. Of course when neighborhood and district rivals West Broward and Flanagan get together, would anyone expect anything less?

An overflow standing-room-only crowd at Flanagan High School got treated to a great contest between HSBN’s No. 11 ranked (West Broward) and No. 5 ranked (Flanagan) teams that went right down to the final at-bat.

And when it was over, it was the Flanagan players who stormed the mound to mob relief pitcher Jesus Delgado who, with the tying run on base, got Brandon Vargas to line out to shortstop Bruno Schafer to end the game and give the Falcons a 4-3 victory over the Bobcats in a 7A-14 district semifinal contest.

The win advances No. 3 seeded Flanagan, which was the designated visiting team despite playing on its home field (with WB being the No. 2 seed) into the 7A-14 championship game on Thursday, May 5 at 7 p.m. where the Falcons will take on top-seeded Western after the Wildcats cruised past Cypress Bay 7-0 in the earlier semifinal.

The only sad part for the Falcons was that starting pitcher Jaime Gonzalez wasn’t out there to enjoy the moment. In a courageous, gutsy performance, Gonzalez, just a year removed from Tommy John surgery on his right arm, was brilliant on the mound all night long.

Despite having to watch his outfield mishandle three different fly balls and infield commit two errors, Gonzalez, after giving up a home run in the first inning off the bat of Vargas to fall behind 1-0, was nearly invincible on the mound. Having not thrown more than 70 pitches in a game this season, he was at 90 after six innings and still managed to talk his manager Noel Figueroa into letting him go out there and try to finish it out in the last inning. When he hit Andrew Alvarez to start the inning putting the tying run on base, his night was over as he handed the ball to Delgado.

“Such a great moment for Jaime tonight and I’m so proud of him,” said Figueroa. “He’s been pitching well every time he’s gone out but we kept him down on pitch count all season for obvious reasons. But tonight was a playoff game so we were comfortable letting him go and he was phenomenal out there. He actually convinced our pitching coach and myself to let him stay in and start the seventh inning but once he hit that batter, that was it. But what he had to overcome tonight with all of the defensive struggles we had just tells you everything you need to know about him. He could’ve just tossed it in but he kept his poise, wanted the ball every inning yelling ‘let’s go, let’s go.’ It tells you a lot about his inner spirit. He deserved this moment tonight.” 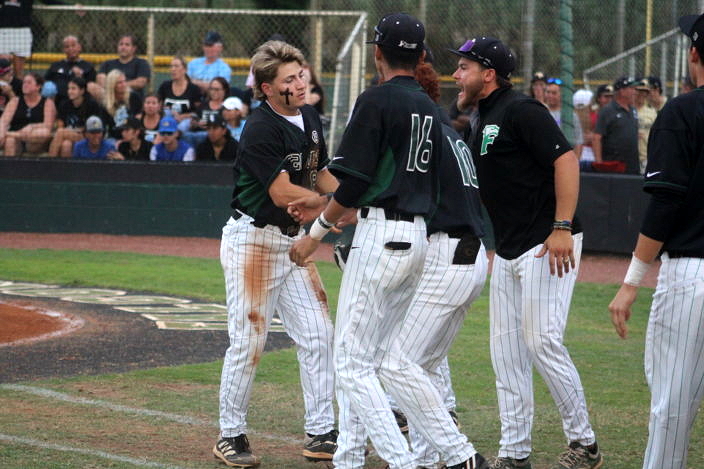 Flanagan’s Joseph Roberts is congratulated by teammates after scoring a third inning run to give his team the lead.

Gonzalez wound up yielding just four hits and the other two Bobcat runs, one each in the fourth and fifth, were unearned.

“I was real happy they let me go out there to try and finish it,” said Gonzalez. “I had been pitching the whole game and really wanted the ball in my hands but things happen and once I hit their leadoff guy, I knew that was it. But I’ve got another teammate that had my back in Jesus and it all worked out.”

But not without a bonified “lump-in-your-throat” moment. After Delgado got a strikeout for the first out, West Broward’s best hitter and one of the best hitters in Broward County, Derek Bermudez stepped up to the plate. When Bermudez turned on a 1-1 fast ball, he launched a shot high into the night air that appeared to have two-run walk-off winning home run written all over it.

But Flanagan left fielder Danny Herrera, who had had a nightmare of an evening to that point having misplayed two fly balls, made amends as he hustled all the way back to the fence and, with his back literally to the fence, reached up to make the catch for the second out.

“When I saw it come off the bat, I knew it was well hit and headed back to the fence as fast as I could get back there and fortunately it came down just before it got over,” said Herrera. “It was a tough night for me up to that point but like everyone says, sometimes baseball is a mental game and tests your mental abilities. You just have to have a short memory, push through the difficult moments and keep going.”

In arguably the toughest district in South Florida, both Western and Flanagan will advance to the regional playoffs next week no matter the outcome of Thursday’s game. And likely West Broward as well. The winner will get to be a top four seed and enjoy a first round home game while the loser and West Broward will go in as Region 4-7A wild card entries and travel.

“Give Flanagan credit, it was a great game tonight but they were just a little better than us,” said West Broward manager Howard Stein who saw his team fall to 14-11-1. “Hopefully we’ll still make it in and get another shot in the playoffs. We’re going to have to hope a lot of the district stuff in Miami goes like it’s supposed to go, otherwise, this would be a tough way for the season to end.” 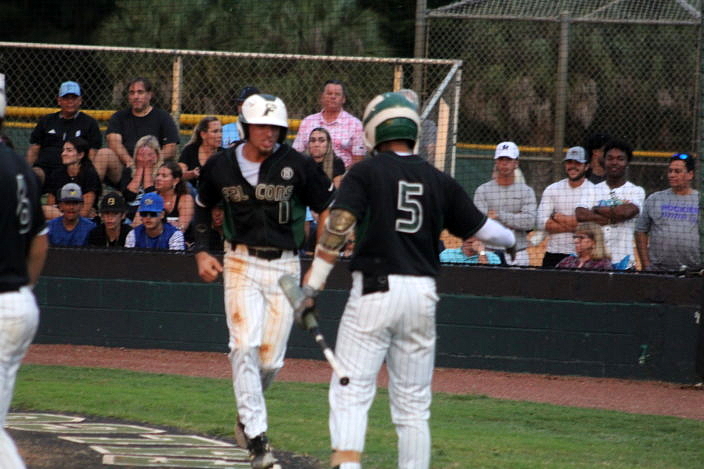