Heritage Falls To Naples In Region 5A-4 Final 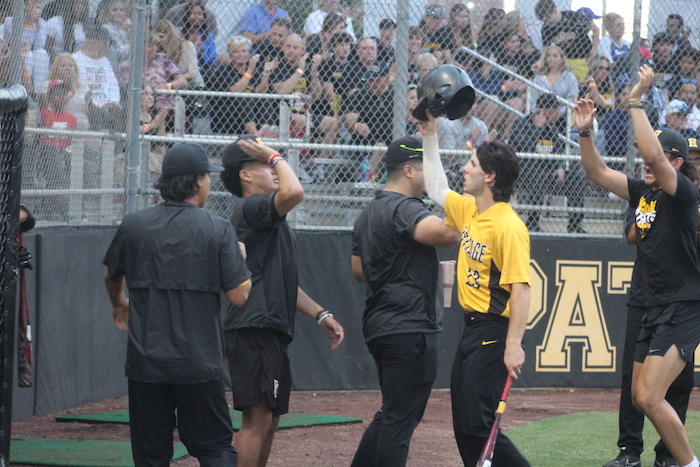 Heritage’s Zain Diaco celebrates after crossing the plate with his team’s first run in the second inning.

The frustration and disappointment was etched on faces everywhere.

Plantation American Heritage manager Mike Macey addressed his devastated players for the final time in the 2022 season. Nobody thought three hours earlier that Macey would be giving that speech.

The speech they anticipated, the one they had hoped for was going to be the one where they were making their travel plans to head west to Fort Myers to play in the final four at Hammond Stadium.

But the Patriots found out a tough lesson on Monday night. A baseball doesn’t care that you have a 26-1 record or that you have a No. 19 national ranking in Baseball America. You still have to go out there and beat the other nine guys on the other side of the diamond.

The Naples Golden Eagles didn’t care about all the hype surrounding this team either and promptly went out and stunned Heritage by a 4-2 final in a Region 4-5A final, thus ending their season short of what they had hoped might bring the program its third state title.

Naples (22-9) advances to the state final four for only the second time in program history and first since 2009 when they won the state title. The Golden Eagles will take on Tampa Jesuit in a Class 4A state semifinal at Hammond Stadium in Fort Myers this Thursday, May 19 at 1 p.m.

“All year long, we’ve gotten the big hit when we needed it and it just didn’t happen tonight,” said Macey. “When they needed a big pitch, they got it. When they need a big strikeout, they got it. When we needed a big hit, we didn’t get it. I just think when it came down to it, maybe we pressed a little bit but I don’t know – I mean these guys have come up big all year long and tonight it just didn’t happen, that’s baseball for you.” 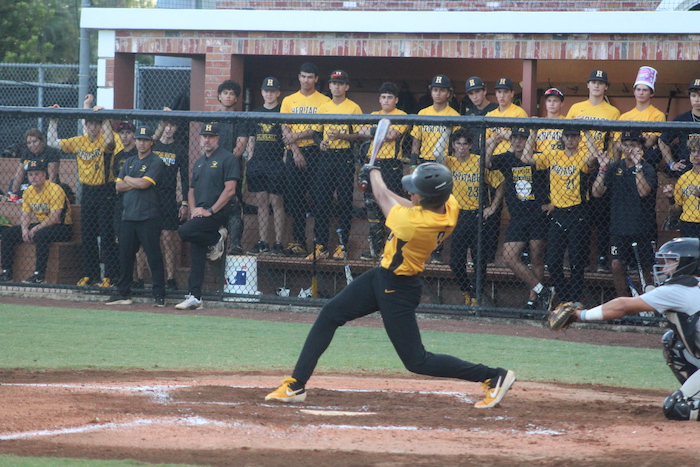 Heritage’s No. 2 hitter Ray Bermudez take a hard cut and flies out to third base in the first inning.

Macey was spot on when talking about not getting the big hit. What might give him sleepless nights in the coming weeks was the opportunities the Patriots squandered between the third and sixth innings.

Over those four innings, after being locked in a 1-1 tie after two, Heritage left a total of nine runners on base and seven of those in scoring position. Meanwhile, Heritage starter Erik Blair hung tough through four-plus innings of work giving up just one run, a Johnny King RBI single in the first staking the Golden Eagles to an early 1-0 lead and watching his team tie it with a run in the second on a two-out RBI single by Chris Levy.

He then had to watch as the Patriots had runners on second and third with no outs in the third, only to strike out three straight times to end the inning. Heritage then loaded the bases with one out in the fourth before Ray Bermudez hit into an inning-ending 4-6-3 double play.

After Naples then scored three times in the top of the fifth to grab a 4-1 lead (all three runs coming with two outs), the Patriots put runners on first and second with one out in the bottom of the inning. But Lucas Ramirez struck out and then, to exemplify Heritage’s frustration on the evening, Zain Diaco hit a line shot right up the middle – that Naples pitcher Johnny King speared with his glove ending the inning.

Heritage then put a two-out rally together in the sixth when Spencer Butt walked and Bermudez doubled him to third. But Blair struck out to end the inning. Even down to literally their last strike though, the Patriots kept fighting.

Pinch hitter Manual Henriquez reached on an infield single and moved to second on a throwing error at second base. Diaco then singled him home with a base hit to right making it 4-2 which brought the tying run to the plate in pinch hitter Brian Cordero. But King cut down Cordero swinging on a 3-2 count ending the game and prompting a Golden Eagles celebration. 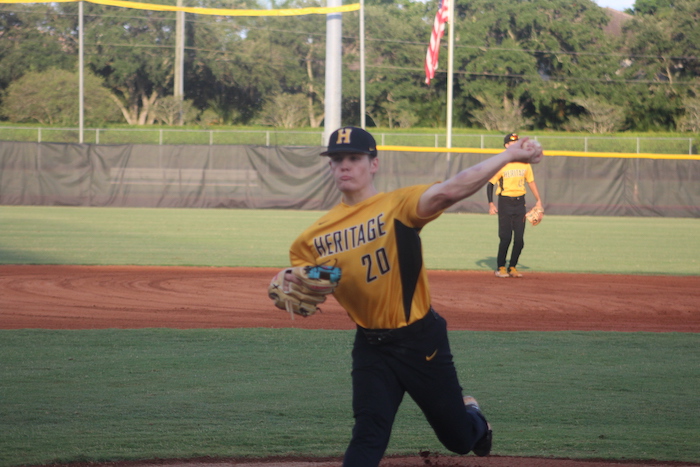 The loss marked the eighth consecutive in regional play for Heritage since last making it to the state final four in 2012 when they won the 5A title.

“It was a great season and I’m not going to take that away from these kids,” said Macey. “We came back from deficits of seven runs multiple times with multiple walk-off wins – these kids never quit. They fought until the end in every single game and look at tonight – nobody on, two outs and they still kept battling. That was our season in a nutshell, they never quit. We also had the best regular season record in program history, had 22 or 23 straight wins, I’m not even sure what it was, but that was a school record. They accomplished a lot and I don’t want to take anything away from them.”